The hosts’ partnership began when Caroline Blazovsky—or “Caroline B,” to listeners—reached out to Eric Goranson (Eric G) on social media. Eric had been hosting Around the House as a solo podcast for several years, and as the two built a relationship, Caroline was a guest on the show several times. Their friendship later evolved into a co-host relationship.

As Eric states, “I decided I wanted to do something different, so I mixed things up a little bit. I mentioned to Caroline that I was looking for a co-host, and she goes, ‘Well, why not me?’ And that’s how we began. It was really that simple and very organic.”

Like many others, the podcast started as a radio show—one with a rich history that dates back over 33 years. Eric became the show’s fourth host about seven years ago and quickly realized the need for redesign.

“At that time, there were a lot of retired handymen doing home improvement shows. And you know, that’s really great for the 45- to 65-year-old homeowner, but there is this whole new generation of homeowners who don’t really relate to that. And, not throwing any shade at the previous host, but the music was even 1940s jazz. I’m like, ‘No, we’re going to rock and roll!’ “We’ve really geared things toward a younger audience. The ironic part is that we’ve actually kept most of our older audience. We’ve gained a lot of 30- to 45-year-old homeowners really just trying to figure this stuff out, because they didn’t have a great role model in their life to show them home improvement.” 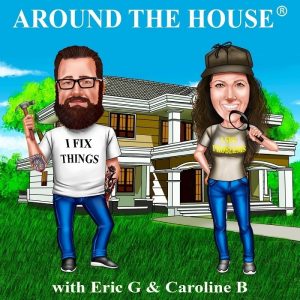 Caroline’s background in radio also worked to her advantage. “I thought I wanted to be an anchor or newsperson, but after interviewing one person and having to ask really hard questions—‘Your son just died on the gym floor. How do you feel?’—I was like, ‘Whoa. This is not me. I can’t do this… it’s just not happening.’”

Instead, Caroline spent time after graduate school in an internship program with Howard Stern. After that, she started working in the Healthy Home industry.

“I’ve been an environmental consultant for 22 years. So this kind of happened organically—this direction, anyway, simply because of what was going on in my real life. It’s crazy that Eric and I both started in radio, and then we both had Home Improvement careers for a very long time. Now, we’re back in podcasts and radio again,” says Caroline.

Interestingly enough for a home improvement podcast, the focus is not necessarily on home improvement. The goal for Eric and Caroline is to be more of a fun lifestyle show.

“When we book guests, we don’t want them reading a brochure to the audience. We want the funniest person in the organization who embodies the company’s passion. We don’t care about someone’s title. We want the fun guy—the one a company’s marketing department is nervous about putting on a show,” shares Eric.

To illustrate the point, Eric and Caroline recently brought a guest on the show to discuss bathroom fans and funny connotations that go with that. Alongside that discussion was another around the guest’s hobby—baking sourdough bread. In another instance, a guest came on to talk about water treatment who was also a knife connoisseur.

“We try to go beyond the corporate to get to who they really are,” says Caroline.

Future plans for the podcast include occasionally bringing in a live audience for more interaction.

“Caroline and I have a big goal—we don’t want people just calling in and listening to us talk about fixing toilets and gutters for two hours. We want to do some deep dives but also have fun with musical guests and lifestyle trends. We really want to entertain,” laughs Eric.

Eric and Caroline’s distinctive personalities and wealth of knowledge and experience makes the Around the House podcast an entertaining and educational playlist addition. Relax, listen to the music, and remodel your healthy home!