We have become accustomed to using our voices to control our environment, find information, and get where we want to go. But have you ever thought about how that technology came to be and improved to the point of working more than frustrating?

Enter Carl Robinson, voice developer and host of the Voice Tech Podcast. But Carl hasn’t always been involved in the technology of voice.

British by birth, Carl went on to enter the world of healthcare. He created a top app on iTunes around nutrition and then sold it to move on to other opportunities in health and wellness.

After developing a chatbot solution for patients with diabetes, a question popped into Carl’s mind: “Wouldn’t it be great if patients could talk to the chatbot and get back information in their own language? Wouldn’t that be a lot more impactful?”

And that is what instilled in him the drive to pursue voice tech. 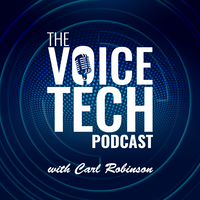 While living in Beijing, he launched a few startups while developing a passion for all things audio. It was there that he also met the love of his life, Veronique. The couple moved to France, and Carl set out to earn his degree in data science. (Congratulations to the couple, as they are expecting a baby this month!)

And while Covid has kept Carl physically stationary in Paris, it hasn’t stopped his work. His weekly newsletter, Voice Chops Tuesdays, is filled with insights into voice technology and how it can be used around the world. He is also hard at work developing Rumble Studio, which makes it easier for creators to publish audio content no matter their experience level.

I actually reviewed the Voice Tech Podcast in the May 2020 issue of Podcast Magazine. I since decided to feature Carl, because his podcast and newsletter have taught me quite a bit about a topic I knew little about.

Carl doesn’t feel that voice will be the “final computer interface.” Rather, he views it as “an intermediate step” toward the future, where voice will combine seamlessly with other modalities. In other words, according to Carl, in the future, devices will “be like friends”; they’ll be able to look at you and “know what you need by your voice and face.”

What I loved about speaking with Carl is this view of the future. In my May review, I mentioned Star Trek and its computer interface, and how voice enables a level of interaction with our tech that aids the visual. Carl’s show speaks to how voice, when combined with the visual, can expand our ability to get things done, and that to me is the essence of the best of tech. Speaking to Carl reassured me that tech doesn’t take over in the future, but is rather an essential component of a beautiful symbiosis with voice, which can create a better future.

A big driver for Carl is his focus on lowering the barrier of entry into the world of podcasting via Rumble Studio and his podcast. This way, new podcasters who have maybe never conducted an interview or put their voice out into the world can get started on the right foot. We had a deep conversation about how Anchor, a free podcast hosting platform, is big in Africa, because it does exactly that in a different way than what he is developing.

I think my favorite part of Carl’s mission via Rumble Studio, though, is that it takes into account personal and global issues related to podcasting. For example, it allows those without an actual voice to use a computer-generated voice to ask questions of their guests! Truly a barrier-free solution. Voice communications drop many other barriers, as well, including those related to translation. He even created a solution around time zone differences, seeing as how they can make it difficult to find a common time to interview. His platform allows one person to send questions and the other to answer them in their respected time zones. From there, the final product is merged with audio cleanup.

Carl is clearly driven to educate people on how voice can be used to improve the world, making it even easier to use your own to create positive change even faster along the way.