There’s no shortage of fan-based Trekkie shows, but Shereese Alexander and Andrea Redmond stand out from the crowd with The TNG Podcast.

Referring to themselves as “real-world nerds,” Andrea and Shereese hold several degrees between them, including marine biology, microbiology, immunology, and molecular genetics.

Yet their passion is sci-fi. These real-life best friends are happy to geek out over Star Trek: The Next Generation (and anything else sci-fi) while sipping hot Earl Grey tea.

They keep listeners hooked with their weekly episode-by-episode “tear down” of the seven seasons of the massively popular TV show.

Andrea explained, “After we became friends, in some of our conversations, we talked about how much we loved watching Star Trek: The Next Generation while we were growing up. We would usually find ourselves cracking up during those conversations, and we thought we ought to bottle them and turn them into a podcast.”

The first episode of The TNG Podcast was released in May 2020 while Shereese and Andrea were teaching virtually. They found that they had tons of extra energy, because they weren’t commuting, and they channeled that energy into starting the podcast.

Shereese pointed out, “Our podcast is unique because we break down the science of the show. Plus, as women who are BIPOC [Black, Indigenous, and People of Color], we bring a different perspective. We look at each episode through the lens of diversity, equity, and inclusion.

“We were fortunate to interview an actor who was on Star Trek: The Next Generation as an extra, and we also discuss set design, character development, and fun things that are accessible to everybody.

“One of our listeners commented on the fact that we talked about a character’s ‘really dope outfit.’ She said when she heard that, she knew that our show was for her, rather than any of the other Star Trek podcasts.” 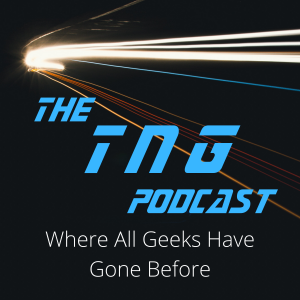 Andrea’s interest in Star Trek began with her dad. “He was an engineer and had a deep love for Star Trek, Star Wars, anything Stars… the Captain Picard character reminds me of him. Since my dad passed away, I find it comforting to watch the show, because it feels like I’m reliving the memory of watching it with him.”

Like many listeners, Andrea’s favorite character is Q. “He is a trickster and scam artist,” she said.

Andrea relates because she likes to play funny pranks on friends and family. “Hopefully, I don’t cause people the number of headaches that Q creates,” she laughed.

“The actor who plays Q, John de Lancie, does an incredible job. He makes me wish I were a fly on the wall for the adventures aboard the ship. I would love to ask John whether there was a lot of pressure, as I imagine there was, to play the first new alien to be introduced on The Next Generation. I wonder how much of himself he brought to the character and what it was like to create a rascal character from scratch.”

Andrea is also one for adventure. “I spend my time off stand-up paddling, skateboarding, or hiking and camping with my eight-pound puppy. I’m also passionate about cooking, decorating, and crafts. That’s why set decoration catches my attention when we watch Star Trek episodes.

“On a typical Saturday or Sunday morning, I wake up and ride my bike to the farmers’ market, go rock-climbing for two-and-a-half hours, go surfing at sunset, and at the end of the day, I might make a cocktail and read a book or watch a movie with friends.”

Shereese described herself as “an introvert who is the exact opposite of Andrea. When I am not teaching or sci-fi-ing, I use my Oculus, a virtual reality headset, to work out, watch movies, or play games.

“I also spend a lot of my time working with clients in the online business world.”

Shereese’s favorite character is Data, played by Brent Spiner. “Data wants to become more human, so all his interactions are intended to help us understand humanity better. I always felt like that as a kid… like an outsider looking in. I didn’t understand people’s emotions and reactions.

“Brent Spiner is very prolific, and apparently, he has acted in lots of blockbuster movies as well as tiny films and shows. If I had the chance to interview him, I would ask him about his favorite character. I’m curious which one he is most proud of.

“Data is a very iconic character, and Brent has a lot of range as an actor. The challenge with a show like Star Trek is that a lot of the characters simply give instructions and explanations, so you don’t really get to see their acting chops. Once in a while, something crazy happens on an episode, and you get to see the actors’ talents. Data has no emotion or personality, and there’s nothing dynamic about the way he interacts with others, so I wonder if that character stretched Brent the most.”

When Shereese and Andrea asked a segment of their audience why Star Trek: The Next Generation is important to them, the consensus seemed to be that the show is full of exploration, beauty, and creation.

“Many people are still captivated by Star Trek today because it explains the human condition, and there are so many characters in the franchise, every fan can find one to identify with,” Andrea noted.

Shereese added, “We actively encourage our listeners to engage with us on Instagram and via email. We always get a kick out of hearing their opinions, because it helps us have a fresh perspective and allows everyone to have their voices heard.”

Shereese summed up the reason people are drawn to their show: “I think our listeners like us because we’re nerds and Star Trek fans like they are, so it feels a bit like a kinship—a conversation with a bunch of friends about Star Trek episodes we love. When someone listens to our show, they’re invited into our friendship.”

Everyone is welcome to join in the fun on The TNG Podcast.