What? What’s the matter?

Your hair. It’s all snakes. Look in the mirror.

Oh, for Heaven’s sakes. Get Alba in here.

Getting sick in a fairy-tale world is no joke. Never mind the diagnosis—what about the cure?

“Alba Salix, Royal Physician is a fantasy hospital sitcom basically about a witch who runs a little clinic with her less-than-helpful assistants and takes care of people in a fairy-tale kingdom,” said Eli Hamada McIlveen, creator of Alba Salix. “I basically equate it to Shrek meets House.”

McIlveen drew his inspiration from the idea of putting two previously unrelated concepts together in a fresh, new way.

“I’d been writing various scripts and testing out different ideas. And, for some reason, the combination of a hospital show with a fairy-tale world really landed. There’s a million hospital shows for a reason; it’s a format that stands up and launches a million stories. Fairy tales, on the other hand, give you another well to draw on. Combining the two, the ideas just started to flow.”

McIlveen found that working in a podcast format helped him merge his many talents. “For me, I’d always listen to radio drama up here on the CBC [Canadian Broadcasting Corporation]. They did a lot of amazing productions when I was growing up. And I heard a lot of stuff from the BBC as well, like Hitchhiker’s Guide to the Galaxy. I did some work on a series in university radio at the University of Waterloo station here, and I really enjoyed the production side of things. So working on Alba Salix kind of brings together all the things I like: writing, sound design, music, and even directing. I discovered how fun directing is in shaping and guiding performances, as well.” 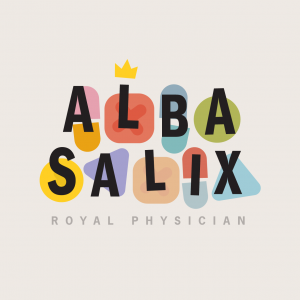 “All of the sound design, the music, everything you hear in Alba is actually produced by Eli,” said Sean Howard, co-founder of the Fable & Folly network and one of the co-creators of Alba Salix. “And this is one of the first things that I think united everything for Eli. I have the easy job on Alba… I’m just producing. I’ve written a little and co-direct, but Eli carries 85 to 90 percent of the weight of the show entirely on his shoulders.”

“Wrangling and feeding the cast is no easy feat either,” interjected McIlveen.

Alba Salix is recorded live, which means Howard is in charge of bringing the actors together to do so. Needless to say, Covid has put a damper on live recording, which is why Season 3 has been delayed.

“Another thing we did differently for Season 3 is creating a virtual writers’ room,” said Howard. “It was my job to go out and talk to other people who have run writers’ rooms, so we could design one we would love. For instance, we wanted everyone to have a voice and input into helping structure the arc versus Eli deciding everything that can happen. I didn’t want it to be us devising all the plotlines and then saying, ‘Okay, go write this for me.’ So that meant going through an iterative process using a variety of weird tools from Google. Not docs, but presentation-type tools—really, anything we could to work out arcs. And then, it was just fascinating to watch the writers start to have a voice and bring in ideas. Once we reached a certain point, each writer got to write whichever episode he or she was most excited about. And it was captivating to watch what they came back and how well it all worked together. It was super fun.”

While Alba Salix is definitely entertainment and escapism wherein “at no point will you hear the word ‘covid,’” being able to work out real-world issues in a fictional world is beneficial.

“That’s one of the fun things about Alba. You think, ‘Oh, it’s a comedy. It’s a fantasy. It’s a cartoon.’ But you can still play with real-world issues that are of concern to us. Like in our spinoff, we focused on gentrification. Remember the days when what we were most worried about in the world were things like gentrification? Eventually, we may do something around Covid, but it’s still a little too new.”

Alba Salix covers the start of the world, but it also includes the spinoff, The Axe & Crown. Additional spinoffs and seasons are planned.

1865: When Truth is Stranger than Fiction