Combine logic, intuition, common sense, fun, and just a bit of fear, and you have the escape- room experience—an activity that grew in popularity over 9000% in the few years prior to 2020, when the pandemic essentially shut the world down.

Makes sense, right? One would have to be physically in the room in order to escape it. Or would s/he?

Escape This Podcast is the creative love child of Dani Siller and Bill Sunderland, a husband-and-wife duo who have effectively brought their mutual love of games to the podcasting medium. Dani is the game master, puzzle creator, and host, while Bill is the producer, handling the backend of not only Escape This Podcast, but of their second fiction podcast, as well—Solve This Murder.

Now, Escape This Podcast is not your normal game-based show. The entire premise is to escape the virtual room—one you can’t see, but picture in your mind’s eye as Dani describes it to you. As a player, you must rely on a keen ear, sense of detail, and equally vivid imagination.

Dani is the ultimate creator:

“I have to write the story before creating the puzzles—that’s really my strength. The puzzles, which are the storytelling medium, come dead last. There has to be a coherent story from start to finish. Like, why would someone be stuck in this room? Sometimes, it’s that some crazy person trapped you in there. But we’ve been leaning away from that a little more, and into ‘What can you get out of this room? What might be hidden in this room that somehow makes your being here make sense?’ It all has to fit. You can’t just stick an elephant in the middle of a bedroom, because it doesn’t belong. But you definitely need a bed, right? 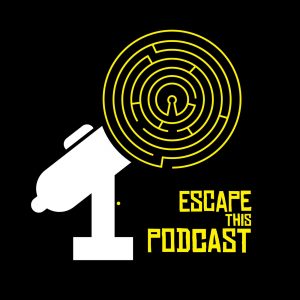 “For someone to truly imagine that s/he is living in it in order to play the game, I have to decipher which objects would be in the room based on the plot. It’s absolutely not arbitrary. Once I’ve done that, then I can have a little fun with it. Like in that bedroom, I can add some posters to the wall. And I get to be creative with that. So, I start with the logic, and then mess around with it a bit later.”

Dani inventories the objects in the room as she goes along, making sure she describes them in written detail, so she can then communicate them to her listeners via audio. Working backward from the escape, Dani makes sure she has designed a clear path to that escape, in a way that listeners won’t generally realize, at first.

“Right at the start, you come up with your end point—what object in the room do people need in order to finish? What’s the last thing they’ll need to do? Let’s say there’s a cupboard in the room. Obviously, you can either open it right away, or there can be some sort of obstacle preventing that. Perhaps it’s locked. Then, you have to figure out other objects to add to the room that could be key to unlocking it.

“I draw arrows from one object to another based on those relationships. Then, I start linking things together to determine the obstacles. Finally, I can sit back and go, ‘Alright… what plan can I make to overcome the obstacles? How am I going to do this? What is the actual puzzle?’”

In addition to handling the backend of the podcast, Bill is also the game tester. But rarely does he help Dani with the actual puzzles.

“There was a moment in our third season when I was really stuck. I went to Bill and said, ‘I don’t know what happens… where I can go from here.’ And he said, ‘Put a donkey in the room,’” laughs Dani.

“He didn’t even know what the room was, at the time. So now, I don’t come to him for any help with that stuff until the first draft is written. Then, we play through it together. Bill is incredible at figuring out what works and what doesn’t, and with coming up with constructive solutions to those problems. So, things don’t tend to change a huge amount, but his input is so valuable.”

For listeners solving the puzzle, notetaking is an important piece of the process. In fact, Dani encourages their audience to post their diagrams and notes to social media. As Dani explains, “I just like seeing how other people get to the solution… how they visualize it. I love when people draw it out and share it!”

With over 200 episodes to date, it seems Dani’s imagination is unlimited—and even celebrities like Neil Patrick Harris have noticed and made guest appearances.

So if you’re a fan of escape rooms, Escape This Podcast is a must-have experience you can begin today!