“Who is dead in the White House?” I demanded from one of the soldiers.

“The president,” he said.

That is the very moment in which the audio drama 1865 begins.

Recently nominated for a People’s Choice podcast award in the category of Storyteller Drama, “1865 tells the story of reconstruction in America,” said Stephen Walters, co-creator, head writer, co-executive producer, and voice of Robert Lincoln of 1865. “It starts in the moment of Lincoln’s assassination and follows one of America’s forgotten heroes, Secretary of War Edwin Stanton, and his fight against Lincoln’s successor, Vice President Andrew Johnson. This battle between Stanton, who is a lifelong abolitionist, and Johnson, who is a confirmed bigot, culminates with the first impeachment proceeding in the history of the United States and sort of precipitates the rise of the KKK, the end of reconstruction, and the beginning of the Jim Crow era.”

It is also the culmination of Walter’s 20-year obsession with the Civil War and the Reconstruction Era.

“It started back when I was a theater major at Baylor University and was assigned John Wilkes Booth as the subject for a research paper. I hate research papers!” Walters said. “But I was teamed up with Eric, who is also the co-creator of the podcast, and we ended up working together in a theater history class, too. We started thinking maybe we should write a play instead of a research paper. So, we went to our professor and asked permission. For some baffling reason, he said ‘Yes.’ So, Eric and I set out to write it, and then that play became a series of plays, which became a TV pitch, which ultimately became 1865, the audio drama.”

So, how did they eventually land in the world of audio drama instead of being a play or television show? 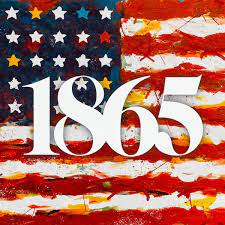 “This is a story of characters… something that needs to live and breathe and have voice and life to it. So I knew it wasn’t supposed to be a novel. I started to notice that there were podcasts like Homecoming and Dirty John that started as an audio drama before becoming a vehicle for television. And so I felt like the podcast medium was a great place for a story like this.

“An audio drama is a lot more manageable from a budget perspective, too. If we write a big, epic, sweeping battlefield scene, it’s not like it will be cost-prohibitive as an audio drama. So, it really felt like something that was as big, epic, and sweeping as 1865 was perfect for the podcast medium. There are also no limitations around location or size of cast. It was a really good vehicle for what I was trying to do as a proof of concept for TV. My intention is still to make 1865 into a television series, though.”

With Walker’s start as a storyteller through theater, this ultimate vision makes perfect sense.

“I studied acting and playwriting. I also had a minor in communications, radio, TV, and film, but I’ve always been a storyteller. I’ve written stories since I was a little kid. I used to lock myself in my room and write and write and write until my fingers were bleeding. And I still do that today, although my fingers don’t bleed now. Maybe that’s just because they’re a little bit older and more calloused.

“I’ve been drawn to narrative, because I think at their heart, there is change. That’s what we love about stories—we love to see change in action, because change is so difficult to come by in our own lives. It’s very satisfying to see a story of narrative change play out for us, whether it’s in a TV show, film, novel, or a podcast. I’ve always been drawn to stories and exploring what causes people to change.”

What’s next for 1865 is more seasons, starting with Season 2, which will extend the story from Edwin Stanton’s chapter to the second chapter of the story—the rise of general Ulysses S. Grant and the war that he wages against the KKK after winning the election of 1868.

UTR: Stories From the In Between