“The following documents and the recordings are a compilation detailing the events of the repair team sent out to Outpost Fristed in Svalbard. In the winter months, storms in Svalbard can reach windspeeds of 130 kilometers per hour, accompanied by or following snowfall. During these storms, travel is not advised.”

It’s pretty scary when you realize that not only are monsters real, but there’s one stalking you.

But, you know what’s even scarier?

Not being able to leave.

That’s what The White Vault explores. What do you do when you realize you’re not alone—that there’s something else with you—something… terrible, and you’re trapped with it in the frigid cold on an island close to the North Pole?

The White Vault is a slow burn academic horror podcast created from “found footage,” which makes it sound like a documentary.

“In the first season, we are introduced to a repair team that is sent to Outpost Fristed in Svalbard, Norway, to determine the source of a strange signal. And from there, we begin to unravel a much larger international, horrific mystery,” said Kaitlin Statz, writer and co-creator of the show. She and her husband, Travis Vengroff, who is the sound designer and producer, are the founders of Fool and Scholar Productions, and together, they create fiction podcasts.

While both Statz and Vengroff are American by birth, Statz also lived in Sweden and England. She brought Vengroff to England while getting her master’s degree, and a few months later, they took a trip to Iceland, which became the inspiration for The White Vault.

“I was able to start pulling together ideas from people I had met during graduate school, and was then inspired to set it against this cold, barren, but beautiful arctic scene. In the span of just a couple weeks after arriving home, I had outlined an entire story, brought it to Travis, and said, ‘This is what we’re making next.’ There was no discussion. It was just this is what we’re making next,” said Statz. 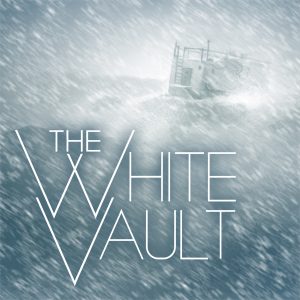 It took a lot of work to get The White Vault off the ground. “At that time, the only thing we had created was Liberty, which was a really small show. There was not a lot of trust in us as creators then. So, we were calling on friends to help, and asking people to record in their closets… basically, we did everything we could to make the first season happen. And it was so wonderfully received. It was also the start of the path that led to our entire careers as podcasters,” said Statz.

The fact that many of the characters not only have accents but speak a language other than English made production even more tricky.

“So we’re not only calling on our friends to help, but we’re now also reaching out into the audio drama community and to our network of fans to find out if any of them natively speak Icelandic or Finnish. We were very nervous to take this leap of faith at first, but going the extra mile to find authentic actors has become one of the greatest strengths of our shows.

“We 100% wanted to not only showcase these languages, but people from all over the world who are working toward a common goal. And a lot of the time, before the horror sets in, that goal is based in science. Seasons three and four are archaeological. So it’s wonderful to get to showcase people in these parts of the world. There’s a lot of Russians in Svalbard, Norway. There are a lot of scientific teams in Svalbard, because there are many weather stations and research posts there.”

The White Vault’s strong scientific foundation is in large part due to Statz’s background.

“We for certain did not get into podcasting believing it was going to be our future. At the time, I was in graduate school. I thought my future was in archaeological sciences. Travis had his own job. And we were just creating stories because we wanted to tell stories.

“I had always created stories and visual art in the past, and I love to play games like D&D where you get to create the stories around you and interact with others. But I can certainly say that I was so limited in my time, as I worked to get my degrees. So I didn’t allow myself to have those kind of ‘frivolous’ pursuits until Travis was like, ‘Maybe we should try.’ And I’ve grown a lot as a writer since writing that first script, which was the first I’d written that wasn’t for an academic purpose.”

Vengroff added: “We really wanted to find a way that we could hang out more as a couple and as friends, too. Podcasting was a creative niche for us that we could enjoy together. And scripted podcasting was very fun. We initially found that Kaitlin was a much better writer than me, and my sound design is a little bit better. So we quickly found a fun balance. She writes the stories, and I put all the pieces together.”

The White Vault has one more season in its original five-story arc, and then… we’ll all just have to wait and hear what comes next.