Funk music artist Cliff Beach is the executive producer and host of the podcast Deeper Grooves: Musicians on Music. He has been performing live for more than 18 years in Los Angeles and is the ideal person to go beyond the surface to reveal a profound understanding of music.

The name of the podcast is a nod to the analog (or vinyl) era, and Cliff enjoys going deep into his guests’ process of writing songs, doing live shows, and/or producing music or other content behind the scenes.

Deeper Grooves also reflects the many layers within every human being.

“Much of the time, we’re very superficial. We don’t want to scratch the surface, and I think that’s a disservice to the new generation. In the Motown generation, people were used to taking deep dives. As I tell my students and the people I mentor, ‘You need to find out not only about the people you like today, but also about their influences.’ Michael Jackson and Prince were influenced by James Brown. James Brown was influenced by Jackie Wilson and Little Richard. There’s nothing new under the sun, but it may be new to you, if you haven’t heard it.”

A DC native and Berklee-trained singer/songwriter/keyboardist, Cliff has created a style of music he has coined “Nu-funk”—a hybrid of soul, traditional R&B, funk, and neo-soul, and he performs regularly throughout Southern California.

Cliff has much to be proud of. His highly anticipated independent EP, “Who the Funk Is Cliff Beach?” was nominated for three L.A. Music Awards, including Record of the Year and a Hollywood Music in Media Award. He has also been featured in a live review in Music Connection Magazine and as a performer at TEDx Napa Valley in 2014. His last album, The Gospel According to Cliff Beach, was nominated for an Independent Music Award (Funk/Fusion Jam Album) and won two Global Music Awards.

After the pandemic hit and music events weren’t being held, Cliff wanted to expand his brand, so he decided to start a podcast.

“Over the course of more than 20 years as a musician, I have seen a lot of people who have done really cool things, but they’re not household names. I believe that everybody has a story, but not everybody has an outlet to share it. I thought that a podcast would be a great medium to tap into for that.

“It allowed me to do a deep dive into the stories of Grammy winners and nominees… people who really work on their craft.”

Cliff has a very clear vision for the podcast.

“I wanted to create a situation like Inside the Actors Studio, but for music instead—asking deep questions about musicians and their craft, so people could get a full 360 view of what it means to be a musician at this time.

“The age range of my audience is over 30 or 35 up to 55. Because the show offers deeper content, it’s not a flash in the pan. This podcast is really for people who are used to delayed gratification… people who have built patience and perseverance and want to understand more about long-staying artists. 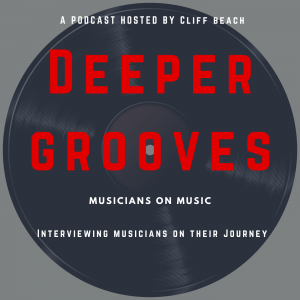 “40 years later, people are still listening to Motown; that’s what I want. You can be a one-hit wonder and sell a million records today, and have a bunch of 808 beats that sound very ‘today,’ but 40 years from now, am I gonna want to hear that when I’m in the old folks’ home? Probably not. I want to talk to people who are saying, ‘I may be a slow boil, but I can cook for a long period of time.’ We need more crock pots than microwaves.”

“I think podcasters and broadcasters have to be open to opportunities and to what’s happening. If you’re open, you’re able to receive and give, whether you’re going into a podcast, an interview, or a songwriting session.”

“Being a starving artist never appealed to me. A more practical approach for me is to try different things from a diversification perspective. That way, I can self-fund all my own projects. I am not beholden to anybody with the creative art that I decide to make, even if it takes me longer to do it.

“I think many people are able to work and do one or two things on the side that they love. That’s why I have my upcoming book, Side Hustle & Flow.

“I get to combine my skills. I’ve used digital marketing to get my music out there, promote events, gain followers, and so on. I think it all goes hand in hand—digital and marketing and creative.

“My purpose in life is to be as creative as humanly possible and to be able to use that creativity to make the world a better place. It’s to entertain people.

“I suspect that when people are making daily decisions, not everybody considers, ‘Is this moving me toward my goals and purpose, or away from that? Do I have a purpose?’ I think the earlier in life you figure this out, the better, even if it changes over time.”

Cliff believes that “standing still is always stagnation,” and he’s not slowing down. He recently won a World Songwriting Award for Best Funk Song and is a member of the current house band on Josh Gates’ Tonight show on the Discovery Channel.

Cliff has poured his passion and purpose into the Deeper Grooves podcast. As a result, listeners come away with a deep appreciation for the process musicians and engineers use to create long-lasting musical gems.

UTR: In Defense of Plants