After leaving a successful career running a film and music video production company, August accepted a friend’s offer to be COO of Kite Lightning—a leading-edge virtual and augmented reality company. Joining them “just blew open the lid for me on what’s happening at this unique moment in history. Never before have we had so much happening so fast.”

As Kite Lightning began to attract attention, some of the brightest and most innovative minds in technology, film, human performance, and more sought the team out to see what was developing. Each conversation with these leaders increased August’s curiosity and ignited his need to learn more. He began searching beyond the conversations, digging into and beyond virtual and augmented reality.

Recognizing that technology as we know it has radically shaped humanity and society, and that the merger of technology with human performance has taken our planet to places never envisioned 50 years ago (besides inside our favorite science fiction novels), Mind & Machine was born in 2017.

When asked if the show has changed his mind and/or abilities as a human being, August said, “Learning is life, and with the show, I’ve learned to look at causality and patterns. If you want to change something, you have to break that cycle. It’s an extrapolation of what I’ve been doing all my life. By nature, I’m just a curious person. But the show is given a shape, and it’s given me discipline to delve into these topics.” 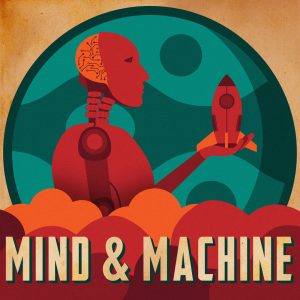 Discussing a combination of interests across all different aspects of August’s journey through life, there are few topics off limits on Mind & Machine. It doesn’t matter whether society thinks of something as good or bad; August believes that is irrelevant. What matters is the conversation. Getting fired-up about the topic is critical for August because of the amount of time he pours into research prior to the guest ever appearing on air. If August sees something substantive in a topic, he ventures down the corresponding rabbit hole exploring the nuances.

Gene editing, for example, is a topic he is passionate about. “The Pandora’s box has been opened, so we need to explore it. The more deliberately we examine it, the better choices we will make as a society,” he said.

That “exploring deliberately” philosophy is the underlying theme of the entire show. Listening to the audio podcast, or watching the episodes on YouTube, listeners are encouraged to formulate their own opinions about topics ranging from CRISPR, AI, clean meat, space, and future cities. There’s even a highly addictive episode with Donald Hoffman around the case for reality.

Episodes are not dumbed down for the listener, either. Rather, his questions spur deeper conversations that inspire listeners to think for themselves and take action on what they learn.

August thinks of the show “very visually,” and uses his background in photography and video visual production to provide more than an audio-only podcast. He edits each episode on the fly using live streaming software. Geeking out on the video elements of the YouTube portion of the podcast lets August merge the two halves of his brain—the analytical left brain in researching and interviewing and the creative right brain in the production of each show.

Asking questions that are both creative and insightful, August has been described as a “thought leader,” “futurist,” and “theorist.” A better word, though, might be “results leader,” as he cares deeply about creating conversations around topics that feed his need to look at all sides of technology and drive results to make our world a better place.

When I asked him what legacy he hopes to leave behind, he responded humbly. “I would hope I encouraged people to take a broader look at the impact of our individual decisions. The aggregate consequences of our choices can look quite different than they appear at the personal level. While all decisions are made at the individual level, harmful results can build across society without us even noticing—until it’s too late.”

If you take nothing else from the show, catch August’s excitement and enthusiasm for the possibilities of our future. Wanting the world to be a better place, his message to society and the technologists who develop so much that impacts our bodies and minds is powerful: dig deep, and seek the connections between your isolated world and the larger impact your actions will make on our lives and planet.