Joining Clubpod, Podcast Magazine®’s club on Clubhouse, opened the doors for Glenn Barton, also known as “Broadway the Giant,” to cross my path. Broadway was in a Clubhouse room that I was hosting, and as soon as he started to share his story, I liked him immediately. As you get to learn more about him in this article, I’m confident you will love him, too.

Broadway was born in the Bronx and raised in Harlem, New York, in a single-parent home. His mother made it very clear to him that his potential was limitless; she helped him write his first rhyme at nine years old. Broadway’s life took an unexpected turn when she passed away when he was just 14. As a coping mechanism, he began writing more to articulate his feelings about the loss of his mother, which became the foundation of his expressive nature.

Broadway says his pain has influenced his music, too:

“My experiences and resulting life lessons have helped shape my understanding of life, my relationships with people, and what they ‘want’ versus the energy they actually ‘give’ to obtaining their desires. If it’s not my absolute best, whether in my music, podcast, or anything else with my name attached to it, I won’t release it,” he shared.

During the release of Broadway’s solo music effort, The Air’s Thin Now; Lucid Dreamz 2, he sparked an idea that would become instrumental in his success as well as the foundation to inspire and develop his following.

That idea was named the Live On Broadway Podcast.

The inspiration behind the idea? Relationships, happiness, and connection are the cornerstones of our lives. To foster those cornerstones, Broadway factors in Instagram and a live studio audience to his show. With a strong team behind him and the help of his business partner and friend “PR,” the #LiveOnBroadwayPodcast is quickly becoming a discussion topic in every relationship six degrees of separation.

“My podcast is a scratching of the surface of who I am,” Broadway added. “It’s about finding myself while having genuine fun and making others laugh. I aim to add value to my listeners’ lives by creating a joyous, feel-good experience through podcasting.”

Broadway loves to “mix things up,” too, in his segment-based show. He usually begins with the easy stuff: relationships in the land of social media, what’s happening “in the now” with celebrity relationships, etc.

Then, he begins asking random questions of his live audience. 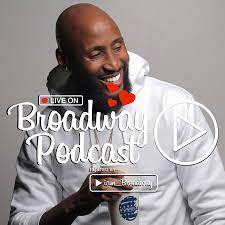 Listeners can expect a question or comment intentionally meant to ‘stir the pot,’ if you will.

“I’m not going to lie to you… I throw a monkey wrench in there, for sure,” Broadway admitted. “I’ll present a question in a way that I know everybody’s going to think, ‘Yeah, I agree.’ And then I’ll come from left field and say something like, ‘Well, frankly speaking, that’s some bullsh*t. And then I’ll just go off into a whole different direction. That always excites the room.”

Broadway also encourages his audience—who he refers to as “giants,” because, he says, “We get to stand on their shoulders as they share their stories and see things we’ve never seen before”—to share their thoughts freely. He makes it clear that he does not label or judge, but rather appreciates different perspectives.

“We encourage honest conversations, and all perspectives will be respected. That said, as a participant, you are gonna laugh. And we’re gonna laugh with you, and maybe sometimes at you. Sometimes, the members of the audience give it back to me, and I gotta have tough skin, because when they do, they give it to me hard. Especially the ladies—they don’t pull any punches, and I respect that. “

Broadway’s intention is to take his audience and listeners on a ride:

“My favorite part is when we actually have people in a relationship listening or attending together. That’s when things can get a little crazy.

“Once, I was talking with a guest, and his wife was in the audience talking a lot of mess, because she did not like what he was saying. She ended up throwing something from her purse that went whizzing by his head! And I know he had a long night that evening, you know?”

Despite being a host who does a lot of talking, Broadway is also a keen observer.

“I like to people watch. I listen. Before the shutdown, I would go to Starbucks and just watch people. I love that. And I think it has helped me figure out how to have the deep, honest conversations I crave. I don’t want to pull any punches. I value direct and real communication.

“Over time, I discovered that I wanted to be heard, too. But I didn’t have a voice. Now, I use my music and my podcast to offer a platform that affords that same opportunity to listeners and viewers alike.”

The future is bright for the Live on Broadway Podcast—in fact, it was just green lit for television in March of 2020.
“We recorded the pilot episode this past September, after COVID subsided some. We just don’t know what’s going to happen, since COVID is so up and down. We’re still trying to figure that out. But the crew at MNN, Manhattan Now Network, loved the pilot episode!”

The Live on Broadway Podcast—real, raw, and uncensored—is about to celebrate its 100th show on March 1—an important milestone for all podcasters.

“If you give us a chance… just one chance,” Broadway said, “I’m sure you’ll come back for more. It’s always good fun, and a chance to listen, live, and grow.”

Strap in and hold on tight—you’re in for a very fun ride! Broadway the Giant most certainly lives up to his moniker, not because of height or stature, but in heart, as he continuously honors his commitment to positively impact people’s lives.

UTR: My Year in Mensa