One year ago, when the world wasn’t as broken, many of us made the trip to our local theater to watch a loosely based ‘biopic’ of the relationship between Mr. Rogers and Lloyd Vogel. This fictionalized look into the real-world story about how Fred Rogers impacted the life of journalist Tom Junod took us behind the ‘neighborhood’ of our childhood and into the fuller life representation of the man on local PBS nationwide who taught us how to care.

Mr. Rogers’ Neighborhood was one of the defining TV shows of any child growing up between 1968 and 2001. Those same stories live on today through the PBS animated spinoff ‘Daniel Tiger’s Neighborhood and continue to impact children around the world.

While Mr. Rogers left the airwaves in 2001, his message and example seem even more relevant today.

Recently, I stumbled upon a podcast called Finding Fred. Hosted by Carvell Wallace and presented by iHeartRadio and Fatherly, it explores the complex message—and the man who created the core ‘DNA’—of the show. This 10-part series is less of an exploration of the man and more of an unwrapping of the thinking behind the show that has in some ways become radical, spiritual, and revolutionary in today’s world.

Because of COVID-19, politics, and social dissidence in our culture today, it seems the loudest voice is the only one that matters. Yet Mr. Rogers is the complete opposite of the bombastic rhetoric that overarches modern conversation. The quietness and meekness of the man that may seem out of touch and lacking relevance today might be the very thing we need more of now.

Finding Fred asks a simple question: Does Mr. Rogers matter today? While it’s easy to imagine how it could quickly become a nostalgic ‘fluff show’ that endeavors to make us all feel comfortable, host Carvell Wallace doesn’t cheapen it by taking that feel-good easy out. Instead, the show investigates and discovers the unique depth that Rogers brings through the exploration of race, community, faith, love, loss, death, make-believe, violence, oppression, genocide, and war. These topics are relevant no matter the decade, but seem significantly more important in our current times. Each episode weaves interviews, clips, and discussion of the topics Mr. Rogers boldly explored when other children’s shows ignored them. 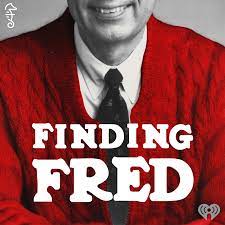 To explore the complexity that was Mr. Rogers, you need a host who can dive deep into the research while being able to craft a captivating story shared through the audio medium. It seems easy; however, many shows fall apart either by shallow preparation that fictionalizes the conversation or by the host’s inability to explain solid research. Carvell does a masterful straddling of both to craft the perfect balance.

We would expect nothing less from a New York Times bestselling author who has contributed to Slate, Esquire, GQ, New Yorker, Pitchfork, ESPN The Magazine, The Guardian, and MTV News. Throughout the podcast, Carvell exhibits an impressive depth of knowledge and understanding as he interviews psychologists, spiritual leaders, and people who worked and lived alongside Fred Rogers.

Reminding Us of Our Humanity

As I listened to each episode of the podcast, one thought kept emerging in my mind:

We need a restoration—a reset—of our humanity in this post-election world as we still grapple with the fallout from Covid-19. We need to find the humanity that was defined by each message that Fred Rogers provided us when he entered our house via television.

Do Fred Rogers and his show still matter today? I believe Finding Fred answers that question with an unmistakable “yes.” But it also leaves us with some new questions…

What will you do to find empathy again? How will you respond to Fred’s timeless messages in your own life?

Fred once said, “When I was a boy, and I would see scary things in the news, my mother would say to me, ‘Look for the helpers. You will always find people who are helping.’’’
Maybe the best question we can ask today is, will you be the helper the world needs today? Will you choose to live a life that sings, ‘I like you just the way you are?’