“If you like looking on the bright side of life, f*ck off.”

This sentence, one of the first in the podcast description of The Downside, pretty much tells listeners all they need to know.

After all, who says that you “have” to make lemonade when life serves you lemons? Not Gianmarco Soresi, that’s for sure. In fact, he’d probably be more than happy to discuss why lemons suck, and why you should enjoy complaining about citrus fruit in general!

In a world where so many podcasts in the Comedy Category just aren’t that funny, or at least as funny as the hosts think they are, The Downside offers a plethora of laughs. In a recent interview with Podcast Magazine®, Gianmarco explained the ‘secret sauce’ to making his show work when so many others don’t.

“When I was planning to do a podcast, it took me over a year to really figure it out,” he said. During that discovery period, he asked himself an important question:

“I wanted to create a space where you can complain, and no one says, ‘You know, it’s not that bad.’ I hate that,” Gianmarco emphasized.

The type of comedy he discusses in positive terms is for those who just can’t stand those kinds of arbitrary phrases— “Everything will work out,” or “Things will be okay,” or perhaps the number one irritant… “Things happen for a reason.”

It’s the Larry David and Jerry Seinfeld type, and without question, it attracts a big crowd.

The popularity of The Downside may speak to the cathartic side of complaining—the release that comes with pointing out when something is so obviously not right.

“I think that brings out a unique kind of humor,” Gianmarco shared. “Complaining doesn’t mean you hate something. Complaining is a way of interacting with the world. It’s being honest about the way you feel moment to moment. You express your frustration in a way that makes it more bearable. 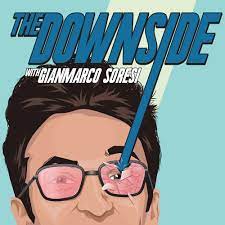 “There’s this idea that if you talk about the sh*tty thing that’s bothering you, you’re going to bring everyone down, but I think it’s the opposite,” he pontificated. “I think it’s the people who don’t want to talk about the crumbling infrastructure that we live in every day, or the capitalist systems that put us in a horrible position, who are living in an illusion. Everyone is craving some kind of expression that they may not be able to articulate themselves because they ‘have to be positive,’ whether for their co-workers, family, or on social media. I say we table the idea of looking for the silver lining. It’s about being honest about what we’re all dealing with and laughing at it. You just have to be able to find the humor, rather than trying to hide things or brush things under the rug. We should all be talking about some of these things more.”

One of the aspects of The Downside that produces the laughs is the banter between Gianmarco and his buddy Russell. Add a multitude of genuinely humorous guests to the mix, and you have a formula that works.

“I think what makes it funny is when people come on, and I try to set the tone by complaining right out of the gate. So they go, ‘Okay, well there’s no way I’m going to look like more of an *sshole than this guy!’ Then, they feel free to express themselves in an honest, funny way, without sugarcoating stuff or pretending things are nicer than they are.”

This led to a discussion on how the guests are chosen for the podcast. Are they handpicked, knowing that Gianmarco’s brand of comedy will align well with their sense of humor? Or have Gianmarco and Russell just been fortunate in landing great guests who turn out to be perfect fits?

“I have gotten really lucky, but that’s partially because I know a lot of stand-up comedians,” he said. “This is my world. I know who’s fun to talk to. Comedians understand the premise of joking. So, I am free to make some dark jokes, because they recognize that we’re in a safe space.”

However, not all of Gianmarco’s guests are comedians, and that can create a little more work on his part. “When the guests are not comedians, there’s risk,” he revealed. “But that’s also when I feel like it’s my job to bring them into my world.”

As the podcast evolves, Gianmarco hopes his role as interviewer follows suit. “Sometimes, I feel like I can’t get guests to show who they really are. They’re still putting forward a certain kind of persona. There are times I need to pierce through that veneer. This usually occurs when guests do a lot of social media or branded content, or they’re models or influencers. They’re always smiling!

“I never thought of myself as an interviewer. Sometimes, I even struggle socially, but I like to make people feel like they’re in a safe place. And I do want to be braver… explore and reach outside the comedy world to talk with different people. I think I can poke a little more, and let people feel that I’m just having fun with them. I’m not going to judge them.

“This is also why I have a co-host,” Gianmarco continued. “I was very nervous in the beginning, because again, if you bring me to a party, I’m not Mr. Social. I had this deep-rooted fear that I’d be sitting across from guests, and after a minute or two, we’d just stare at each other and call the episode right there… ‘Well that was a good two-minute episode!’ That’s why I like Russell co-hosting. We’ve known each other for seven years. So if the guests don’t talk, we bicker with each other, which generally makes the guest feel like they’re with friends. That’s part of the solution.”

However you want to describe the formula, Gianmarco’s brand of podcasting works. “I want people who listen to my podcast to enjoy hearing people complain and express frustration,” he laughed. “We end the show with ‘Go Count Your Blessing’—intentionally singular, to at least let people know that we’re not total psychopaths. We can acknowledge that we haven’t seen a rainbow in a while because of global warming.”

It’s clear that Gianmarco is a true comedian hosting a podcast, rather than a podcaster trying to do comedy. He talked about using The Downside as a way of trying out ideas, too… a comedian’s notepad, in a sense.

“I see the podcast as an extension of my stand-up, which is very pessimistic. That’s why I picked the name ‘The Downside.’ I poke fun at everything that is full of sh*t, including myself.

“I’ve had stand-up become conversation, and conversations that have become stand-up bits. I feel like podcasting is another creative outlet of many. It feels very essential to my artistic process now.”

Both the art of comedy and the art of complaining are on display for all to enjoy on The Downside. Give it a listen next time you need a laugh or have the urge to gripe… or both!