In my recent features, I’ve covered the fusing of Politics and True Crime and Business and True Crime in podcasts, so why not Sports and True Crime? As it turns out, when you mix the two with humor, you get a triple combo better than pizza, garlic knots, and beer while watching the World Series!

That’s the beauty of Crime in Sports—a podcast started in early 2016.

Comedians James Pietragallo and Jimmie Whisman turn two guys cracking jokes about athletes who screw up their lives in the strangest ways into the best laugh-fest escape you could ever want. Having worked their way into the ears and hearts of listeners around the world, they’ve also landed on Podcast Magazine’s Hot 50 Chart for a number of months now.

“That’s our baby! Crime in Sports is what started this,” exclaimed Jimmie, referring to their true-crime-comedy-podcast empire which also includes Small Town Murder. “We’re really proud of it, because it’s what got us into podcasting.”

With two successful podcasts under their belt, I asked if they feel if they are comedians who produce podcasts, or podcasters who happen to be comedians. “We are always comics first,” answered James. “That’s where everything comes from. That’s our base.”

“Comedy is so difficult without a credit,” added Jimmie. “You’re pretty much pigeonholed into whatever geographical area you’re in to get an audience. With podcasting, you have the world.” (By “credit,” Jimmie referred to the need to have a TV or movie credit in order to be a headliner.)

“We went from opening for other comics at local clubs to selling out theatres all over the country on our own,” James pointed out. “Podcasting allowed us to do that. Otherwise, it would have taken us 15 years to do it, if we were even able to at all.”

As we continued to discuss their successful strategy of using podcasting to propel their career, we delved into the reasoning behind a true-crime-based show rather than one specific to the comedy genre. “The market [Comedy Category] was flooded, and continues to be flooded, with the ‘comedian-interviewing-comedian’ show,” James said. “We can’t compete with a hugely famous comic who does that.”

Instead, they decided to choose a topic and make it extremely humorous. “I wanted a show about criminal athletes. That’s interesting to me,” James continued. “And I wanted it to be funny. That’s what I wanted to hear, and it didn’t exist.”

Now with over 200 (and counting) of published Crime in Sports episodes, it certainly exists today. 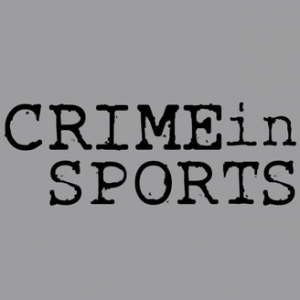 There would be more installments if they covered their stories in parts, as their episodes tend to run a bit long. Case in point, each of the June episodes went well over two hours. “More people listen when they have the whole story,” commented Jimmie. “It’s a credit to James and his commitment to finding everything there is to know about a story. This way, you get a whole picture of who somebody is and what somebody did in one episode.”

“If we’re going to break somebody’s balls, we better have all the information,” James chimed in. “I never want to be called ‘lazy’ with the show. Plus, our most-listened-to episodes are our longest ones. I’m not sure why that is, but I’m happy our listeners [enjoy them].”

After a few more laughs among the three of us, I asked each what they thought were the strangest stories they’ve covered so far. “Mitch ‘Blood’ Green,” James yelled without hesitation, referring to episode #156, which aired on April 8, 2019. “He started a street fight with Mike Tyson, which is the craziest thing anyone has ever done in any of our stories. This was in ’86 when he was heavyweight champ of the world!”

“He challenged him while Mike Tyson was obliterating men with rules in place in the ring,” Jimmied chimed in. “I also enjoyed the story of the boxer who had a wife and children, but left the country and created a life with another woman, and ended up shooting her.” This refers to episode #207—”A Mushy-Minded Murder—the Audaciousness of Del Fontaine,” which aired on May 4, 2020. Apparently, long episodes and crazed boxers are popular on Crime in Sports!

Given the joy both James and Jimmie have for live events, I wondered what’s next for this duo, as they face the challenges that come with performing in a world with COVID-19. “We have a full tour that’s been rescheduled for the third time this year,” James laughed. “We’re just waiting for everything to clear up, so we can get back on the road. We can’t wait. We’re comics. We love doing live shows.”

“I just want this world to go back to ‘normal,’ so we can get back to touring and meeting the people who support us,” Jimmie added. “I miss ‘em!”

While they are waiting, James and Jimmie are working on a new podcast to add to their media company. “Vile Human Beings is coming out soon,” explained James. “Basically, we take two terrible people from history, debate who was worse, and award a winner at the end. Who’s worse… Dahmer or Bundy? Who’s worse… Stalin or Pol Pot? Let’s talk about it! But let’s get into the little things, too, like who would be most likely to leave the toilet seat up.”

Fortunately, until touring begins again, we can hear from this duo on a weekly basis. “Had we not done [these podcasts], comedy wouldn’t exist for guys like us right now,” Jimmie pontificated. “We’re very lucky that we are retaining our audience. People are sticking with us in the podcast world. When we do go out on the road, they will still be there. Had we not done this, we would be screwed.”

“We would have had to start over after months off without the shows,” added James. “We are very lucky. The podcasts are the best things we have ever done. They have really given us a career that’s viable, and we are so thankful for our audience.”

Personally, as a member of their audience, I can honestly say we are thankful to have Crime in Sports. While we may not have too many athletes performing just yet, we can have a hearty laugh about some of their stories, thanks to James and Jimmie.

Under The Radar: Real Crime Profile