Rob Actis has a big voice, and he is not afraid to use it.

You may have heard him narrate Hal Elrod’s The Miracle Morning audiobook, or in numerous national commercials. As a reader of this magazine, you probably know him as the voice of Podcast Magazine®’s Hot 50 Countdown. And if you recognize his name as our comedy category director, you’ve likely read his articles, too.

Wondering why I’m writing about him, in the Technology space?

When Apple removed the podcast subcategory, shows about podcasting were left scrambling to decide where they actually belong. Thus, the Hot 50 Countdown and other podcast-related shows chose to land in the Technology space. Normally, I wouldn’t consider writing a feature on a show not traditionally tech, but I’ve come to learn how much tech really goes into creating the countdown, and I don’t want you to miss out on some great shows because you aren’t sure how they relate to the Technology category.

Plus, I fell in love with Rob’s story… so here we are.

Rob is a bestselling author, entrepreneur, and a national voice artist who owns a successful design and marketing firm. In addition to the Hot 50 Countdown, he also hosts the Living the Law of Action Show. Soon, he’ll launch two more podcasts. As if that weren’t enough to keep him busy, he also recently purchased and is now hosting Life Transformation Radio, and he is a force to be reckoned with on Clubhouse.

His goal: to help others share their voice and live a life of inspired action.

After suffering through a life-threatening blood clot he had initially ignored, he realized he needed to reevaluate his life and how he spent his time. Learning self-care became a priority, as did living his mission to inspire others to live every day like they want to be alive.

Largely confined to bed for an extended period to recuperate from the clot and near-death experience, Rob learned to meditate, which led to his decision to live with intention in all he does. That not only meant letting go of any jobs he took for the sake of work, but also any actions that didn’t serve his life, family, or health.

He decided to choose joy over sadness—to laugh instead of cry—a choice he learned early on in life that we all get to make.

He added the “choosing laughter” part after the experience with the clot, because “Laughter raises the tide, and when the tide is raised, everyone’s ship rises,” he said.

Rob grew up listening to Casey Kasem deliver America’s Top 40, which launched his dream to be on radio, too. He has never looked back.

With the Hot 50 Countdown, Rob pays homage to a genre perfected by Kasem, and it’s the first of its kind for podcasts. He of course puts his own unique twist on spotlighting shows from all around the world. The unique difference? The podcasts aren’t ranked by anything other than listeners’ votes. You never know which show will make the list, and that is what makes it interesting for Rob.

And the list matters. In fact, making it can mean all the difference to a show that doesn’t already have the backing of a network or advertising. Rob loves that the “little guy” is represented right alongside the bigger shows that seem to hit all the traditional rankings-based charts.

Elevating podcasters and helping them move past their fears is another passion of Rob’s. He hosts regular ClubPod™ rooms on Clubhouse to help people move past their fears, claim their power, and take action in their life. This includes launching a podcast, if they want. He loves helping with the setup process, and his amazing studio in his office speaks to his expertise.

Podcasts are clearly in Rob’s blood (and on his PODCSTR license plate). 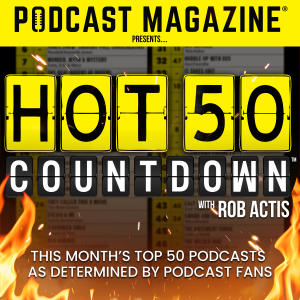 Rob admits he was not always good at moving past his own fears, though. Early in his career, his voice agent pushed him several times to seize opportunities for national voice work, when he chose to pass because he was afraid he wasn’t good enough. Now, Rob knows that when he hesitates to grab an opportunity, he needs to get quiet and listen. If fear is in the lead, he now simply tells it “No” and moves on… because he is good enough.

Rob is grateful for the reminders he receives from his wife Tanya and his agent to push through his own fears, which is just one of the catalysts for his love of helping others. He believes everyone should have someone in their corner, lifting them up and reminding them they can do anything they set their minds to, and that they are not alone.

Rob points to his family as a guiding force in all he does. With so many demands on his time between all his endeavors (the Hot 50 Countdown can take up to 10 hours of production to achieve its polished sound), he is careful to prioritize to ensure time with his family and for meditating.

Rob says every day is precious, because he is living “on borrowed time” after his near-death experience. This is something his daughter can relate to, and she recently appeared on Life Transformation Radio to talk about her own in an episode titled “ACTIS Strong – A Story of Survival with Aidan Actis.” Grab a box of tissues for that one—emotions run high for both as they share things with each other they had never about before.

Rob may be called “Mr. Action” for all he does for others, but perhaps there is an equally fitting word to describe him: devoted.

He is devoted to making the world a better place, to his fans, and to leaving every person he has interacted with a little bit happier.