The podcast world can be a small one. This was very clear as soon as I began speaking with Chris Menning in Bangkok, who I quickly discovered was originally from same area of England as myself. This international medium really connects us all!

Chris is the host of On The Back Bar, a podcast featuring interviews with industry leaders and experts in the world of bartending, cocktails, wine, and spirits.

‘Podcasts have been my favorite route to education,” Chris said. “I love listening to them. A lot of my background in hospitality over the last 10 years involves talking to amazing people all around the world. Whether they’re champagne producers or world leaders in the bar trade, every time I heard their stories, I thought, ‘Wow… this is incredible; more people need to hear this.’ When I started my show, I don’t think there was much going for podcasts in the drinks industry.”

What started as a passion project is now a key piece of Chris’s business ventures. I love the fact that his podcast is very niched, and figured that was strategic to avoid getting lost in the sea of podcasts out there. 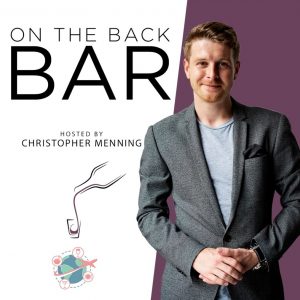 “100%,” Chris confirmed. “You definitely need to niche down, and bartending is a very niched and a tight network already. I have evolved to talk about more topics, but all within the bar industry.”

I was curious about his route into the industry.

“I kind of fell into food and drink. It all started with my working in a student bar, pulling pints. That grew into working in Michelin-starred restaurants and high-end hotels around the world.”

However, after a decade in the industry, Chris wanted to shift from the long hours he put in to the more social aspect. He wanted to do something more, but still remain in the community.

“At my last place of work, they had to close the restaurant for four months of refurbishment. Luckily, they gave us half pay. I did what I think most people would do—bought a one-way ticket to Asia!”

Chris realized Bangkok was where he wanted to be, and he has lived there for two years now. He runs a website called Gastronomer Lifestyle, and On The Back Bar is an offshoot of that. He also creates city guides recommending the best places in the world to eat and drink. He explained:

“I still wanted to be a voice and continue to connect with people in hospitality. It has been a way for the bar community here in Asia to connect with the Western world.”

I wondered about Chris’s biggest surprise and challenge in his relatively short podcasting journey.

“At first, I thought no one would listen! But it’s grown better than I anticipated. A lot of the people I contacted for interviews were so up for it and open. I think podcasting is a fantastic way to open doors. The greatest benefit for me has really been connecting with industry leaders I have looked up to throughout my career who I can now call ‘friends.’”

As far as challenges go, Chris says it’s sometimes difficult connecting with people in different time zones. Some of his interviews have been at 4:00 am! It was actually 11:00 pm for Chris when we spoke.

So, where does he see podcasting, and specifically, his podcast going in the near future?

“I do a weekly show right now, and I plan to start doing more non-interview-based shows. I just took over running a cocktail bar here, and I’m designing a whole new cocktail menu and beverage program. I’d love to document all of that… my process, how I do it, and what inspires me,” he shared.

Monetization comes via sponsorship from his Gastronomer Lifestyle website. He is also creating “The Blue Plate Awards” to celebrate the best places to eat and drink in Asia.

To wrap up our chat, I had to ask for a good cocktail recommendation for our readers.

“I’m really into flavor manipulations and infusions, which you can do a lot of at home. ‘Fat Washing,’ for example. Get some coconut oil, melt it, mix it with vodka or gin, and leave it in a container for about six hours. You then put it in the freezer, and the fat solidifies, but the alcohol doesn’t. So can you strain the alcohol off and keep all that coconut flavor. This is perfect for coconut martinis! You can do peanut butter and bourbon and olive oil and vodka, too. There are lots of different routes to take. Come to my bar and I’ll sort you one out,” he invited.

Cheers to that (as the world seems to be opening up again), and cheers to Chris’s already successful podcasting journey!

The world of cocktails has become one of the most exciting and innovative industries there is, and it’s time we learned more about it.