If 2020 has taught us anything, it is the value of community. And when we peel back another layer, we see that communities consist of individuals who stand out in their own way and bring something to the whole which becomes greater than the sum of its parts.

No group of people in the world knows this better than the Orthodox Jewish community. Tight-knit and traditional, the community is generally a shade behind others when it comes to podcasting.

But Nachi Gordon and Yakov Langer are doing their part to alter that with their podcast Meaningful People, by celebrating those in their faith who are changing the world for the better.

Both men grew up in New York as the youngest in their families. They attended the same high school, and although Langer was a few years ahead, they knew each other. They also both had a lot to live up to.

Gordon’s father owned a Jewish radio station before running a newspaper, so Gordon was no stranger to media content creation. But as a millennial, he looked to new media for a platform rather than traditional outlets. He started an Instagram account called Meaningful Minute to share one-minute clips of inspiration from rabbis and speakers.

Langer describes himself as something of a “goodie-goodie,” checking off the boxes he was “supposed” to check along his path. A lot of those boxes were the expectations his loving parents and tradition had set for him, and he did his best to live up to them, however burdensome it may have felt. Interestingly, he does not consider himself overly spiritual and often does not know of the people he and Gordon interview on their podcast. He says he is not impressed with celebrity, but noted that Barack Obama follows him on Twitter. 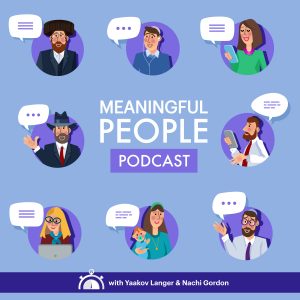 This is epitomized in the episode of Meaningful People in which their guest suddenly realized that he missed prayers to do the interview. Gordon and Langer respectfully gave him the space to pray right there on the show, and when he was finished, they picked up the interview.

Keeping their faith tradition is not always easy, though.

“You have to eat Kosher,” Langer says. “That limits 99% of all restaurants and a lot of food products.” However, he likens it to wearing a seatbelt in a car. “It gets annoying, but ultimately, it’s better for you.”

For a long time, Langer felt that “the heart and soul was missing” from the Jewish tradition for him.

It was not until he spent some time in Israel that his heart connected to it. In fact, his one-year visit stretched into six. “When I got there, I thought everyone here is doing something so different! What am I doing wrong? I’m doing everything I’m supposed to, but I’m still so unhappy,” he remembers.

He asked many questions about his faith and God. And in time, what once was a collection of expectations became a faith of his own.

It was just last year while Gordon was curating Meaningful Minute that he began to realize how much people wanted deeper conversations and longer content. He called Langer, and they began brainstorming the idea of starting a podcast. But where to even start?

The men noticed that Artscroll, a major Orthodox Jewish publisher, was publishing beautiful books about the lives of Jewish luminaries who had passed away. That caused them to wonder… what might it be like to celebrate those influencers before they die?

And the idea for Meaningful People was born.

Their goal is “to sit down with Judaism’s biggest names and personalities and have a conversation with them about their lives and how they achieved what they have,” says Gordon. He admits that he still gets nervous before every interview, but strongly believes that everyone has a story to tell—and that everyone should be heard.

“Everyone is meaningful,” Gordon says.

Using the new podcasting medium has also had an unintended side effect: these co-hosts and friends have found some notoriety in their community. As one of the few Orthodox Jewish podcasts, they often run into people who have heard the show.

“There is a lot of innovation happening now in terms of the Orthodox community with technology,” says Langer. “We’ve been a little slower with that,” he notes. The upside: being among the first has worked to Gordon and Langer’s advantage, having even led to paying gigs hosting events.

By highlighting people who are making the world a better place, Gordon and Langer are doing their part to make their mark on their community, and in time, to improve the world.