When it comes to spiritual leaders, it’s easy to assume they have it all together. Otherwise, they wouldn’t be leaders, right?

After all, you wouldn’t look to someone who is struggling like you for guidance, would you?

From the outside, Dominique Young looks like she has it all: a successful podcast and a growing ministry and family. But the best leaders lead from their own brokenness, seeking to serve others who suffer as they have. Young’s story is no different.

She grew up in Virginia, attending church around major holidays. When she was asked to lead a Gospel choir, she said “yes” because she enjoyed music. As a leader, she attended Bible studies and was intrigued. Then one day, she surprised everyone by committing her life to Jesus out of the blue. The group members simply assumed she was already on board with the faith.

But in fact, the reason was more personal:

“I thought that giving my life to Jesus and really running after him would in turn get rid of the mental health struggles I was dealing with. But it didn’t happen that way,” Young reflected.

Young suffered from anxiety her entire life, and it was lonely. “My emotion was overwhelming. My body would respond, usually by uncontrollably shaking, and sometimes tears,” she said. “The more you think about things during it, the worse it gets.”

So, she became really good at recognizing the early signs of an attack, so she could sequester herself away from others when one occurred, thereby keeping her secret.

“I felt like I was a disappointment to Jesus,” Young confessed, believing the anxiety meant her faith was weak. She also felt she had to be ‘perfect’ to be accepted in community or by God. As she struggled with it, she longed for God to free her from its grip.

So, she kept praying about her experiences, while still hiding them from everyone she knew—including her husband. The secrecy only made things worse.

Then, she had two children in quick succession and experienced postpartum psychosis. “They always talk about postpartum depression, but I didn’t know postpartum psychosis was even a thing,” Young explained. “You literally hear voices. I know that sounds crazy, because it felt crazy,” she said.

That’s when she drove herself to see her aunt, one of the few people who knew what was going on. Her aunt insisted that Young go to the hospital immediately. She could no longer hide.

It was at the hospital that Young’s husband learned what his wife was going through. “My husband is a super-supportive guy,” Young gushed. “He probably felt kind of sad and disappointed that I didn’t let him know.”

The hospital visit lasted three days, and Young says it changed her life. No longer would she pray for change without anyone knowing. Instead, she gave up her life of appearance-keeping, no matter what it took.

“I began to realize that part of this healing journey of wellness I was on required community,” she recalled. But the communities she was already in were not structured for genuine, deep relationships. Then, she had an idea.

Her social media could become a place to connect. “I wondered whether there were moms out there who were having a hard time getting out of the house,” she said. So, in April 2017, she started a Facebook group with 19 other moms. The connections multiplied as moms shared what they had found. 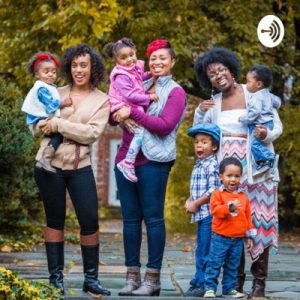 Now faced with the prospect of creating content to serve her new audience, Young started the Faith Mamas Podcast and launched an app. The audience soon grew to over 2,000 moms.

“It was a place where it’s okay to be Christian and honest,” Young said. The common thread the moms shared? The desire to stop pretending like they had it all together just because they believe.

“What I’ve noticed,” she mused, “is that a lot of people just don’t want to go through this alone.” Her message to them is not that God will fix everything. Rather, God will walk through the most difficult parts of life with them.

Young’s content invites women to read the Bible and pray simply. “A lot of moms are like, ‘Can we do that?’” she chuckled. “I didn’t know it was going to be that way, but a lot of women thought they needed a bunch of other tools to have a relationship with God.”

This year, the Faith Mama’s Podcast as big plans. They recently launched a new app for delivering all the resources Young is creating. She’s also taking the podcast live on Sunday evenings to give moms a chance to ask questions in real time.

Young learned that she does not have to be perfect to lead a group of growing—but great—moms. She merely needs to show up, be authentic, and start a conversation to lead her community. That’s great hope for moms everywhere.

UTR: The Rise and Fall of Mars Hill

UTR: Above the Basement - Boston Music and Conversation

UTR: The Rise and Fall of Mars Hill