Nothing can quite prepare you for fatherhood. And yet, the expectation on men to master the role—both from others and themselves—is astounding. The reality is, it can be difficult to know what to do even in good times.

“Parenting is a marathon, not a sprint,” reflects Jay Holland, a pastor and the podcaster behind Let’s Parent on Purpose. “You cannot sprint your way through parenting.”

But what about when difficult times hit? How do you parent well, then? It’s a question many dads and moms are asking as we continue into the second year of a global pandemic. And when we are faced with loss or tragedy, the question becomes even more profound.

Holland has a unique take on parenting through grief, because he has done it. The experience, while excruciating, shaped him into the resource and pastor he is today.

Holland grew up in West Virginia and married his high school sweetheart. While serving in a church and preparing to become missionaries in India, his wife began to suffer from an autoimmune disease. After an intense period of hospitalization, she was released to spend time recovering at home.

That night, she collapsed in the bathroom. Holland administered CPR, but she was soon gone.

He was then responsible for the excruciating task of telling his daughter that mommy was not coming home. “In my late 20s, I found myself as the dad of a three-year-old daughter who was also a single parent recovering from what I hope is the most traumatic event of my life,” he remembers.

Navigating grief—his own, his daughter’s, and the family around him—became all-consuming.

It was in this season of his life that Holland recalled a conversation he’d had with a friend and counselor, who likened grief to a monster.

“The grief monster will come and knock at your door always at an inopportune time,” Holland recalls.

People handle the grief monster in different ways. Some try to ignore it, only for the monster to grow louder and more vicious. But, “If you open the door, let the grief monster in, and sit on your couch with it awhile, eventually, it will leave,” Holland explains. Facing the monster of course takes tremendous courage, but according to Holland, it’s the only way to keep grief from controlling you. 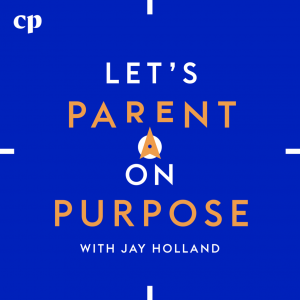 Holland turned to the Psalms for comfort. He also learned to let others help. “When you’re grieving, it’s not the time to insist on self-sufficiency,” he learned. “If people try to help you, you need to let them, and stop trying to pay them back. Let helping you be its own reward,” he advised.

As he cared for his own soul, Holland also took care of his daughter. “I was present,” he remembered, giving her permission to feel the grief. “I let her see me cry and never corrected her for crying.”

He created space for her to be sad and remember happy memories. They often listened to a CD of her mom singing in church. “When we could be happy, we were happy. And when we could be sad, we were sad.” he says. “We tried not to manufacture emotions.”

His years being a single dad gave him compassion for anyone trying to navigate the world alone. “There are very few things that are as chronically difficult as single parenting,” he reflects. “When you’re single parenting, you have so much load on you that it would be very easy to give into some unwise temptations.”

Holland is grateful for his community, which helped him through it.

In time, Holland found love and married again. He also found a job serving as the Family and Student Pastor at Covenant Fellowship Baptist church.

He quickly realized that the pastoral role only goes so far. Parents spend way more time with their children than a pastor or program ever could. So, he began his podcast to support parents as they raise children, viewing himself as a fellow traveler rather than expert.

What is his best piece of advice for parents?

“We vastly overestimate what can be done in the short-term and vastly underestimate the long-term,” he says. In other words, take every moment seriously and do not put too much weight on any one of them.

“Lower the sense of urgency,” he said. “Long-term, consistent decisions and behaviors will have tremendous impact for good or bad.”

Holland recommends having more conversations with kids and leading oneself well.

“Unlike how TV sitcoms conditioned us, there is no speech you can give that will turn the lightbulb on for your children,” he said. “But modeling by example makes a long-term difference.”

Under The Radar: Donuts & Devos