Max Weigand is obsessed with what he calls “the potential gap”—the space between who you are today and who you could be. It is this gap that led him into the podcasting space not once, but twice, as he looked to connect with and fulfill his own potential.

Max was born and raised in Germany, but traveled to America to earn his degree. While at university, he fell in love with running, and cross country and track became such a focus that he ended up sacrificing a lot of other things in his life. He believed running would bring him happiness… if he could just win “another” race. He excelled, actually ending up running for the German National Track and Field team at one stage.

Eventually, though, Max decided to stop the all-out focus on athletics. He returned to Germany with no clear plan as to what to do with his life.

“That was a turning point for me. It really made me reflect. I realized that in four years, I had made about two close friends. I had wasted so much potential, and I didn’t want to go another four or 40 years doing that.”

So why a podcast to help max out his potential?

“For me, it was a way to learn from my heroes. I figured if I was going to look at my life and reassemble it, I needed to learn from people I admire.”

Max decided if he could learn to emulate their traits, beliefs, and mindset around things like happiness, mental toughness, presence, and productivity, he would be more able to live a life aligned with what he wants to achieve.

“The more I talk to people I look up to who are already 10, 20, or even 50 years ahead of me in their life journey, the more I can learn now what has taken others decades. And I can start using those lessons in my life to go faster and further.”

So, two years ago, Max started the Mental Mastery podcast, producing almost 30 episodes over a period of six to nine months.

He then experienced what we in the industry call the dreaded “podfade”—despite being very excited initially at the potential, the reality of not being able to generate huge download numbers killed his forward momentum. 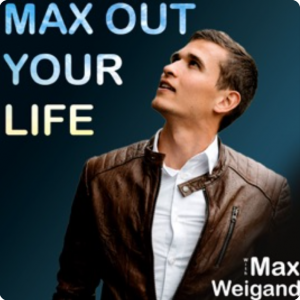 “I realized I was too hung up on the numbers. That’s what killed me. I was so focused on wanting to get thousands and thousands of downloads per episode that, when it didn’t happen after 20 or so episodes, I got really frustrated. I was getting a couple of hundred downloads per episode, but I didn’t feel it was contributing much and determined it might not be the right path for me.”

This situation is quite common. I’ve experienced a version of it myself, and I know many podcasters who have had feelings along these lines at some point (whether they stop their podcast or not).

Max did. He stopped podcasting for around six months, and during that time, he began reflecting on why he started podcasting in the first place.

“It was to meet cool people! Simple as that. I re-resonated with the idea of just really connecting and having a blast.”

That helped Max get his spark back. He was going to try again, but this time, if the download numbers were not where he had previously expected, he was still going to get something out of podcasting that he believed was well worth it—the access to having epic conversations across the world.

Max decided to start from scratch rather than rebrand his previous show. Why?

Because he was inspired by a moment he had at the very start of the COVID-19 pandemic in early 2020.

“I was in Brazil at the time. I got sick, but didn’t want to go to the doctors due to the increased chance of catching the virus there. I was stuck in my hotel, ill, reflecting on wasting my potential, and podcasting just kept coming back up. I realized there were still so many people I wanted to connect with, and that’s when the name came to me: Max Out… by making the most of every single day.”

I too believe 2020 has helped remind us that tomorrow is not to be taken for granted—none of us really know what is going to happen.

So how has it all gone in round two of Max’s podcasting experience? With over 100 episodes released since launching in April, Max says:

“The podcast has really helped me with credibility as well as provided me with insights and ideas for my coaching practice. I’m now running virtual workshops in productivity, motivation, goal setting, and more.”

His biggest podcasting challenges so far have been marketing and growing his audience. But he’s learned a lot, too.

“You have got to enjoy the process. Podcasting isn’t for the money, the fame, or the views. At the end of the day, I do it because I love connecting with people. Those episodes that give you goosebumps and leave you smiling all day… those are what makes it all worth it. Fulfillment really comes from doing the things that make you come alive, lose track of time, and become so present in the moment that you forget everything else.”

Under The Radar: Radio Cherry Bombe