That’s Manny Cabo’s mantra. It’s no wonder this award-winning singer and music editorial photographer is making an indelible mark on the competitive entertainment industry not only with his talent, but by the lasting impact he has on practically everyone he encounters.

Manny broke linguistic barriers when he became the first New Jersey native to have an incredible four-chair turn on NBC’S The Voice. He also showcased his vocal prowess on NBC/Telemundo’s La Voz.

For him, The Voice was an amazing experience. “It allowed me to share my talents as a singer … but it also gave me a purpose. Not only did I turn the judges’ chairs, but I also turned the hearts of many people who doubted me and themselves. I got to use my voice and this platform to be the voice of so many artists out there who have been through the same types of hardships and struggles I have.”

Manny’s most recent devastation was losing his dad to COVID-19 on December 1, 2020. The tragedy has given him a different outlook on life.

“We tend to be focused on the illusions of this world and the accolades rather than the things that matter, like family,” said Manny, who has learned to appreciate every second and every breath.

Manny’s connection with his parents began even before he was born.

Doctors had advised them not to have him, because it wouldn’t be an easy delivery, and chances were, he wouldn’t make it. His dad was defiant:

“Absolutely not. We’re having this kid.”

Manny’s sense of gratitude was unmistakable. “I’m here because of him. That’s why I’m always inclined to favor the underdog and never give up on anyone.” 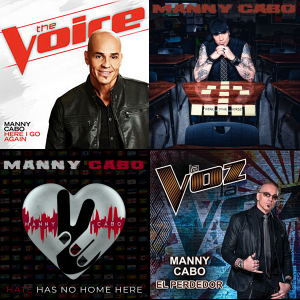 Manny’s dad, a professional photographer, was also the first person to put a camera in his hands. Manny watched his father capturing moments in time that would never recur, and he discovered his own love for photography. His fascination eventually turned into a career, bridging the gap between music and photography for his fellow artists and leading to rare endorsement deals with Sennheiser, Photoflex, and Westone.

Whereas Manny’s father is also connected to his love of music, having raised Manny on a steady diet of an eclectic range, Manny credits his mother, an aspiring singer in her younger days, with teaching him to be a loving person.

Growing up, Manny was often bullied. His mom told him, “You are a beautiful person, because you have a lot to offer this world. Don’t let people skew the way you are because of their negative influences, pitfalls, and insecurities.” She is the main impetus for his anti-bullying and anti-hate messages.

Clearly, Manny’s parents impacted his life in beautiful ways. He vividly recalled his dad’s words just before he took him to the hospital:

“I’m so proud of you, son. Of everything you’ve done. Just promise me that you’ll never give up.”

That’s a promise Manny can easily make. He keeps his life free from toxic experiences and narratives and describes himself as “a big risk-taker.”

“You’ll never know unless you take that leap of faith. What’s the worst that could happen? There are always other opportunities that stem from being bold, because the universe loves a stubborn artist.”

Manny is also now committed to living without regrets. “Live your life, because you’re useless to others if you’re not useful to yourself,” he advised.

That’s the reason he started his Mojo for Musicians podcast. “I give my audience the reason to embrace the why in the music business, and I provide the tools to help them pursue their passion.

“In the entertainment industry, you need to have tough skin. What I’ve found fascinating about the podcasting community is that they are the most helpful, approachable, and receptive people in any industry. I think I made the right decision to get onto Clubhouse, and I’m into my second season. Some of the most incredible, iconic people in any industry are there, and you’re elevated as you mingle with them and learn from them.”

Manny prefaces every episode with tips gleaned from his interactions with Grammy award-winning producers and engineers and Emmy award-winning directors. “I created this channel because I know how frustrating it can be for my fellow musicians to find answers to their questions. So, I decided to provide answers and interview artists who can offer key pieces of information that will help others sidestep the issues I encountered when I was just starting in this career.

“You need to have a clear message. If people believe in your message, they are going to spread that message to others. If you can take your audience on your journey with you and let them know you struggle just like them, they love that… and you’re inspiring them to create their own journeys.” This is precisely what’s been happening among the podcast’s community of “Mojo Maniacs.”

“When somebody has made something easy for me to understand, I see that as the kind of lightbulb moment that I strive for in every podcast episode, every song I write, and every performance. It’s really gratifying to have so many opportunities, through my artistry, to help other people achieve greatness and successes in their lives.”

And perhaps best of all, Manny’s work keeps him true to his dad’s philosophy that he has since adopted:

And his father’s words have proven to be spot on:

“If it’s something you hold true in your heart,” Mannie said, “you never stop or look back. Just keep going forward. Your belief in the truth of your passions will always be your guide.”

With a firm belief in action creating inspiration, Manny is pursuing his passions and helping others do the same.