There is no doubt our idols have a considerable impact on our lives.

But have you ever considered the cultural role they play?

The David Cassidy Connections – Cherish the Legacy podcast was created by a fan, Louise Poynton, for fans. She brings to the fore guests who have never before spoken in detail about David Cassidy’s influence on their lives. In other words, she provides exclusive content for those who can’t get enough David—one of the biggest solo rockstars of the 70s.

David rose to worldwide fame via his role as Keith on The Partridge Family television series. Next, he moved beyond the image of the all-American boy he portrayed on the show and sold out stadiums around the world on tour. A true rockstar and fine actor, he appeared on Broadway and in Las Vegas and London’s West End.

Louise explained, “Many people regard him as just a teenage idol, but there was so much more substance to his work. Musicians he worked with include Mick Ronson and Bruce Johnston from the Beach Boys. He co-wrote songs with Gerry Beckley of the band America. Through speaking with musicians such as Richie Furay and Felix Cavaliere, I bring the real story of David Cassidy’s music to the masses.”

The podcast is a companion to Louise’s book, Cherish David Cassidy – A Legacy of Love—a compilation of memories and tributes. Neil Sedaka was one of many celebrity-fans who contributed to the book, which was shortlisted for a U.S. book award last year.

Louise’s professional skills are instrumental in producing the podcast, too:

“I bring together my four decades in journalism and five decades of being a Cassidy fan to give listeners something new about him that they may not have heard before.

“My guests share how he influenced them, allowing them to find the confidence to carve out a career as an actor, songwriter, or singer. Others speak openly about how he was a role model, especially his large army of male fans who offer a different perspective of fandom. They share how he helped them through lonely days as teenagers, troubled home lives, being bullied at school, and facing addictions.

“David offered a calm space through his music. It is a great honor for me to provide them a platform to share their own stories and pay tribute to one of the greatest American exports. There are many stories of his legacy, friendship, and underappreciated talent still to be told, and I have a number of exciting guests lined up for future episodes. 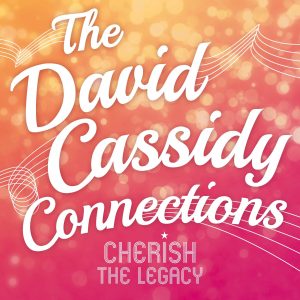 “Together, we examine his back catalog of music. We break down his songs, live performances, and emotive delivery of lyrics, which allow him to stand alone as a first among equals. Many artists have followed him and owe him a huge debt of gratitude.”

“He started out as the lead vocalist on the Partridge Family Songs and later had a bigger fan club than both the Beatles and Elvis. The Partridge Family Songs were very pop, very bubblegummy. David broke away from that sound. It was as a solo artist that he really shone. He had been sold through teenage magazines as this good-looking, all-American boy who was singing songs about love and romance. But there was so much more substance to him, and the podcast reveals more of what his music was all about.”

Louise has interviewed some of those who knew David best, including John Bahler—the vocal arranger for The Partridge Family’s music as well as for David’s early solo work.

“For the television series, John spent lots of time in the recording studio with David, and he told me that he saw the emergence of a superstar… a boy of 19 who had a very unique voice.”

Louise has also interviewed Brian Forster, who played Chris, the drummer, in The Partridge Family, and he shared what he had learned from David as an actor.

Ever the dedicated fan, Louise didn’t stop there. “I tracked down Paul McCartney’s stepsister, Ruth. She was the first person to set up and run David’s initial website, and they became very good friends. She shared amusing stories about her times growing up in Liverpool and Beatlemania, as well as what Cassidymania was like.”

Other celebrity-fans on the show have included Richie Furay, who worked with David and was a close friend, actor and director Bruce Kimmel, who was a regular on The Partridge Family, Brian Forster, who played one of the children in the series, and former teenage idol Bobby Rydell.

For Louise, starting the podcast during the pandemic was an attempt to help others overcome the related sense of loneliness and/or isolation.

“I wanted to bring something that people could relate to… something they would feel a part of. I think it’s very important for people to relive happy times from their youth. It takes them back to that very moment, and it’s a very emotional experience.

“The show has allowed me to delve into the reasons the music you discover when you were a teenager stays with you all your life.”

The David Cassidy Connections is a different kind of podcast—one for which fans come together to celebrate the legacy of a well-loved musician. After listening, you’ll walk away with a greater appreciation of what David means to the world of music and to his loyal fans. Take a listen today!