When Paul Spain first started learning about the tech sector as a teenager, he felt like he didn’t understand everything, and wondered when it would all make sense. That very feeling is what drives him to make sure his podcast, NZ Tech Podcast, doesn’t leave his listeners behind even when the topic is complex. He doesn’t dumb the episodes down, either; rather, he gets his guests to speak in plain, non-tech English–or to be exact, the New Zealand form of English appropriate to a podcast based in New Zealand!

I wondered whether the issues, concerns, and struggles we face in the United States around technology are the same in other countries, which is why I love listening to podcasts about tech from other locations. It is humbling to realize that we are the same, yet not the same.

Paul says he does the same with U.S. shows, but gets frustrated with some shows because they often act as if what matters and applies in the U.S. matters everywhere. As a result, his podcast is purposely a local New Zealand podcast focusing on serving his listener-base with content and guest interviews that are relevant now and in the future.

In addition to having a podcast about tech, Paul also has the NZ Business Podcast, and a technology services company called Gorilla Technology. It helps companies use tech to grow and make a difference in their bottom line and in the lives of their clients. His role in Gorilla Technology provides him the opportunity to see, and anticipate firsthand, the struggles, needs, and complexities the business community and their clients face every day. That firsthand experience guides the questions he asks of his guests and the guests he brings on his show.

After ten years of podcasting, he says “longevity and consistency” are a key part of his success. Those two things have opened doors to guests and sponsors while supporting him in building a reputation that has taken him beyond his office studio to speak on television, radio, and on stages around the world. In this way, he is able to advise others on technology whom he might not have gotten to impact without the show.

His focus may be local, but his reach is global. His guests reflect that global-yet-local thinking because what happens outside New Zealand will affect the Kiwi nation.

Local focus also extends to his family. The amount of time spent running his tech business, hosting two podcasts, helping other business owners who are struggling, and even helping other podcasters with a ‘leg up’ to create more podcasts based out of New Zealand began to take its toll on his family time.

Before he created the studio, Paul would prepare, record, and market the show after his regular workday was done. Now, he records the show during more traditional working hours, from the Podcasts New Zealand studios he created in his Gorilla Technology offices. The family is involved, too, and he watches how he spends his time to ensure his family has priority. His wife edits some of his podcasts, handles the website, marketing, and pushing out of the podcast to all the platforms that house the show. Paul’s son Pablo, who recently turned ten, often watches the live video stream of his show (and also loves to fall asleep listening to the U.S. podcast Bedtime History). And that is the reason you will never hear swearing, bad language, or negative talk on his shows. Since people often listen to podcasts in the car or on speaker, he says, “You never know who will be listening, so why not have a positive influence on the unplanned listener, too?” 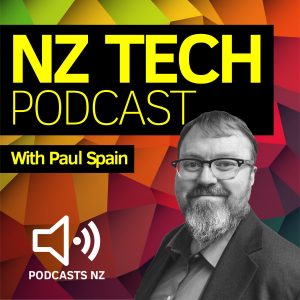 The rule of having a positive influence without bad language doesn’t mean Paul shies away from asking the tough questions, even if they might reflect poorly on a sponsor or vendor. His research is impeccable, and his reach is growing every day.

Many in Paul’s country have low data limits with their cellular carrier, and costs of going over those limits can quickly add up. To help those without (remember, Paul believes in serving his audience), he makes sure he compresses his show, so it has a minimal impact on those data limits. (Meanwhile, I never even thought of compressing my show because, in my reality, it is not important.)

Paul rarely talks politics on his show, but he will when it affects technology and how technology can be used to help New Zealand become more successful. A recent show discussed a globally trending topic around ransomware and whether paying a ransom violates the law and supports terrorism.

If Paul dives into politics, it is to answer the questions:

“How do we help our economy? How do we utilize technology to address some of the challenges that we have as a society?”

Paul also wants to “to see how well our political parties are thinking about utilizing technology for the success of the country.”

Finally, having the podcast has also provided Paul and his team advance access to products before they are released to the public. This has enabled him to influence the direction of products and craft ways in which he can help them get in the hands of those who need them.

Integrity is present in all he does. Each show serves a higher purpose of educating and improving the lives and businesses of all who may listen, read an article he has written, or hear him speak. At the end of the day, Paul hopes that his legacy shows he cared and made a difference… and that no one was left behind when it comes to understanding technology.

The Heart Of A Journalist With A Storyteller’s Soul