If you Google “podcast categories,” you’ll invariably be provided a link that, when clicked, reveals a list. It will almost certainly be one that is based upon the segmentation provided by Apple Podcasts. Odds are, you’ll find a list of about 20 categories, almost all of which will contain at least a few subcategories.

But not True Crime. It is one of the few to stand alone with nary a breakout list, lumping all shows into one big bucket.

Emma Courtland, host of the recently launched podcast Crime Show, might disagree with this lack of subcategories. And rightfully so. Not all true-crime podcasts are the same.

You have your investigative-reporting, hard-hitting ones.

You have your friendly banter/conversational type, where a few people get together to talk about crime, sometimes in an entertaining way (other times, not so much).

You also have those that may be more comedy than true crime, as hosts actively make fun of the mindless stupidity of some criminals.

Yet, even if there were subcategories of True Crime, Emma’s show would possibly land in one all its own—maybe “Experiential.” Or “Empathetic.” It’s hard to say, because despite the show’s title insinuating that it is like many others, it is (at minimum) a little different from what us true-crime fans have become accustomed to in this space. And that little nuance makes a big difference in the listening experience.

Emma does an admirable job of explaining that difference by drawing from her college days. “As an undergraduate, I studied literature,” she shared. “I got really into Dostoevsky and read a lot of his work. I learned of this Russian term [one we here at Podcast Magazine® are not even going to attempt to spell or pronounce]. It means ‘co-suffering.’ We don’t have a word for this idea in English. The closest is ‘empathy,’ but it actually means truly feeling along with somebody.”

Emma went on to explain how Crime Show portends to break down the barrier between the listener and the story. This isn’t to suggest the listener becomes part of the story, but instead that s/he is actually experiencing the story. While it is a tough concept and feeling to explain, most will quickly get it once they dig into a few episodes.

The Crime Show podcast experience begins with Emma’s unique approach. “I trained as an oral historian,” she explained. “I think that is one of the things people notice when listening to Crime Show. We’re podcasters by virtue of the format, but we could be telling these stories potentially in any other format.

“We let the content drive the format,” Emma continued. “Podcasting has been wonderful for us, but I think of us as journalists, as oral historians, and as creative non-fiction storytellers who work in podcasting.” While it may seem like semantics to some, this is the difference that makes Crime Show special—and it no doubt contributed to the show becoming a standout in the True Crime Category in a very short amount of time.

With Emma’s format, she acts as the support—instead of the focal point—of each episode. “I am more interested in what the story means to the people who lived it,” she confessed. “That’s primarily what we are after. When I am in the story, I am mostly functioning as a translator, while adding context to the larger experience of a crime. So I’m filling in where I can, but trying as much as possible to have a soft touch when I do… to build a sense of setting and atmosphere… of feeling.” 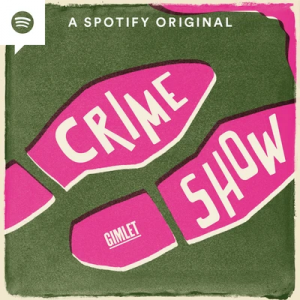 Crime Show episodes take the listener on a journey that many may not expect in another way, too: the stories they tell aren’t your typical cases.

While most true-crime aficionados may be used to hearing the 12th alternative angle to the Golden State Killer case, Crime Show focuses on lesser-known but highly intriguing stories. You won’t hear 57 retellings of a young White girl getting bludgeoned to death with a strange object and a focus on the hunt to find the killers.

But you will hear stories like “Scums.xls,” about a man who is threatened by a telephone scammer and then spends years tracking down the person responsible. And in “Don’t Click This Link,” you’ll learn about a junior-college student who tricks people into downloading a program to their iPhones that automatically dials 9-1-1.

A lot of time is spent among the Crime Show production team to cover stories that listeners may not hear anywhere else. “We have a pitch meeting once every two weeks,” Emma explained. “We put in two hours. The whole team comes with stories, and we pitch each other’s stories. We just know it when we hear it. We literally find stories all over the place.”

Emma shared an example of how unusual sources eventually give birth to new episodes. “‘A Man With No Name’ is a story I found in an old psychology journal. I searched the word ‘crime,’ and it was article number four that came up.”

“A Man With No Name” is a prime example of the different brand of true-crime podcast that is Crime Show. The perpetrator in this story, Stephen Brinker, may also be a victim himself, given his claim of amnesia. He legitimately seems to not remember the crime for which he is still serving time.

“I think about this story a lot, actually. In Western society, we are taught to think of things as binary. Is this a good guy or a bad guy?” Referring to Stephen Brinker, Emma continued: “He couldn’t be the victim if he is the perpetrator, right? And if he is the perpetrator, how can we show him humanity? That’s what our show wants to explore—all dimensions of humanity.”

It’s not just about finding lesser-known cases, though. There is a formula or, as Emma put it, “a secret sauce.”

To further the depth of detailing the uniqueness of Crime Show, Emma also made an unusual admission. “My biggest influences are X-Files and The Simpsons,” she laughed. While the X-Files reference may not be too farfetched for the genre, she expounded on her love of The Simpsons and how it ties into their podcast production:

“‘The MySpace Misdemeanor’ episode is a total example of a Simpson’s structure. You start with a story about a crime that is not the crime you are going to be covering, and then it transitions into a completely different story.”

Non-traditional influences and a different approach make Crime Show a rare find in the category. And a good portion of that uniqueness comes from the host. Emma is a multifaceted individual, and Crime Show is complex. Maybe there’s a special Russian phrase to describe it… but for now, we’ll just call it “distinctive” and “entertaining.”

UTR: We Got This! with Mark and Hal