Primatologist, anthropologist, and activist Dr. Jane Goodall’s research with chimpanzees is considered one of the greatest contributions to science in the 20th century. She graced the cover of the National Geographic in 1963, and her work is taught to students of sociology and anthropology throughout the country, which is how I learned of her in college. (Readers unfamiliar with Jane’s story are invited to visit the Jane Goodall Institute online for detailed information about her research and life’s work.)

Pre-pandemic, Jane was still traveling globally, 300 days a year, at 86 years old. But as Covid began sweeping the world, she went into lockdown in her childhood home in Bournemouth, England. Like so many of us, she adjusted and pivoted, personally and professionally.

It’s no surprise that Jane was concerned about chimpanzees catching Covid, too… so, the Jane Goodall Institute set out to help.

“JGI began in 1974. We now have an institute in 24 countries, and they are all independent NGOs. But they all share a mission statement and have signed the charter. We also have the global Jane Goodall Institute, which is mainly to coordinate and make sure that our sprawling family behaves itself,” Jane jokes.

“I’ve also started the Jane Goodall Legacy Foundation, which aims to develop an endowment that will allow my work to go on when I’ve gone. It’s meant to be there when there’s an emergency and one of the Institutes desperately needs funding. For example, with the pandemic, we of course had to try and protect the chimps. And that meant getting gowns and masks and sterilizers to all our staff and laying some of them off. We wanted to pay them, so we could bring them back when lockdown was finished. There were many unbudgeted expenses.

“We’ve been praying that Covid won’t reach the two sanctuaries for orphan chimps. It’s been relatively easy to control there. But in a national park, with wild chimps, there’s only so much that can be done. We can’t stop them from going out to the villages. We can’t stop women from going into the forest to collect firewood. Touch wood—so far, we’ve seen no infections. We monitor them, so we know there’s no sicknesses.”

While many used their time in lockdown as a respite from the hustle and bustle of commuting and traveling, others, like Jane, took on the new venture of podcasting. (In fact, the number of podcasts grew from 850,000 in January 2020 to nearly 2,000,000 in January 2021.)

“When they proposed I host a podcast, I thought it was a good idea. I was unable to travel and lecture, so we decided to create a virtual Jane. And virtual Jane has been about three times busier. Traveling 300 days a year was exhausting, but being virtual Jane is much more so. It’s hard on the eyes; it’s hard on the voice. I didn’t even take a Christmas break. There are non-stop Zooms, Skypes, podcasts, webinars, and lectures. And giving a lecture to a spot above the laptop is very different from an auditorium full of excited people. However, virtual Jane has been able to reach millions more people!”

Jane had of course been a guest on several people’s podcasts, so podcasting wasn’t completely unfamiliar to her. She and her team knew they wanted to provide diverse perspectives from inspirational changemakers while being inclusive. To make sure they did so successfully, they sought guidance from podcaster extraordinaires like Tim Ferris, Krista Tippet, Kara Swisher, and Guy Kawasaki.

They officially launched The Jane Goodall Hopecast on December 30, 2020, just in time for New Years! 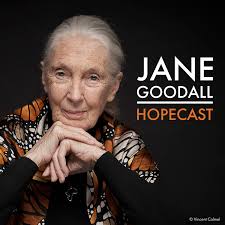 The word “Hopecast” embodies the principles and message Jane shares with the world… all centered around the interrelatedness of the web of life:

“Everything’s interconnected,” Jane shares. “You’ve heard about climate change and the climate crisis. That’s come about because we’ve totally disrespected the natural world. We have the absurd idea that we can have unlimited economic development on a planet with finite natural resources. In some areas, resources are used up faster than nature can replenish them. We’ve got a growing human population. And we’ve got dire poverty in many parts of the world, which causes people to destroy their environments in order to live—they do what’s cheapest. And then we’ve got the rest of the population living unsustainable lifestyles. The planet can’t take it much longer. We depend upon the web of life, and we separate ourselves from it to our peril. In fact, we need nature. It’s been shown that when nature is brought into a city, crime rates go down. There are less mental health issues and even less physical health issues. People are happier, and work performance goes up. Children especially need nature for good psychological development.”

Jane’s gift of being a natural storyteller made hosting a show an easy transition. She believes she inherited that from her Welsh grandfather.

“It started with writing,” she reflects. “I was writing stories when I was four. My mother wrote them down for me, though. Remember, when I was growing up, there was no television. I grew up in the war. And of course, the war was filled with stories of heroism, as well as those of horror. Storytelling came naturally to me.”

Unlike many podcasters just starting out, Jane didn’t have to worry about growing her audience right out of the gate. She already had a global audience and social media presence.

“I don’t do any of those things,” Jane shares. “The institute does them for me. I do emails and video messages and things like that. But I absolutely don’t have time for social media. Each of the JGIs [Jane Goodall Institutes] has their own social media setup.”

What Jane does love doing, though, is inspiring and empowering young people.

“I spend so much energy on our grassroots youth program, Roots & Shoots, which is in over 68 countries now, including five African countries, China, North and South America, and other parts of Asia and Europe. It’s tremendously important. We’ve got members attending university, and a lot of alumni, because it began in 1991 with high school students. And now, they’re out there in decision-making positions as parents, teachers, politicians, and lawyers. The program is for everybody. Participants choose from three projects: help people, help animals, or help the environment. The projects vary depending upon the country.”

Getting guests for the Hopecast hasn’t been difficult, but like most podcasters, Jane has a list of dream bookings: “Craig Foster, of the film My Octopus Teacher. I would also like to have Yo-Yo Ma, and President Macron, because I think he’s got some really, really good ideas. We haven’t asked him yet, but I would really like him to be on the podcast.”

To build community during Covid, a special feature of the podcast is titled “Mailbag Tuesdays.” With it, a “Hopecaster” (members of Jane’s community) can leave a recorded question or message of hope for Jane, and Jane responds to them on the podcast.

While the past year has kept Jane in her childhood home, she did make one new magical friend.

“I have my lunch with an English robin redbreast. It’s most extraordinary. He comes to lunch, out under my favorite tree, that I used to climb as a child. My lunch is half a bit of toast and a bit of cheese. And maybe a piece of broccoli; it’s very small. And the robin comes and sits on this low branch and takes a little bit of food before just sitting there for 10 minutes. And I sing nonsense to him or her, I can’t tell. And he puts his head to one side and then the other, and he listens to me and occasionally sings back. It’s a charming duet that lasts not more than five minutes, but we’ve been doing it every day since April, except for the three days he missed.”

Celebrating her 87th birthday on April 3, Jane offers you, Podcast Magazine® readers, the same advice she offers all human beings on this walk of life:

“The most important thing of all is to remember that every single one of us makes an impact on the planet every single day. And we have a choice as to what sort of impact we make. What do we buy? How is it made? Does it harm the environment? Was it cruel to animals? Is it cheap because of child slave labor or sweatshops? If billions of people begin making ethical choices, then we have a chance.

“The main thing is hope. If we have none, then that’s the end. Because if you don’t hope that what you’re doing is going to make a difference, why would you bother to do it? Giving people hope encourages them to take action. And if we don’t take action, we’re going to fail, and our future on this planet will be limited.”