Recently, I watched the People’s Choice Podcast Awards. When the host announced DNA Today as the winner in the Science & Medicine category, my interest was piqued. Then I heard Kira Dineen, the host, mention in her acceptance speech that she had been podcasting for nine years—since high school.

Having listened to her first podcast during a flight, Kira was hooked. A few years later, she wondered to herself, “What if I start a podcast and see how it goes?”

Kira had always been interested in literature and was a fan of Harry Potter and The Hunger Games. She thought: “[Hunger Games] could be the next Harry Potter. I saw creating a podcast as an avenue for people looking to connect with other fans. Our angle was to structure the show in a way that engaged fans. When people asked, “What’s a podcast?” I described it as internet radio show.”

Kira’s first podcast was named Nightlock: A Hunger Games Podcast, which she started in 2011 with a couple of her classmates. They discussed the book series, chapter by chapter, as well as the movie once it was released. Kira felt “It was a fun way to explore podcasting and figure out how everything worked. Back then it was a little harder to do everything by yourself. Today, there are so many ways to start a podcast.” 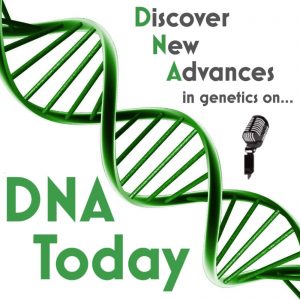 In Kira’s senior year of high school, she started the DNA Today podcast. “It began as an independent project. Usually, my high school offered a bioethics class once a semester, but they weren’t offering it the semester I wanted it. One of my co-hosts from the Nightlock show joined me to launch a genetics podcast as an independent project to explore various bioethical issues. So the show began with bioethics debates about genetic topics. I always found genetics to be really interesting. And I knew I wanted to do something in genetics, but I didn’t know what a career in genetics looked like. I realized I could do lessons about genetics by interviewing experts and explore different career paths. And once I learned about genetic counseling, I quickly grabbed onto it.”

Kira enrolled at The University of Connecticut to pursue that area of work while continuing podcasting. In her sophomore year, her show was syndicated with WHUS91.7FM, the campus radio station. “I thought if I could do a live radio show, I could later release the recording as a podcast episode. Suddenly, in 2014, I’m live on air! It was very nerve-wracking and different from being able to edit afterward. Anything I said was going to be out there. It was really kind of scary to just jump on air.”

Kira managed to balance her course load with her weekly talk show. One of the exciting benefits of her live radio show was that she found it easier to schedule guests.

Now, six years later, Kira’s show continues to broadcast on the University radio station today, though it is no longer live.

Kira has interviewed many interesting guests over the years. One of her most memorable episodes was the one featuring Henrietta Lacks’ family members.

“Henrietta Lacks was a Black woman who had cells taken from her cancer without her consent. Those cells were then grown in the laboratory, which was a first for scientists. And there have been numerous, honestly, countless scientific advancements that came out of it. The cells are even called ‘HeLa cells,’ from the first two letters of her first and last name.”

In fact, one of Kira’s favorite books is The Immortal Life of Henrietta Lacks by Rebecca Skloot. Kira animatedly explained:

“The book is a merge of science, communication, bioethics, and genetics wrapped into one exciting story. Rebecca spent 10 years researching the information about the Lacks family. And she spoke at the University of Connecticut when I was an undergrad. I briefly met her, and then I was able to interview a couple of Henrietta Lacks’ descendants to discuss the significance of her cells and the impact they had on science. I think that was my first interview that I knew I was going to be starstruck. It was an honor to talk to them.”

As a recent grad school graduate, Kira’s listeners can contact her for information about careers in genetics/DNA. She has also dedicated multiple episodes to answering their questions.

“Grad programs for genetic counseling are competitive, and there’s about a 30% acceptance rate. We try to explore a lot of those topics on the show, so that we can help people with their applications, choosing schools, admissions, and what to expect in grad school. I’ve interviewed over 30 genetic counselors on the show, exploring their specialized areas of interest.”

Recently, Kira began her career as a prenatal genetic counselor. She works with pregnant women and talks with couples about the genetics of their pregnancy to help them make educated decisions.

“The counseling part comes down to being able to connect with patients and have them explore their feelings around certain concepts and what they’re going through. And if they have results that indicate high risk, or abnormal results, we help them process that information, so that they can make the best decision for their families.”

Kira now has a team of three women assisting her with her podcast and managing her social media accounts. She recently started her YouTube Channel, and as she looks toward the future, her dream guests include Francis Collins of the NIH, Bill Nye, Dani Shapiro, and recent Nobel Prize winners Emmanuelle Charpentier and Jennifer Doudna.

It’s Kira’s hope that “We come across as relatable, so anybody can listen to the show. You don’t have to be in genetics, science, or healthcare. We want to make the episodes understandable for anyone listening. Sometimes, if a guest starts getting too technical, I’ll try to break down what he or she is saying. And there’s certainly a couple episodes where we dive deeper into genetics, so some of it might be advanced, but for the most part, the episodes are really for anyone, to educate the public on topics related to genetics.”