One day, while Charlotte Stoddart was home listening to the first season of Knowable Magazine’s podcast episodes hosted by an old nature colleague of hers, Adam Levy, serendipity paid her a visit.

“I thought, ‘Oh, this is good,’” Charlotte stated. She found it so interesting, in fact, she sent Adam a message saying, “I love your new podcast!” He replied with, “Oh, great, thanks. Would you like to work on season two with me?”

Fast forward a year, and Charlotte has not only worked on season two of the podcast with Adam, but also with Knowable Magazine.

“Working with someone you’ve worked with before makes it a little bit easier,” she stated. She also acknowledged that she knew it was going to be a great project, if Adam was involved.

As a freelancer, Charlotte also works with other science publications. Previously, she worked for the science journal Nature for many years, running their multimedia team. That team launched The Nature podcast in addition to making animations and documentaries about science.

When asked about a day in the life of a freelance scientist, journalist, and podcaster, Charlotte had much to say.

Every day is quite different for this mom of two young children. An expat living in Germany, she is figuring out life in another language while juggling her work with the Knowable podcast and making animations or documentaries.

Charlotte’s day starts with either taking her daughter to school or her son to kindergarten, and then coming home and making a coffee, which she always finds helpful. Often, she’ll then read and reply to emails about new projects. Then, she digs into some research; in particular, for the Knowable podcast, as it is research heavy. 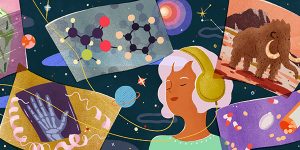 Each episode of Knowable is 30 minutes long and tells a story about the history of science, one idea, or one aspect of technology, at a time. For example, one episode is on particle accelerators.

Charlotte and Adam often go back to the beginning of the 20th century in their quest for the seed of that technology or idea. They then trace it through the development of the idea, often examining key related research papers, right through present day.

Since some of their topics were previously unfamiliar to Charlotte, she says she’s learning loads along the way, too.

After completing her research, Charlotte may or may not interview a scientist connected to the theme of their episode. Quite often, they are in a different time zones than hers, which means sometimes, after making dinner for the kids and putting them to bed, she’s back at her computer.

“It requires a kind of switching of my brain back into not only podcasting mode, but science mode—specifically, around the topic of that episode.”

Once the research and interview stages are done, it’s time to structure and script the story. Since each episode of the Knowable podcast is heavily scripted, Charlotte uses quotes from the interviews she conducts.

“The quotes I like best are the ones from scientists who’ve been in their field for decades,” she shared… like the Nobel laureates and professors who’ve been working in their field for 60 years. When they go back to their early careers and share about what it was like for them in the 50s and 60s, Charlotte is fascinated. “You get an insight into what it was like being a scientist decades ago… before advancements like the really fast computers we have today.”

Richard Henderson, an X-ray crystallographer who pioneered a technique in molecular biology called “cryo-EM,” spoke with her about the 1960s work in Cambridge. It required numerous calculations, so they would punch their data into the computer cards of early computers. Then, a team of mostly women  called “computer girls” would take boxes of computer cards from Cambridge  to Imperial College in London. They’d get on the train, exit it underground, and walk through a long tunnel before finally arriving at Imperial College. All this so they could access one computer to crunch their data during their allotted single hour of use. They would then carry the results all the way back to Cambridge.

The next morning, the scientists in Cambridge would look at the results and base the experiments for that day on them. And from there, the process would repeat.

“Hearing those stories is really incredible, because you realize how much effort it was just to crunch a little bit of data, and how these people really were so determined to get results,” Charlotte said.

Check out season two of Knowable to hear Charlotte host three episodes on dreaming and the structure of proteins and particle accelerators, along with three more topics hosted by her colleague Adam Levy.