How about carnival acts, including contortionists twisting into shapes beyond our wildest imagination?

You might assume that a Ph.D. in political science would be hosting her own podcast about politics, science, or math, but think again!

Andrea Jones-Rooy, Ph.D., has many facets of expertise, including data science, circus contortion, and comedy.

“Really, I got into science by accident,” Andrea said. “When I finished college, I had a major in international relations, which, in the early 2000s, was a sort of generic major for people who didn’t know what they were doing with their lives.”

Andrea enrolled in a Ph.D. program in political science thinking she would be writing essays about the nature of war, justice, peace, and sweeping topics of the like. As it turned out, though, including the word “science” in the title of the degree was quite deliberate. She learned a ton of math, statistics, game theory, and programming.

Growing up, Andrea was afraid of math and uninterested in science. Her goal as an undergraduate had actually been to minimize her exposure to anything with numbers—she didn’t take a single math or science class. But, while working toward her Ph.D., she fell in love with both subjects.

“I feel very lucky that I stumbled into science without really knowing what I was doing,” she said. “If I hadn’t totally misunderstood the field I was enrolling in, I would in no way be living a life that touches the science world in the slightest. Generally, we tend to talk about science in a way that infers it can’t be touched by anyone who isn’t wearing a lab coat and holding a beaker. I feel very lucky that I have a front-row view of science now.” 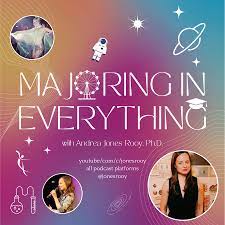 When it comes to the data science studied in the political science program, Andrea says that numbers are just a way of understanding and describing the world in quantifiers rather than adjectives. It also means using evidence that is collected as data to inform decision-making.

“Once I got my head around that, I was like, ‘Oh! It’s just shorthand for something else.’”

The data doesn’t have to be numeric, either. Text is data, too, and Andrea spends a lot of time using it in a thoughtful, principled manner in order to better understand, explain, and make predictions about the world.

After hosting a podcast around data science for a few years, she decided she’d like to start another show to expand.

Her topic of choice for that new show, Majoring in Everything?

“I spent a lot of my life feeling bad about my inability to just pick one thing to focus on. So, selfishly, I wanted to try to feel better about it by talking to people who I think are awesome and happen to share that inability to focus.”

As for choosing podcast guests, Andrea follows her father’s sage advice. A documentary filmmaker, he once told her that the meaning of life was to shine a light on something important. She chooses to feature people she finds inspiring and feels others should know about. She enjoys introducing them and the interesting things they’re doing to her audience:

“Who can I spotlight? What are some things I can spotlight that I think are important, getting away from my own ego?”

To demonstrate the types of guests she features and the topics she discusses, Andrea once spotlighted Paula Croxton, host of the Story Collider Science Podcast. They discussed how Paula went from very serious laboratory neuroscientist to wandering around open mics, telling stories and inviting others to share theirs. She also used storytelling to get people excited about science. During the interview, Andrea learned that Paula is also a flute player for a widely regarded band that travels all over the place as well as a distance open water swimmer who swims down the Hudson River and around Australia.

Clearly, Andrea highlights the Majoring in Everything pieces in her episodes.

Another of the many hats Andrea wears is that of a circus performer. She specializes in trapeze and contortion, and has invited her contortion coach to appear on her podcast. In that episode, they discussed his variety of interests, which include art and design, architecture, and engineering, in addition to contortion.

Andrea also performs standup comedy in New York city. (You can check her out on Instagram, Twitter, and TikTok—@JonesRooy.)

Recently, she hosted the Data Science Spectacular in New York, NY—a one-hour solo show demystifying data science in the hopes of getting more folks involved. In it, she combined all three of her passions: data science, comedy, and the circus.

Majoring in Everything is part of the World’s Smartest Podcast Network. Check it out if you’re interested in… well, everything!