Taking a stand for women in elderhood was an easy “yes” for Gail Zelitzky (who happens to be Podcast Magazine® Founder and Editor-in-Chief Steve Olsher’s mom).

Via interviewing 70 women over the age of 70, she intended to shatter the myth that women become irrelevant as they age.

She approached her faculty mentor from DePaul University, Catherine Marienau, with the idea.

“In my faculty position, I taught a course on women’s issues for many, many years. As a mentor and teacher, this gave me a wealth of experience interacting with women in their more mature years—40s, 50s, 60s— about what they aspire to and how higher learning can help them achieve what they want. I have also been involved with a small study with a longtime friend, who, as she was turning 70, was interested in exploring what the landscape is for women who are still vital and active after 70 years of life. We’ve had this longitudinal study going on since 2016, and it parallels nicely with what Gail and I are doing with this podcast.”

Gail and Catherine met their goal of 70 interviews, and now, they’ve conducted more than 170. Once they began the project, it wasn’t too far of a leap to transform their content into a podcast.

“It was my son who got me interested in podcasting. I was working with him a little and going to his conferences, meeting all the wonderful people. And I caught the bug. I began to think, ‘What can I do in this arena?’ I’d been a business coach for 20 years; how did I want to transition myself? And so I began to get this idea as I was turning 70 that it might be interesting to interview women over 70. Hearing the pitches from potential guests at the New Media Summit that Steve conducted and listening to how everybody was expressing themselves really put the idea in motion for me.”

For Catherine, podcasting was a brand-new world, complete with a whole new language to learn, but with an investment into the online podcast immersion course and Gail’s expertise gained from the New Media Summit, it quickly became a simple matter of reaching out to their individual networks, lining up guests, and hitting the “record” button.

The podcast is the central feature of Gail and Catherine’s work, but they’ve already expanded beyond simply interviewing and exploring issues common to women over 70. 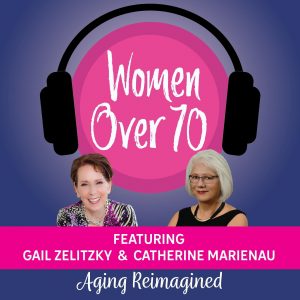 They have developed a membership group, wherein each month, they explore three podcast episodes around a particular theme, which members are encouraged to listen to ahead of time. Then, on a monthly basis, they bring in a guest expert for a “deep talk” on a subject of interest to women.

When it comes to the monetization question, Gail shares that she’s been in business for herself for her entire career and has had a number of different partnerships, some of which worked, and others that did not. With this particular project, she was focused on truly collaborating with someone with the intent of monetizing down the line.

“I wanted to collaborate with someone who cared about women’s issues as they age the same way I do. Saying, ‘Okay, we’re going to do this together, and we’re going to be partners’ came very naturally. We never overthought it. We incorporated, became an LLC, and split it 50/50. And we hoped that we’d last long enough to monetize it together and make it all worthwhile.”

Catherine, who hails from academia, is used to successful partnerships, and views her role as a faculty mentor as such—she is a partner with her students.

“I was a partner with Gail as she was planning and carrying out her individual graduate programs. So we already had a way of relating to each other… we had that rapport. I think we had a strong element of trust, too, and we absolutely shared views and concerns about women—how women are, how women are viewed, and how we’re treated as we age. It’s just been very natural. We decided we would do almost everything together. Although Gail, with her good business sense, does more of that side than I do. But I’ve made a commitment to learn more, as well, so it’s not just her burden.”

“Recently, we’ve had conversations about how to handle our business if one of us goes first. We’ve decided to keep it at a very low level of legalese, so it’s easy. We’re too old for it not to be easy. I just made up my mind that I was not going to go down that path of laying out every detail around how things get split up. Now, this is NOT what I advise my coaching clients, mind you. Since I’m eight years older than Catherine, chances are I’ll go first. And then she can deal with it,” she jokes.

There are three top issues that Gail and Catherine are working to transform with the show, membership, and coaching they offer:

First is the concept of ageism: specifically exploring why the age that is attached to an individual affects their worth when their value doesn’t change. After all, she still has all the wisdom, experience, and knowledge that she had a year before. And yet suddenly, as an “older” person, she’s pictured in “cartoonish” ways.

The second issue is the specific impact ageism has on women, who have historically been viewed as lower scale in the eyes of men, bosses, and the world. They want to share the stories of women who continue to fight this stigma. It’s a hard fight, at any age.

The third issue is finding ways to continue making a contribution when working 70-80 hours a week is no longer either feasible or desirable while simultaneously focusing on supporting and maintaining good health. According to Catherine, most of the interview guests are grateful that they are in good health (or good “enough” health). They look ahead and are doing everything they can to stay healthy. The focus is on exercise, moving and movement, sleep habits, good food, and all the things that are needed to keep our bodies and minds active and vital.

“I think making those choices is a challenge for many women. Most women over 70 are wondering, ‘Where am I now? Who am I becoming at this stage in life?’”

Women Over 70 is actually for women of any age. Look to this show for support as you create a path for yourself to move forward.

“What we’re told is that Women Over 70 inspires women of all ages,” Gail shares. “That the stories the women themselves tell are inspirational and filled with gratitude. They share their most passionate pursuits and losses with us, and what it means to age… to look in the mirror and watch your face and your body change. You can learn from us and our guests, and discover that it’s not a scary step. It’s life.”