Originally from London, England, Edd Dawson-Taylor has made his home in Los Angeles, California. He is now training the next generation of visual effects artists and filmmakers through the CG Pro Podcast.

“Most of my work in computer graphics for film has been special effects—making magical things that don’t exist come to life, combining them with live action, and making sure that they look like they belong together.”

Edd studied computer science and was originally a software engineer in England for six years or so. However, even while he was leading a team of software engineers, his passion for computer graphics was ever-present.

Eventually, Edd decided it was time to turn that passion into a job, so at the age of 26, he retrained and jumped into his new career with both feet. His first job was on the production team of the Harry Potter film based on the fifth book in the series. He also had a great mentor who opened the door for him to work on several commercials, music videos, and TV projects, and a bit of film.

“It all began when I watched Jurassic Park as a kid of about 14 years, and I started dreaming of creating similar effects. Even as I got a bit older, I felt I was way too young, had the wrong nationality, and no skills. But I had a dream, and I kept it alive. I kept my eye on my goal and worked at it for 20 plus years. I boldly applied to ILM [Industrial Light & Magic—George Lucas’s visual effects company], where I was hired and got the opportunity to work on Jurassic World. It was super cool, very hard, and very rewarding.”

Edd also went on to work on The Lion King, leading the Virtual Art Department.

He stays up to date on the evolution of the industry. “The major change in the last five years or so is seen in the use of images in filmmaking. We used to have to do what was called ‘rendering’ to make imagery. That meant sitting in front of your computer waiting, so having it happen in real time is transformational. This is an exciting time in filmmaking. We’re seeing a renaissance in the way we make movies from ground zero. 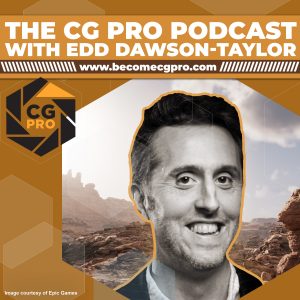 “For anyone starting out, I recommend trying Unreal Engine, which is an unbelievable tool. It’s exquisite and free. You can bring in a massive amount of free assets, like rocks and plants, and animate them. And the other cool thing about it is that it works in real time.”

Edd and his wife, Jackie Cooper, who is the producer of the podcast, wanted to have multiple free offerings, so they created a free CG Pro Facebook group and started the podcast almost a year ago as a means of providing free training.

The podcast has been a labor of love for the couple. Edd said, “I enjoy uncovering our guests’ early inspiration and their breakthrough moments. It’s all about people’s passion—what makes them tick, what they really love about what they do, and how they made it happen. I believe it’s important to do what you love. We’ve had some incredible people on the show, including Academy Award winners.

“One of them is the acclaimed VFX designer Kevin Mack, who won his Academy Award for What Dreams May Come. I’ve also interviewed Visual Effects Supervisor and Director Scott Squires, whose first film was Close Encounters. He’s as humble as he is talented.

“We try to get people from different backgrounds to come on the podcast—females, in particular—because there are more men than women in this industry.”

Edd and Jackie have also started a school through which they teach people how to use techniques like virtual production.

“The Mandalorian provides a good example of this filmmaking technique in action. A big LED screen is used to project and display a world behind the actors. That film popularized the virtual production technique, and it’s now being used by many of the large studios in some form or other,” Edd explained.

“We started to focus on teaching people how to use this technique. We also help studios find talent.”

Edd is not only multi-talented, but multi-passionate. “Computer graphics was a hobby that I turned into a job. Another big passion of mine is playing the saxophone, which I’ve done for 33 years. I miss it dearly. I love playing music, particularly with other people. There’s definitely magic in that for me, but right now, I don’t really have time to dedicate to it. When our two daughters and the business are older, I look forward to getting back to that a bit more.”

Edd’s face lit up as he spoke about his favorite pastime. “Spending time with the family is always a pleasure for me, and we’re very lucky that we live just two minutes away from a hiking trail or 15 minutes from Malibu. If you told me when I was in my teens that this would be my future, I probably wouldn’t have been enthused. But it turns out that this is what I love.

“You only get one life, and it is meant to be lived experientially. Pay attention to the things that speak to you. Follow them, and surround yourself with people who lift you up and challenge you a bit to be your best… people who support you. Don’t spend time with people who pull you down and make you feel bad.

“I’m living proof that anything is possible. I didn’t have a clue that I was going to do some of the things I’ve been able to. If you keep your goal in sight and chip away at it one day at a time, your dreams can come true. Go out and find something you love.”

Great advice from someone who is leading the way for aspiring visual effects professionals with the CG Pro Podcast.