Admiration and respect for each other, deep knowledge of their industry, and a passion for telling stories are just a few things you will discover when you take a listen to Heads in the Cloud, a podcast created by telecommunications company Star2Star. Hosts David Portnowitz, John Roth and Frederick Weiss, with occasional hosting for a special Women in Tech series by company President and Chief Revenue Officer Michele Accardi, work together at Star2Star handling all things marketing and creative.

David is the leader of the group and the CMO (Chief Marketing Officer) of the company but hosting duties are more fluid. John, VP & Creative Director adds levity along with an insane depth of knowledge gained from his 37 years in the industry. Behind him on the video call was an old, working Bell Telephone sign that used to point the way to a telephone booth. If you don’t know what Bell Telephone is, or a phone booth, reach out to John and he will gladly give you the history of the phone. Frederick, don’t call him Fred, Sr. VP Training & Learning Management Systems, is the youngest of the group who has also hosted his own show, Thunder Nerds since 2015.

Food seems to be a common love for all three along with diners. John even has a dish created at their other office, local Sarasota, Florida diner, Crager’s. Imagine meatloaf with Eggs Benedict. Interesting combination but that is what they are. An interesting combination.

Their love of food and fun, takes a unique turn on the show with John’s critically important rotating closing questions to shake things up including, “what is your favorite sandwich?” A worthwhile question considering their show is all about communications, the world of Unified Communications that is, but still about how we communicate and food is one of the oldest forms of communication. One episode saw them go on for about ten minutes on the merits of mayonnaise. 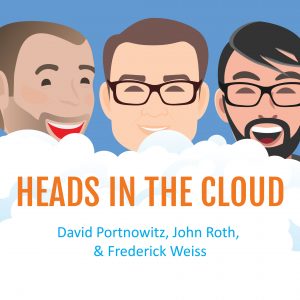 Deep in technical knowledge and expert in interviewing skills, the trio brings a refreshing voice to all things technology and the cloud. Witty repartee is not just reserved for the show. It is apparent that the trio are like that on and off the air.

The idea for Heads in the Clouds was given birth at an event in San Francisco. The original hosts were David and one of the original ten employees at Star2Star, Graham Potter. Like John, Graham is a veteran in the field and he and David plumbed the depths of their robust relationships in the industry to bring people onto the show. Analysts, vendors, partners and even customers of Star2Star continue to share their stories and parry intellectual thrusts with the hosts.

John took over when Graham retired and then Frederick was added to round out the team, each with a unique voice and diverse backgrounds that make the show enjoyable to listen to even when the topics go deep.

David and John are that rare breed of Floridian, natives. Born, raised and never left. Frederick is a transplant from New Jersey. All three are family men. David has begun collecting bourbon and has amassed a diverse assortment with the exception of a bottle of Pappy. Frederick is a musician who, in his younger days was a lead singer in a band that toured from New England to Florida. And John? Well, you can typically find John behind his Traeger grill or out on the waters of Lake Placid, Florida water skiing, tubing or boating with his three kids, five grandkids and wife.

One theme runs through all of their individual stories…”live life fully because you are only here once so enjoy.” Their show reflects this theme as they weave curiosity, technical knowledge, a killer line-up of guests from within the industry and a few whimsical moments including the age old question that no one knew they needed the answer too, “is a hot dog a sandwich?”

At the end of the day Heads in the Clouds is a show about Cloud technology and Unified Communications. Or is it? Frederick says that their “rhythm was organic and immediate.”

Decide for yourself when you listen to the show. If you do, be prepared to laugh, be inspired and to learn a lot about technology in the Cloud and the people who make it all happen.

UTR: Does Not Compute