In May, many of us celebrate both Mothers’ Day and Police Week. That makes this feature particularly special, and why I chose to highlight Angeline Hartmann—mom, Emmy-award-winning broadcast journalist, and host of the Inside Crime podcast.

I first came across this show when a colleague of mine, Tallahassee Police Officer Sean Wyman, was featured during the show’s recent season which focused on Survivors and Heroes. Having personally featured Sean previously on Beyond the Call, I was compelled to listen to Inside Crime’s December 10, 2019 episode.

I was immediately hooked on the show.

A seasoned journalist with a passion for crime fighting, there’s no question that Angeline is skilled at truly digging into a story. In each episode, she delivers a fresh and honest perspective from law enforcement, victims’ families, and survivors about their unique experiences inside crime.

This comes as no surprise, as Angeline served as a correspondent and producer for the iconic television show, America’s Most Wanted, working closely with law enforcement agencies across the country, profiling their most dangerous fugitives and unsolved cases.

Our discussion began around the Sean Wyman episode. “He was such a good interview,” Angeline commented. “It’s about introducing people to the person behind the badge, and I think that’s important.”

We dug deeper into Inside Crime’s theme of Survivors and Heroes last season. “At the heart of it, stories are stories,” she opined. “These days, it’s nice to hear positive stories. Whether they are in law enforcement or a similar career (or survivors), many of our interviewees end up turning their situations into something positive. Nine times out of ten, they want to share that message with the public. If we can provide that opportunity on Inside Crime, we are happy to do that.”

To that end, we delved into the last episode of the season highlighting the story of Tempe Police Officer Lindsay McCall Long, who was shot three times in the line of duty on October 29, 2018.

Half-jokingly sharing a blessed connection of never having been wounded by a firearm, Angeline and I were also both intrigued by the officer’s account of the experience itself, and what she was thinking and feeling at the time.

“The feedback we have been getting lately, especially with these stories involving law enforcement and a traumatic experience, has been positive,” Angeline commented. “Many have mentioned, ‘I was on the edge of my seat. I felt like I was right there!’ That tells me [our listeners] are sitting there right in the moment living it. I think that’s a good thing.” 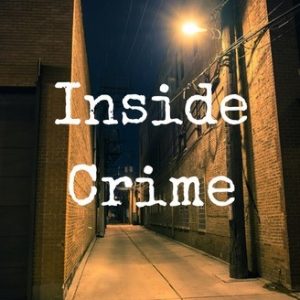 Angeline elaborated on the authenticity of Inside Crime. “I am a journalist at heart, through and through. That’s what I have been doing my entire life,” she said proudly. “Not all podcasts check out their sources or do their own research. Inside Crime is the real deal. There are a lot of conversations that happen before we even decide to cover a case. There’s vetting. There’s fact-checking. What we are giving our audience is real and genuine. And we get our guests to a place where they are speaking from the heart. We want the listener to get as close to the scene and scenario as they can.”

Sometimes, when a survivor speaks with Inside Crime, it is the first time he or she has decided to tell his/her story publicly. “I always want to make sure that the person we are talking to is ready,” Angeline stated. “I want to make sure it is what he wants to do, that he is comfortable, and that his heart is in it. We develop a relationship first with all of the people we talk to.”

Inside Crime certainly creates a forum where survivors are truly able to speak from the heart. In that regard, Angeline particularly remembers the episodes on the Alicia Kozakiewicz case. “Alicia was abducted when she was 13 years old after she met somebody online,” recalls Angeline. “This was a real-life nightmare, and she bravely tells her story about what happened and how she got out of it. These are stories that can be tough to listen to.”

Ironically, Angeline is the mother of a 13-year-old. “I’m still in denial about having a teenager,” she laughed. “It became very different covering stories once I became a mother. I remember law enforcement officers and firefighters saying that once you have a child, it changes your perspective. It’s harder to deal with crime scenes and accident sites [as a parent].”

Given that Angeline has been a crime reporter since 1996, I had to ask if having covered all those stories shapes the way she “parents” (if that is even a verb) as a mom. “Let’s just say that I am very aware of what can happen in the world,” she answered. “I try to talk to my son in an open way like an adult. Whether it is the stories I cover or the work I do with the National Center for Missing & Exploited Children, I just have those open conversations with him. That’s not to say there aren’t certain aspects I don’t share with him, but I am open on a number of subjects. I have talked to him about online enticement, for instance.”

The other obvious question, keeping Angeline’s 24 years as a reporter in mind, was “Why a podcast?” She explained that the idea for Inside Crime came to her a few years ago at Crime Con, one of the biggest true crime events for fans, speakers, newsmakers, and podcasters.

She was intrigued by having the ability to provide much deeper coverage of a story.

“There’s always more to a story,” she explained. “When I was doing local news, you get about 90 seconds to tell a story. But to get that 90 seconds, you have to talk to someone for a long time just for a couple soundbites. There’s a lot that doesn’t end up on the air. Having a podcast, I love that I can tell a story for 30 minutes or even three hours. There are no rules. We can do whatever we want.”

“Now that we have done three seasons, I’m enjoying it even more,” Angeline exclaimed. Probably not as much as the fans of Inside Crime, though. As a fan myself, based on the high quality of the first three seasons, I can’t wait for season four.

When asked what we can expect from the next season, Angeline shared, “More crime!”

A great scoop from an Emmy-award-winning reporter!