Looking back two decades, This Organized Life host Laurie Palau didn’t foresee having a thriving business and podcast—she just knew being organized was essential to her survival.

At that time, she was working off and on as an executive recruiter—pausing to have her daughters in 2000 and 2003—and her husband traveled extensively. She quickly realized the only way she could keep up with the ins and outs of daily life was to approach responsibilities in the same manner she did as a recruiter.

“I was basically a single mom with a paycheck,” Palau says. “I needed to run the house really strategically in order to get everything done, because everything pretty much fell on me. I had systems and strategies—whether it was a bedtime routine, a morning routine, a laundry routine, when I ran the dishwasher—I just started creating these habits, which turned into routines, so I could get stuff done.”

Palau has always been an organized person, not only with physical space, but also in time management and prioritizing duties and tasks. She started Simply B Organized in 2009 as a way to help others, primarily busy moms, and also to be home and present with her daughters.

After a few years working with clients, Palau found herself at a crossroads between continuing as she was or growing her business. She saw two ways to grow—build a team and have more people in the field organizing or diversifying her service offerings.

“Primarily, my business was a mix of blogging, speaking, and working one-on-one with clients. Then, in 2017, while I was in the process of writing my book, Hot Mess: A Practical Guide to Getting Organized, a friend said I should start a podcast,” says Palau. “I decided I’d just test the waters and see if this was something that resonates with people.” 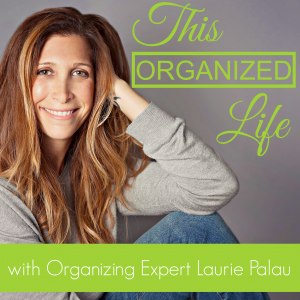 Thinking her husband and kids would be the only people to listen, Palau was shocked when her podcast took off. In fact, she didn’t even know what it meant when iTunes listed her podcast as “New and Noteworthy” after the first episode.

“I enjoyed the platform and connecting with people. There was a different relational connection. I was reaching people I wasn’t with strictly words on a blog.”

Also surprising were the audience demographics.

“What I didn’t anticipate was that other professional organizers would be listening to my show, and people who wanted tips and ideas for starting an organizing business. My pleasant surprise was that I was able to reach two separate audiences: the people who were struggling with organization in the home and the entrepreneurs who are in the space.”

Because of the show’s popularity with industry professionals, Palau started SBO Partner Program as a way to connect her audience with organizers in other geographic markets, allowing listeners to hire vetted organizers in their areas.

“By coaching and mentoring, it’s a way for me to build this community of professional organizers who can then feel less isolated. I give them strategies for running, growing, and scaling a business while serving other people.”

In the five years following her first episode airing, Palau has interviewed “heavy hitters” like Gretchen Rubin and the Dave Ramsey team. Her show averages about 35,000 downloads a month—and more than a million over its lifetime—across the entire catalog as listeners return to older episodes. However, she notes with a laugh that her adult daughters are not among her listeners, though she did make them subscribe.

Now starting the show’s sixth year, Palau says dropping an episode every Thursday is a lot of work, from producing it to getting guests, booking, and marketing. Even though she doesn’t do her own producing, she still has to generate new content that is relevant for her audience. In all, a team of four people—editor, producer, social media expert, and host—keep her show going.

Which is good news for her regular and future listeners who reach out and share the impact her show has had on their lives.

“It’s very humbling, for sure,” she says. “Just knowing the podcast has had an impact and that I’ve been able to teach, empower, inspire, or motivate people to feel like they can reclaim control in any area of their life where they felt out of control is just super humbling and rewarding.”

As her business and show evolve, Palau is working on another book, this one about clutter’s connection to Enneagram, a personality typology that looks at nine different core types based on unconscious motivation. Having always sought the reasons behind clutter, she is fascinated by Enneagram, because it looks at a person’s personality characteristics and why they do what they do.

“I’m just passionate about people enjoying their space, even though there’s chaos in our lives, homes, and families. I feel like our stuff has a tendency, if we let it, to control us or take control over what really is important. But at the end of the day, it’s just stuff.”