One of the best things about camping is the end-of-the-day fireside conversations—the perfect chance for deep and real conversations… and the occasional ghost story.

Ryan Bethea is capturing these conversations in his podcast, I Went Camping, and it’s truly unique.

“So it’s not technically camping. People always ask us, ‘Are you really camping though, or not?’ But that’s the point. We like deep conversations, and the best conversations always happen by a campfire. I thought, ‘Why not bring that to people and avoid all the reasons they don’t want to go camping? Get rid of those, and just get to the best part—a great conversation around the deep questions about life, and maybe some s’mores and a spooky story or two.’”

One of the cool things about I Went Camping is that the story behind the show takes place on a bus—an airport shuttle bus, to be exact.

Ryan’s friends have been pressuring him to do a podcast for years.

“And that could be just because they’re tired of listening to me talk all the time. They’re like, ‘Maybe if we gave you a microphone, that might actually solve that issue for us.’”

Ryan eventually took them up on the idea, combining conversations with camping—in other words, doing what he loves.

“I’m a big believer in going for it. If you can make money doing something you love, you should absolutely go for it. Not everyone gets to do it. But why not try? For me, I had to. And luckily, even if I give it my all and it doesn’t work out, I can go to bed at night going, ‘You know what? I tried, and it was so much fun!’”

Ryan doesn’t just “try”—even starting out, he wanted to go big. Thus, his idea for a mobile studio.

“Being in Southern California, traffic is a nightmare. So what if we removed all objections from a potential guest by bringing the studio straight to them? We built an awesome set totally influenced by Pirates of the Caribbean, which was my favorite ride as a kid. It was just the coolest thing! I loved it, and wanted to recreate it.” 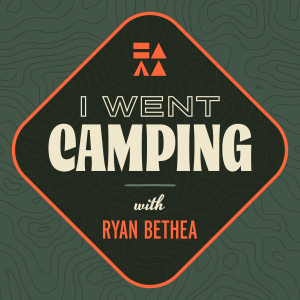 Ryan hired a team to design the concept, and the wheels were set in motion.

“We decided we’re gonna go out and build a podcast that brings campfire conversations right to the guests’ door, too. I am unaware of any other mobile campfire studio, so we’re really trying to dominate that category.”

Once the decision was made, Ryan had to find a bus. He researched and called on companies that sell old airport shuttle buses, bought one, and tore out the insides. Unfortunately, he did this just a week before the pandemic hit.

“So how’s that for timing? Then it turned into, ‘Hey, who wants to get in the back of an airport shuttle bus with a stranger during the middle of a pandemic?’ As you can imagine, no one! So we bought it and had to sit for seven to eight months while we figured out what we were going to do. Then, we retrofitted it—put in plexiglass, air sanitization, social distancing… we had to redo the entire thing to make it as COVID-safe as possible.

“But not everyone has an airport shuttle bus, you know. I mean, I’ve got all sorts of stuff now. So I can live in that thing, too, if things really got bad. I’m mobile, man.”

Once they put these protocols in place and deemed it safe to record, they needed a great producer.

“Mark Ryan who is the best kind of friend. He supports you… said, ‘I believe in you, and I’m willing to help out. I’m tying my future to yours.’ And I said, ‘Hey, how would you feel about just driving out across the country on spec? Let’s just go. Let’s take Nashville, and just see who we get. I know some people out there. Let’s just drive out there and see who agrees to an interview.’ And he’s like, ‘Let’s go!’ So we hopped in, drove across the country, and met all sorts of amazing people. It was a lot of fun.”

And that’s just the beginning.

What does Ryan see as the future of I Went Camping?

“I’ve got a few big guests internationally that I’m dying to go interview. I’m trying to figure out how to get Camping across the pond. My dream is to have a network of shuttle buses across the world that we can fly to, set up elaborate campsites, and go camping in Irish castles or in the Moroccan desert.”

One of the cool things about listening to the audio-only version is that Ryan and his team have made it an immersive experience.

“We actually include immersive sound designed to take you to the mountains with us—crackling fire, owls hooting, crickets. We want it to be a journey to a campsite—to make you feel like you are there, sitting around the fire with us. We find the ambient noise actually helps listeners enjoy it more.”

Even if you don’t like camping, you will enjoy this show. When you listen, you’ll hear how Ryan truly comes from the heart.

Lindsay Patterson Wants to Turn Your Kids on to Science