Meet Lindsay Patterson—founder, co-host, and producer of Tumble, a science podcast for kids. Lindsay believes we can make the world a better place by teaching children about science. To that end, she also strives to expand the reach of “kidcasting,” and change the way listeners interact with podcasts.

Lindsay didn’t “get” science as a child. She preferred engaging her curiosity and creativity with words. A creative writing major in college, she never imagined she would become an enthusiast for exploring the scientific method. That is, until she graduated, and had an opportunity to interview a scientist in order to write a script for a science show. That’s when her big aha! moment occurred:

“The moment we started talking, I realized that science wasn’t as I perceived it—you know, all written facts and books filled with things discovered. It is an active process of asking questions and finding answers. It is a way to solve problems that really concern me, and it’s instrumental in decision making. So that sort of hooked me into wanting to communicate the importance of the scientific process to kids. Science informs so many of the ways decisions get made (at least, it should!). And right now, science is not really being respected in that way. I think it’s so incredibly important to raise a generation that understands how science works, so they have the tools to understand and generate informed opinions, rather than just being told, ‘Oh, this is true,’ or ‘Don’t believe that,’ or be won over by anti-science views. This way, they learn how to make decisions for themselves.”

When the world of podcasting exploded in 2014, Lindsay saw her opportunity to produce and host a show specifically for kids.

Since Lindsay is in her “happy place” when she is interviewing scientists about their process of discovery, she builds the episodes around those interviews. Weaving in real-life stories from the scientists’ lives and work, Lindsay endeavors to show kids that science is an ongoing process undertaken by relatable people who are asking real questions about topics that matter. 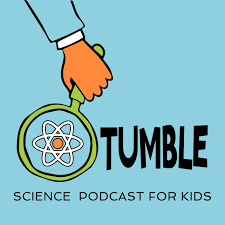 Lindsay’s husband, Marshall Escamilla, co-hosts the show. A music teacher who has taught kids from elementary age all the way through high school, Marshall writes original music for each episode. He also utilizes his teaching background to ensure the material is fun and interesting for the target age group.

“With Marshall co-hosting, I think we can turn any topic, no matter how complex, into something that is very accessible to kids. I really enjoy that aspect of the show and our format.”

From its first airing in 2015, Lindsay has been accomplishing her goal with Tumble. She often hears from teachers who use what she shares in her episodes as teaching materials. Lindsay once received an email from a grade-school teacher in Juneau, Alaska, who turned an episode on plastic pollution and microplastics into a week-long unit. Her class investigated the issue, and students designed their own clean-up devices. Then, they used up-cycled materials to build out their designs, and completed experiments in a kiddie pool to test them. They then contacted Lindsay, who arranged a Skype call with the featured scientist of that episode. Since then, other teachers have corresponded with Lindsay, too, and Tumble has even developed teacher resources for some of their episodes.

Some of the subjects Lindsay and Marshall explore come from young listeners, too, who subscribe and submit questions. For example, when a child wrote in asking why animals have whiskers, The Science of Whiskers (4/5/19) episode was born. It was so creative and engaging, it won a 2019 AAAS Kavli Science Journalism Award, Gold prize. Another 2019 episode, The Cave of the Underground Astronauts (1/11/19), did the same. In that episode, three women archeologists Skype from a remote cave in South Africa to share their process as they excavate the bones of early human relatives. Recently, a student wrote to Lindsay to describe how she recreated the tunnels and pathways of that cave.

The reach of this particular podcast goes far beyond a first listen by a class of students. Children go home, excitedly sharing what occurred in the episode, and families join them for a second listen. Plus, children often enjoy listening to the same things over and over, as they learn differently than adults. This then generates ideas for future projects, inquiries, and sharing.

The podcast is going strong, with upwards of 109 episodes released and over 4M downloads to date. In 2016, Tumble was named “one of the best podcasts for kids” by Apple Podcasts. It has topped over one-and-a-half million downloads in 2017, and in 2018, it was picked up for distribution by PRX, the company behind the Radiotopia podcast network. It is now also partnered with GenZ, the Peabody Award-winning children’s podcast production company!

When Lindsay isn’t working on her Tumble-ing, she is a passionate advocate for children’s podcasts. She both co-founded and co-chaired kidslisten.org, a non-profit organization of advocates for high-quality audio content for children, setting standards and best practices for the genre. And no wonder—she also has two young children, podcast listeners, to think about!

When it comes to her own listening, Lindsay says, “I really like things that take my mind off what I am supposed to be doing. I am a big fan of audio fiction, and I listen to The Daily. That’s my ‘diet.’ If I wasn’t doing a science podcast, I’d love to do audio fiction.”

Tumble, the Science Podcast for Kids, can be accessed on Apple Podcasts, Google Play, and Spotify. Learn more here: www.Tumble.com.