The Wonders of the World podcast is not just a history podcast. It is that, of course, but also so much more. When host Caroline Vahrenkamp takes you to visit the wonder in question, she doesn’t just tell you about the history of the place—she also describes the architecture and weaves stories into the buildings she describes. And to really share the flavor of it, she even provides you a recipe to cook at home in each episode.*

Caroline has been wondering about the wonders ever since her parents took her to the Grand Canyon when she was 16 years old. She decided then that she wanted to see more, so she started compiling a list of dream destinations.

A few years ago, she got into history podcasts, and being a natural storyteller, friends encouraged her to start one of her own. She already knew exactly what it would be about: The Wonders of the World.

Of the 200 wonders she selected to feature on the show, she has covered 92 so far, so she is about halfway through. The wonders are divided into categories—some are obvious and pretty much prescribed, like the traditional Seven Wonders of the World. Others, like The Seven Wonders of Islamic Architecture and The Seven Wonders of the Industrial Age, she invented herself. She also doesn’t always stick to seven… the natural wonders come in groups of ten.

The podcast is basically chronological and divided into seasons that break at key moments in history–for example, when it started back in November 2016, we were at The Great Pyramid of Khufu. Next, Columbus’s arrival in the Americas is chronicled. Finally, the podcast will come full circle by ending in the brand-new Grand Egyptian Museum.

Each episode follows a structure that has been defined over time. They all open with a quote from a pop song that Caroline reads in a deadpan voice, which generally makes it sound hilarious. She then goes into the history of the place; she’ll often focus on one specific piece of history rather than attempting a more general overview. So, for example, in the episode on “The Tower of London,” she decided to eschew the building of it by William the Conqueror as well as the beheadings of Henry VIII’s various wives. Instead, to chime with the podcasting zeitgeist, she poses a question to listeners about one of the great unsolved true crimes of history: what happened to those princes in the tower?

She’ll then describe the place itself, and this is where she really makes things come alive—the listener feels that he or she is walking amongst the ancient monuments. After that, she gives details about how to visit today, including some practical travel advice. Then, finally, she rounds off with a recipe. 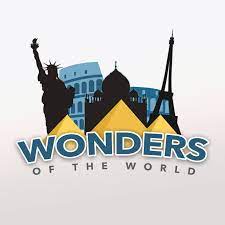 “I’ve always felt that food is a great insight into a culture. Understand their food, what they eat, how they eat… their levels of spice or savory or sweet or umami or whatever… and it just gives you a more complete understanding of these places.”

Over time, Caroline has incorporated guests into her podcast, initially starting with friends who might have visited the places she features while on vacation. Then, she began inviting other podcasters, like Bry from Pontifacts, Dominic from The History of Egypt, and Robin from The History of Byzantium, each of whom were able to give extensive historical background.

Caroline, as one might expect, is a seasoned traveler who has visited 52 of the wonders she plans to cover. She mentions the Alhambra, Teotihuacan, and Macchu Picchu (mostly for the llamas) as among her favorite places visited so far. On the list of places yet to go is Greece, home to seven wonders on her list. This is one she really feels she has missed out on so far.

Interestingly, when Caroline launched the podcast, she did so under a different name and gender. She admits this caused her worry about being something of an impostor, saying, “I get a lot of impostor syndrome, because some of these other women podcasters have been doing it that way the whole time and had to build an audience from scratch. In a way, I had it easier.”

It is fascinating to hear about Caroline’s transition as it pertains to her current experience as a female history podcaster versus her previous experience in this heavily male-dominated category. Caroline has noticed that her listener and Patreon numbers have dropped slightly since she transitioned; however, her ratings have not, which is heartening. She has also noticed an increase in what she calls “Well, actually…” messages, sent by men who cannot avoid the dreaded mansplaining after deciding that Caroline would benefit from their vast knowledge (hint: she doesn’t!).

In essence, though, the podcast has not changed much since Caroline transitioned. “I don’t think my perspective on gender has changed. I made an effort to include women’s voices and history from the beginning, so that hasn’t really changed at all. But I do feel like there’s less engagement now than there was.”

Caroline names a number of women history podcasters—including Bry and Fry from Pontifacts, profiled in last month’s Podcast Magazine® issue, and Diana from Land of Desire, this month’s Under the Radar feature—as “inspirational to me even before I realized why.”

From a listener’s point of view, one of the greatest benefits of the Wonders of the World podcast is that, unlike other strictly chronological history podcasts, people can jump in anywhere. Rather than worrying about missing something, you can try an episode that takes your fancy, or that covers a place you’ve already visited.

So, whether you have honeymooned in the Alhambra, have a fascination with the ancient world, or enjoy trying recipes from far-flung places, you will find an episode for you… and once you have started, you might well find yourself hooked for good.

*As part of Podcast Magazine’s rigorous approach to research, your intrepid reporter felt the need to try out one of the recipes Caroline provides… one that looked manageable, of course. Cacio e Pepe from Italy—an apparently simple pasta dish of pepper and cheese—reported here as absolutely delicious!

Getting The Goods on Goodpods