“I always knew there was a secret, what I didn’t know, the secret was me.” – Dani Shapiro, Inheritance

Just about everyone in the world has a skeleton or (several) in his or her closet.

Secrets… some buried so deep within, they may never see the light of day. Those who keep them sometimes end up doubting their own mind and feelings, believing instead that the secrets are truth.

The truth is, secrets have a way of increasing in weight, the longer they are kept.

Dani Shapiro, host of the Family Secrets podcast, is no stranger to them. “After a lifetime of writing about family secrets, I’ve never understood why… over the course of nine other books, novels, and memoirs… I have always gravitated toward and drifted back to the subject of secrets and families—and what happens to families when there’s a secret buried within.”

One of the more shocking secrets in Dani’s own life that she uncovered—and that changed everything—resulted from a DNA test Dani’s husband suggested they take together. Discovering that the man she had called “dad” her whole life really wasn’t her biological father was devastating, and it led Dani on a journey toward the truth. She chronicled that journey in her New York Times bestseller, “Inheritance.”

Despite being a podcast listener, it wasn’t until Dani had a conversation with her dear friend, mindfulness author Sylvia Boorstein, that the inspiration for one came to her. Recalling, Dani said, “Sylvia and I had this long phone call, and at some point, she started telling me her own family secret. I was on the other end of the phone thinking, ‘I wish I could record this!’ I remember wanting to share it, because it’s such a great story, and Sylvia is such a great storyteller. When I got off the phone, I wondered if a podcast about family secrets exists.”

Intrigued, Dani quickly scheduled a meeting with two representatives of her publisher, Penguin Random House. “I barely even got ‘I’ve been thinking about this idea for a podcast about family secrets’ out before each of them, in slow motion, reached into their bags and pulled out their phones. I could see how excited they were. Within a few days, they had set up a meeting with a company based in Atlanta called HowStuffWorks.”

And just like that, the podcast Family Secrets was born!

The challenge: Dani had always considered herself a writer, so podcasting would be a new skill to learn. “It was a lesson in following my instincts—because I really felt compelled to do it.” 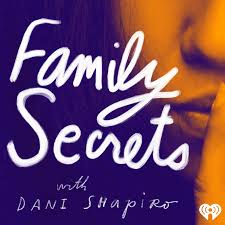 Produced by IHeart Radio, Family Secrets is now in its third season of sharing secrets of all kinds, from all kinds—celebrities and listeners alike. With a soothing, empathetic voice, Dani guides her guests through stories that recount the often traumatic and heartbreaking secrets that have had an impact, often striking a note of truth and healing for listeners.

Coupled with “soundscaping,” listeners feel drawn in, part of the conversation taking place in front of a fireplace over a warm cup of tea, against a ‘backdrop’ of birds singing, doors closing, church bells ringing, etc.

Dani gives high praise to her sound engineer, Dylan Fagan, for creating “a gentle musical envelope for holding the story and having the right ambience for it to be heard and felt by the listener.”

Featuring guests who have been through “the dark night of the soul,” Dani looks for those who “have deeply explored the aftermath and the impact, both psychologically and emotionally, of having had a secret kept from them or having kept a secret.”

And there’s no “winging it,” here.

“I go into every interview with a ‘map’ of the conversation in mind. I usually begin and end with the same questions. I start by asking about the landscape of my guest’s childhood. That generates answers in amazing detail, and it lays the groundwork for the person’s story. And at the end of every episode, I always ask my guest, ‘Do you wish you hadn’t found out?’ Not a single one has answered, ‘Yes, I wish I hadn’t known.’ Not one.”

Dani also believes that there is a universal theme she’s sharing.

“We really are more alike than we are different. That’s why Family Secrets is resonating as much as it is… because every family has secrets. If I were to identify one underlying theme throughout almost all of the stories I’ve heard and conversations I’ve had, I’d say it’s that ‘Where there is secrecy, there’s shame.’ We all have it, and it’s useless and futile.”

As Dani shares the secrets that cause that “useless” shame, she also builds a community of people who were ultimately liberated by the discovery of their secret, like she was.

“It was such a painful and world-rocking discovery,” she admitted, “but it also provided me with my sense of solidity about who I am. I didn’t know that I was missing something as bedrock as identity. But once that became clear to me, the lights blinked on. It was like I was wearing the right prescription glasses for the first time in my life! I think my guests share that feeling. So many people come up to me to tell me they listen to Family Secrets, or have read Inheritance, and feel less alone in the world. That’s an amazing feeling.”

Ali Levine: Stripped down to be of Service

Alison Levine, familiarly known as “Ali,” believes we are all here in service of one another.

Stories have the power to help children discover their creativity and curiosity, and the Dorktales

A podcast for military members, veterans, and first responders focused on fitness, health, nutrition, and

Michael Ashford: A Man on A Mission

Michael Ashford is gifting the world inspiring stories on his Fit Dad Fitness Podcast. “I want

Our Fake History is one of the most enjoyable history podcasts out there. The presenter,