Jeff Belanger lives a life of adventure. Not only has he has climbed Mt. Kilimanjaro and Machu Picchu, but his professional life revolves around ghosts and legends.

He had his first personal encounter with a ghost in Paris, and since then, has authored a dozen books about the paranormal. He is also a researcher for the Travel Channel’s Ghost Adventures (14 years) and Paranormal Challenge and Aftershocks, and for Amish Haunting on Destination America.

In 2009, Tony Dunne, a PBS producer, was working on his documentary, Things That Go Bump in the Night: Tales of Haunted New England. Jeff and Tony met during the filming, and they quickly realized that they shared an interest in legends. Coincidently, they also discovered that they were born in the same city, at the same hospital, just one year apart. They kept in contact over the next three years, and then, Jeff was inspired to ask Tony if he would be interested in starting a new television series exploring New England legends.

New England Legends began airing in 2013, and by early 2014, “The Spooky Berkshires” episode was nominated for a Boston/New England Emmy in the Magazine Program/Special category.

In terms of creativity, they were both happy with the show, but they also felt that there might be more.

Jeff shares, “TV production takes a long time. And it’s expensive and so labor-intensive. Tony and I were always complaining—it was like, ‘Man, I wish we could do hundreds of these stories.’”

Jeff had been a guest on numerous radio shows and podcasts, and a seed was beginning to germinate. He recalls, “I’ve always been interested in podcasting, and I thought the podcast medium would remove many of the limitations of television, filming permits, and insurance crews, including incredible associated costs and things like that. And we could get the stories out there more regularly.”

So, Jeff began considering who he might want to co-host the podcast with him, and radio personality Ray Auger came to mind. Jeff had been a guest on Ray’s show a few times, and they had become friendly.

Jeff, who jokes that he “bought enough beers to get Ray to say ‘yes,’” explained his vision to Ray:

“The episodes will be short and concise. We’re not going to go on and on, like, ‘Hey, man, how was your weekend?’ They will be scripted and succinct stories.”

Ray thought it was a fantastic idea, and they agreed to give it a try. The first episode of the New England Legends podcast—which has been voted number two on Podcast Magazine’s Top 50 Dads in Podcasting listicle this year—debuted in 2017, and they are proud of the fact that they haven’t missed a single week since its inception (that’s 247 weeks and counting, for those who are curious). 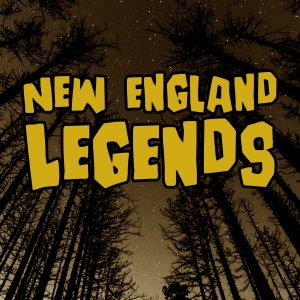 Ray’s interest in joining the podcast stems from personal experience. “I grew up in New England,” he shares, “which means I grew up with the history. My family traveled throughout the region and learned about different legends, like Bigfoot, which can be a northeastern phenomenon. I think I’ve always been fascinated by these stories. And beyond New England, there’s the Loch Ness monster, and all those fun legends and stories about ghosts, goblins, and vampires. I’ve always been a fan of horror, and I do believe in the supernatural. Meeting Jeff wasn’t just by luck. I think it was fate. By inviting me to join the podcast, he gave me an opportunity to explore my love of the unknown a bit more.”

Prior to meeting Jeff, Ray had a paranormal experience in Portsmouth, New Hampshire. He recalls, “I had a morning show in Portsmouth with two other people. We spent a night locked in at the Portsmouth Music Hall on Halloween Eve. We would record a little bit, asking a question, and then we’d wait for an answer from a ghost. We actually caught an EVP [electronic voice phenomenon] on tape. It was really exciting. So yes, I’ve always been a fan, but a very amateur fan.”

Jeff’s interest in the paranormal also began at a young age. He remembers, “I was born in Massachusetts, but mainly grew up in Sandy Hook, Connecticut. I had friends from a young age who said their homes were haunted. One lived in a house that was built in 1760. One day, in a very matter-of-fact manner, he said, ‘My house is haunted, but don’t tell your parents.’ I thought that was amazing! I also grew up in the town next to Ed and Lorraine Warren, who’ve been featured in all the Conjuring movies. I knew them since I was 13. I’d been to the museum, and I would watch their presentations around Halloween.”

While Jeff is proud of all his accomplishments, the podcast is top of his list and brings him endless excitement. “People pay me to go look for ghosts and monsters all over the world. And that’s so great! But New England Legends is ours. We answer to nobody except each other and our audience. It’s so liberating. We don’t need to worry about focus groups. It’s our creative work, and it’s just so satisfying.”

Jeff says their podcast works as well as it does largely in part because of the structure and the way they have chosen to record their episodes. “I write most of the episodes and craft how they will go. I try to think about them as a visual documentary. I knew right from the get-go that we would use voice actors. If we get an old quote from a newspaper from 1880, for example, we’re not just going to read it. We’ll have a voice actor and add sound effects to really bring people into the story.

“The podcast medium is so intimate—it’s just you and your listeners, in their earphones, in their cars, wherever they’re listening. And Ray isn’t just a radio guy; he’s also a sound engineer. He knows this stuff inside and out. I don’t. And so very naturally, the two roles were obvious. I always defer to Ray on the audio, and he defers to me on the story. As he explained earlier, he’s newer to this, so he also represents the audience, asking questions they’d likely ask, too. I’m more of a guide.”

Ray proudly adds, “We did win the Sound Bites Award in November from the Massachusetts Broadcasters Association, which was pretty awesome. I know that Jeff respects my role, and I respect his. I only wrote one episode, which I’m very proud of, but by the end of it, it was very clear that Jeff is the writer.

“Neither of us overstep. It’s important to have roles, I think. We don’t want to blur the lines, because that can cause inconsistencies. Jeff’s specific method of writing is why people have fallen in love with this podcast. He’s also known as being the expert in the unknown. People know him, have bought his books, and watched the show on Amazon. What we both bring together is the personality. And I think that is hard to find in a podcast. I’m not trying to toot our own horns, here, but we are somewhat voice actors ourselves, reading Jeff’s script. We act. If a story is set in Connecticut in 1822, and there’s a vampire chasing us, we are completely in that moment, and it makes a big difference.”

To add even more fun into the mix for their fans, Jeff and Ray have a complementary app for their show. “There’s literally a pin for every episode we’ve done,” Jeff explains. “You click on the pin, and not only can you hear the story, but you can also get driving directions. These stories don’t just connect us with our history and our communities. They connect us with each other when we share them. And that’s the best part. The app allows listeners to become part of the story with us. If you want, you can just listen, but you can also get in your car and go visit the very places we’re talking about. We also have a Facebook group you can join and share your own stories. It’s all part of celebrating the weirdness that makes New England like no other region.”

With over four million downloads and counting, the future looks bright for the hosts of this impressive podcast.