The Diary of an Empath podcast is perfect for anyone who is on a journey of growth. Creator and host Keresse Thompson is much more than a licensed clinical social worker. She is an intuitive empath who is also a professional tarot reader.

In addition to working in the Veterans’ Affairs (VA) system for a while, Keresse has been interested in mental health for a long time. “I’ve been intrigued with people’s energy for many years now. I wanted to help others and reach more people in the community, because not everybody can afford therapy or readings.”

On the podcast, Keresse is open about her own experiences and goes beyond a clinical perspective on important personal development topics, ranging from dating to life purpose and spirituality. “I come from a place of sharing what I’ve been through, what has helped me, and the struggles I’m still going through.”

Knowing which content will make a difference in her listeners’ lives is relatively straightforward for this host. She has asked her listeners to suggest the topics they want to learn more about through the podcast.

When she finds a guest who will bring value to the show, she also rolls with it. “I don’t want to bring someone on just because they have a million followers. There must be added value for me and my audience.

“Many people want to know that they’re validated. Sometimes, when we’re going through stuff, we’re the main actor in our story, and we might think that we’re the only ones experiencing challenges. But many of us deal with similar issues.”

At age 20, Keresse was in the Marine Corps, and she discovered a lot about herself. “The military is very stringent and rule-based. I was in tune with other people, and I had a hard time being quiet when I saw injustices. 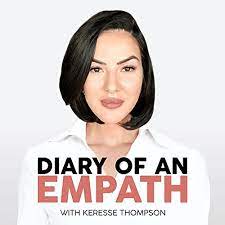 “Throughout my young adulthood, I found myself not just understanding people, but actually feeling what they were feeling. I didn’t quite understand what was going on with me. I just knew I felt very overwhelmed, anxious, and emotional. It felt almost like a curse.”

When Keresse learned what an empath is, she started to view it as a gift, recognizing that empaths simply need tools to navigate their emotions.

“Sometimes, as an empath, you can walk into a room where a negative incident may have occurred, and something doesn’t feel right. You might meet someone you don’t really know and think to yourself, ‘I feel weird vibes from that person.’ You’re picking up on their lower vibrations, because as empaths, we’re very in tune with the people and energy around us… not only on a spiritual level, but sometimes, because of our childhood.”

Keresse asserts that we may become highly sensitive as a result of the ways in which we were treated by our parents or due to trauma while we were growing up. “We might be intensely tuned in to body language and the tones people use when they speak to us, because we were very tuned in to that as children, as a result of our parents’ behavior toward us. Even within the mental health community, we recognize that there are highly sensitive individuals who pick up on people’s energy.”

For anyone who seeks more balance and an easier time navigating life, there is hope. Keresse said, “As I have learned to trust my intuition and abilities, I’ve become better with people and situations. I’ve also learned to recognize when self-care needs to be a priority.”

The feedback from listeners confirms that some individuals who are empaths, or highly sensitive, have never even heard those terms before and are grateful for this podcaster’s ability to help it all make sense, so they can move forward.

“They have an opportunity to understand that there’s nothing wrong with them. They accept themselves for who they are and realize that they simply need coping strategies for various situations,” Keresse added.

She pointed out that when it comes to romantic relationships, the fact that empaths are sensitive may lead them to attract narcissists. Although in her case, she picks up on narcissistic energy right away.

“I think empaths’ tendency to attract broken people may lead many of us to believe that something’s wrong with us, or we’re broken. This podcast aims to help people see that isn’t the case. As compassionate healers, we may have a tendency to want to help others, and we see the good in everyone, so we might stick around a little longer than the average person.”

Keresse advised, “We’re in a generation full of distractions and instant gratification. It is vitally important to take the time to regain some self-insight, learn about yourself, and figure out what you can do to be a better human being. We’re only here for a short time, and I think we forget to be human sometimes.

“Whether you’re an empath or not, life can be unpredictable and messy. This podcast is here to help you become a better version of you. There’s value in the podcast for everyone, regardless of your age or gender.”

Knowing that you’re not alone can be quite comforting, and the Diary of an Empath podcast keeps people connected and validated through experiences we may not have otherwise known are also shared by others.