Has a three-year-old ever repeatedly asked you “But why?”

“I don’t know how she doesn’t get tired of asking that question,” a dad once confided in me in utter amazement.

The producers of But Why: A Podcast For Curious Kids understand that children have an insatiable appetite for figuring out the world around them. And they want their parents and other adults to help them explore everything that fascinates them.

Jane Lindholm and Melody Bodette have joined forces to satisfy kids’ curiosity by providing answers to the vast array of questions they ask.

“I was looking for a new creative outlet, in addition to the news show I was hosting,” Jane explained. “I had a friend whose small child innocently piped up from the backseat to ask, ‘What’s a Colombian prostitute?’ The term had been mentioned in a news item on the radio. That got me thinking about the possibility of having an NPR show for kids, so parents don’t pull out their hair and kids have something to listen to that’s educational and informative, in the same way that adults like to listen to public radio. That’s how But Why was born, and right from the start, Melody said, ‘I want in. I’ll produce it.’”

Melody outlined the reason for her immediate interest. “I had experienced the same kids-in-the-car news problem for so long. I used to wonder ‘What can we listen to?’ At the time, my daughter was six years old, and it felt like a good time to jump in and ensure there would be a show I could share with my kids and others in their age group.”

Jane added, “Maybe because kids’ podcasting was really unsaturated at the time, kids and families found it right away, and it grew organically really fast.”

They have faced only two challenges. For starters, they were trying to produce an exceptionally good show with serious time and resource limitations.

The good news is that Jane and Melody have now moved into working practically full-time on the podcast, allowing them to have a singular focus.

Jane reflected on their journey with But Why: “When our station said ‘yes’ to us doing the show, we didn’t know it would blow up into something this big. Now, we can devote more time and resources to it and build a better website.”

“Working mostly full-time on the podcast will help to make the show tighter and better, and we’ll be able to do more timely topics, if kids want us to,” she added. “It’s been amazing. I thought we would plateau, but we haven’t. We still see a lot of growth, which is really great.” 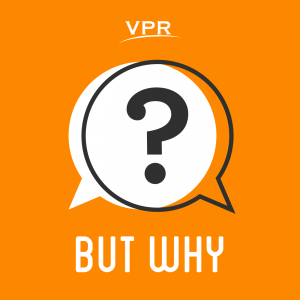 Jane described the other challenge: “Learning the right balance of how to talk to kids in a way that keeps them engaged and interested is not always easy. We never want to talk down to them, so it’s a matter of gauging the right way to approach the vocabulary.”

“I think we distinguish ourselves from the rest of the field by having high production quality, but we don’t have a lot of bells and whistles. Some kids really like the high-energy podcasts, and some don’t. The ones who like to be talked to in a calm way will probably gravitate toward our show,” Jane observed.

Melody noted that kids have sent them questions from 60 countries, even from as far afield as Iran.

The But Why podcast is directed by whatever children want to know. Parents are encouraged to record their kids’ questions, and Jane and Melody typically enlist the help of experts to find the answers.

Jane said, “We are so grateful to the families that trust us to talk to their kids. One of the main goals for the show is that we want to be a trusted voice. We also want kids to know that they can freely ask questions about things that confuse or worry them. They do send us some really challenging ones, and it’s been very gratifying for us to feel like we can help them grow up feeling supported and encouraged.”

On the website, parents and teachers will now find downloadable episode transcripts and But Why Learning Guides, which complement the newest episodes.

Proving that learning can be fun, the But Why team even asked Vermont artists to illustrate some of their favorite episodes and create printable coloring pages, so children can color along while listening to the show.

And the fun doesn’t end there! Fans can subscribe to the But Why newsletter and follow the podcast on Facebook for news and a look behind the scenes.

A major publishing house has also reached out to this enterprising duo. Jane brought us up to speed: “We are launching a book series this year, and the first books, on farm animals and oceans, are expected to be released in the fall.”

As the podcast description says, “It’s a big, interesting world out there.” When you tune into But Why, who knows what you’ll learn about. You may stumble upon an out-of-this-world topic like the rover robot’s mission to Mars, as explained by a NASA program scientist. On the other hand, the topic of an episode may be a sweet one, like how chocolate is made. The possibilities are endless because, after all, kids ask “But why?” about any and everything.

Take a listen with your kids. You’ll be amazed at how much you’ll both learn.