The first thing you notice about Mark Brickey—host of the Adventures In Design podcast—is the grittiness of his voice… the distinct, unmistakable sound of a guy in the trenches working his craft.

That he gives you the unvarnished, authentic version of who he is and what he stands for, or nothing at all.

Mark is a no-BS kind of guy who won’t compromise on the standards he sets for his podcast—a daily talk show for creatives by a creative—or the way he serves his listeners.

A former top-tier illustrator for clients like Disneyland and high-level people in the music industry, it was in 2011 that Mark entered the world of podcasting.

He had been discussing with a friend how, when designers, artists, and high-level professionals get together, they often have conversations that the printed media portray with an entirely different narrative. Theirs tend to be more academic—more polished—than the raw conversations people really have.

Mark and his co-host at the time, Billy Bauman, released their first episode in the beginning of 2012, and it blew the doors right off the barn. People weren’t used to hearing their fellow creative professionals go deep into the minutiae, celebrating the highs of highs and discussing the lows of lows in a completely brutal, honest, and direct manner. 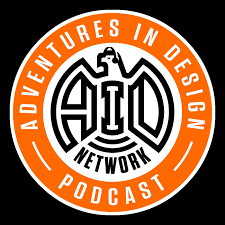 “It was refreshing, because a lot of people have been spoon-fed a lot of lies. That it is easy; it is rewarding. And if you just work hard, everything will go your way. That’s bullsh*t. Everything’s not gumdrops and rainbows. There’s a lot of work, a lot of obstacles. We made a lot of people feel much better about themselves. They were broken, too. They weren’t perfect, and neither were we. And together, we’re going to try to figure it out. That was the way that it started. I had such a different beat on podcasting, and everybody else was doing something so different. I ignored the medium and just kept going in my own lane, because I was seeing tremendous success—a tremendous reaction,” Mark said.

Mark features guests who have designed happiness into their creative professional lives, having turned their daydream into their day job. Whether an artist, designer, freelancer, filmmaker, someone working in film or running a network in Los Angeles, his guests live their passion.

Two years after launching Adventures In Design, Mark decided to design his life after his own happiness, too, and made podcasting his full-time job.

With no intention of ever going completely mainstream and trying to attract every listener possible, Mark’s audience consists of a wide variety of listeners. Many are freelancers, designers, general contractors who run businesses, and tradesmen like electricians. But the show’s reach is even wider. Spouses of creatives often listen in, as well, to hear the stories of struggle and perseverance. There’s also a large portion of listeners who are no longer in a specific trade, but who have already gone on the journey, and realize the conversations are actually much more about the human experience.

“In my generation, many of us who have chosen to live in top-tier cities won’t be able to buy a home. We’re freelancers, so retirement is sketchy at best. A lot of the American Dream is sort of eroded. We won’t have what our parents were promised, and what our grandparents got, in our jobs and identities. My old man was a truck driver, but he didn’t identify as a truck driver. He was a dad. He was a guy who drove a truck for a living. For many of us, we are our professions. It’s the first thing you say when you go to a party and you meet somebody. So, the idea of making people feel better about themselves through their profession is really a new thing to our generation. And I think I’ve tapped into a tremendous amount of success in allowing people to sort of get into the psyche of who they are as people AND who they are as professionals. So therefore, it’s kind of gotten a little bit bigger than where it started, which is what you want from any project you’ve made into your life’s mission,” Mark shared.

With over 1100 episodes and a fan base he serves with exclusive paid content in his Circle Of Trust, Mark monetized the show via a paid subscription model in 2014. This was revolutionary for a podcast at that time—even more so for him to say, “Hey, give me money, and I can create for you.”

The bargain he made with his audience:

“If you see value and you pay for the podcast, then I essentially quit my job doing what you do, and I become your co-worker. And I work endlessly to bring you conversations, insight, entertainment, good laughs, and company while you work.”

Mark not only brings his unique life experience and authentic grit as an aggressive entrepreneur who “comes from shit” to the show; he’s also interviewed hundreds of top-level creatives, and shares with his listeners the through lines to success as they take their own adventures in design.