As a teenager, Museum Confidential host Jeff Martin dreamed of being a writer like Jack Kerouac or Hunter S. Thompson. He was hungry, eager, and impatient. So, he skipped the perceived tedium of college life and plunged directly into his passion—writing.

“Sometimes, you’re so eager to just get out and do things,” Martin says. “Some people need that path, and some don’t—it just depends on the individual. I’ve always had a lot of ambition, but I’ve also been very open to what the next thing will be. I’ve followed each opportunity as it’s presented itself to me.”

One of those opportunities surfaced in 2009 when he was in his late 20s. Wanting to create a literary scene in Tulsa, Oklahoma, Martin started a citywide reading initiative called “Booksmart Tulsa.”

“I was bringing in authors and hosting social events around town to engage younger people,” he says. “We were rotating events at different places around town that were fun and interesting, and one of the first was at the Philbrook Museum of Art.”

While planning the event, Martin became friendly with the museum director, Rand Suffolk, who is now the director of the High Museum of Art in Atlanta. “He liked what I was doing—I was a young go-getter trying to do all kinds of interesting things at that time.”

That relationship presented Martin with another opportunity that has directed the rest of his career—but he didn’t see that possibility when Suffolk’s secretary called his cell phone during a basketball game with friends.

“I thought we were going to do a follow-up and maybe look at doing more book events,” explains Martin, who popped by Suffolk’s office after the game—sweaty and shorts-clad—thinking they were just going to chat. “He basically offered me a job on the spot. He said, ‘I like what you’re doing. I want you to take some of that energy and bring it here.’ It was a total fluke.”

Martin had never worked in the museum field—nor visited many growing up—but he did have experience in communications and an interest in social media and the new media space. “I fell into the museum world pretty fast and loved it right away,” he says.

In the 13 years since, Martin has advanced from online communities’ manager to director of communications and been instrumental in expanding the museum’s reach and offerings, like an exhibition about the inner workings of a museum. 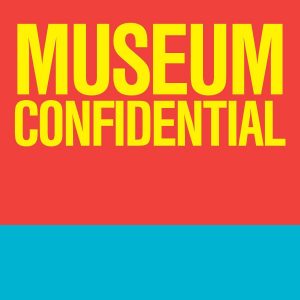 “We had an idea for an exhibition called ‘Museum Confidential,’ based on the idea that most people don’t know how exhibitions come together,” he says. “People really love seeing how things work behind the curtain. So, we pulled that curtain back.”

While his team had been talking about creating a podcast, the opportunity didn’t present itself until that exhibit came to fruition. The idea was for a limited-series podcast based on the content of the exhibit. Once they finished the series, though, Martin didn’t want the podcast to die. To keep it going, he asked Public Radio Tulsa (NPR) to continue partnering with the museum.

“The response was so great from that first season that even though the exhibition closed, and we didn’t have a specific focus, we decided it is something that could carry on,” he says. “After that first season, the show changed a bit. We spent the whole first season with a navel-gazing internal look and knew the show would only work if we turned our gaze outward.”

Martin co-created the Museum Confidential podcast with Public Radio Tulsa producer Scott Gregory, who does the editing and production at studios on the University of Tulsa campus. “I come up with the content, write the content, do the interviews, and creatively direct the show, and then I give Scott all the raw materials, and he makes it into a show,” Martin explains.

“I wanted this to be a podcast for people who like museums and visit museums, but also take some of the misconceived ideas about museums and spin them on their heads a little bit—make people think differently about them.”

While some episodes have been lighter, like those on the Crochet Museum or Museum of Bad Art, Martin also delves into more serious issues, like unions and race. “Having that balance has become very important to us,” he adds. “We’ve just been thrilled that people responded and actually want to listen to the show.”

With more than 100,000 podcast subscribers, Martin said an accurate audience count is difficult, because the episodes are also broadcast over the airwaves, as well as through Public Radio Tulsa’s website and app.

“We’re able to reach people internationally through these tools that we wouldn’t be able to otherwise,” he adds about the partnership. “We have a lot of people who listen to our show who are not in our area, so anytime it airs on the radio locally, people are often hearing it for the first time. We always try to introduce ourselves again to the local audience, though.”

A tourist spot, Philbrook Museum of Art has become even more popular through the years because of outreach tools like the podcast. He says the more episodes they have, the more success they have, and the more listeners, the bigger the guests they’re able to feature.

“All these different technologies for communication have helped us show people the museum and give ourselves a voice,” Martin says. “There are people who follow us on social media who have never been here, but they just love what we do. We have a relationship with them, and someday, they might come here.”

Just like all the opportunities before, when Martin had a chance to take Museum Confidential on the road for live shows, he took it.

“It’s always fun to go and have people come out and say they listen to the show or that they’re fans,” he says. “This has become something I truly love and have a passion for.”