Back in 2005, the fledgling radio network Voice America approached Debbie Millman expressing interest in her hosting a show. At first, she thought they were offering her a job. Turns out the opportunity was for her to pay them to produce a podcast.

“At the time, I was experiencing what I felt was a creative death. For a decade, I had put all my energy into building a business. And over time, I had slowly let go of all the ‘side projects’ I engaged in to nourish my soul. It was the first time in my life that I had been successful in anything. Because that was such a new and intoxicating feeling, I essentially abandoned everything else, and put everything I had into my work. I felt my creative soul slowly dying. When this opportunity came up to do an Internet radio show, I thought, ‘Oh, this could be a fun, creative thing.’”

A complete vanity project, Design Matters was launched on February 4, 2005.

They broadcasted live at 3:00 pm Eastern from Debbie’s office in the Empire State Building, New York, following the format of a typical radio show complete with live callers and advertising. At the time, she was also writing for the world’s first-ever design blog, and one of her friends in that project suggested uploading the digital files from the radio show to iTunes. That way, it would give people more opportunity to listen whenever they wanted instead of having to tune in when the radio show was live.

“The idea to do the show essentially came from Voice America. I created the topic and the name. The idea to upload it to iTunes came from my friend Bryony Gomez-Palacio. I started uploading in June, and the show became one of the first ‘podcasts.’ If you look on Wikipedia, they have lists of podcast launch dates, and there I am, in 2005. It’s also one of the few still broadcasting.” 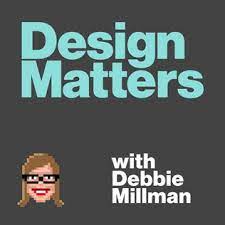 Pre-pandemic, Debbie was doing all of her shows live in front of the student audience at the School of Visual Arts, where she took on a second job in 2009, planning and developing the first-ever graduate program in branding. The show became a big part of recruitment, because people would hear about the graduate program. The school has been very supportive of her podcasting for many years.

“I was doing this on my own dime; I wasn’t monetizing it. It was a passion project. For the first 12 years, I didn’t even have a logo. Because I was designing logos for a living, I really didn’t want to commercialize the show in any way.”

In addition to being the Apple #1 All Time USA Design Podcast, Design Matters has won several awards, including the Cooper Hewitt National Design Award, and it has been nominated for the Webby Award six times. But the most exciting part of producing and hosting one of the longest-running podcasts was meeting her wife Roxane Gay—New York Times’ best-selling author of several books including Hunger and The Bad Feminist, who she invited on the show in 2017.

“I kind of fell in love with her from afar while reading Hunger. I felt that her book carved a path into my own heart. I invited her to be on the show after that. She agreed and asked me to get in touch with the PR team at Harper Collins. I wrote and never heard back. Then I wrote again, and again, never heard back. I think I wrote three times, and nothing. Finally, the fourth time, I got a bounce-back message. The PR lead had left the company. So I forwarded the whole exchange back to Roxane and asked if she’d still be willing to be on the show… and if so, could we schedule it directly? She responded, ‘No, thanks. I’m exhausted from the book tour and done talking for a while.’”

Not one to give up—whether in her commitment to Design Matters or in love—Debbie was eventually able to make the connection with Roxane and boldly asked her out on a date. By February 2019, they were a couple, and Roxane finally made her appearance on the show.

“The show isn’t really about design anymore. When I started it back in 2005, I was creating it for a different entity. It was prescribed that I talk about a specific topic, and my expertise was design. As I’ve grown over the years, I’ve wanted to talk about more than design, so I’ve re-engineered what the title means. It’s now a show about how the world’s most creative people design the arc of their lives, with a focus on inspiring people to create who they are through their creativity.”

UTR: Clever – A Podcast about Design

Button, Button… Who’s Got the Button?

Natasha Graziano: Guiding Others To Attract The Best Out Of Life

Forbes named her “the number one female motivational speaker under 40

Julie Amacher, host of New Classical Tracks, not only provides an in-depth exploration and critique of

There is no doubt our idols have a considerable impact on our lives. But have you

UTR: Clever – A Podcast about Design

Button, Button… Who’s Got the Button?