Some people start podcasting and discover they have “a voice.”

George Sirois, on the other hand, discovered he had “a voice” and then decided to start a podcast. It all started back in 2015, when George was losing a job he held as an admin.

“I was really down when that happened. I was just kind of wondering what was going to happen next? What am I supposed to do? You know, I have a wife and a house and everything. What’s the next step for me?”

Then, George came across a documentary narrated by John DiMaggio called I Know That Voice. It pulls back the curtain on what it takes to become a voice actor and spotlights the voice actors who bring amazing characters to life in animated films, commercials, and other productions. George was inspired. 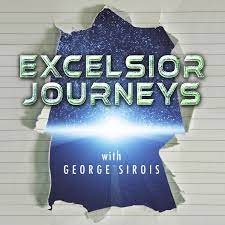 He decided to reach out on Twitter to see if anyone in the St. Louis area taught voice acting and was fortunate enough to garner the support of an award-winning voice actress who recommended Clayton Studios. After some research, George realized he needed to gather some funds for the investment. Already a published author of the international best-selling novel Excelsior and it’s two sequels, he had the idea to reach out to some of his author comrades to do audio narration of their books. He also began a Kickstarter to fund his dream of becoming a voice actor.

The Kickstarter campaign served more than one purpose—in addition to raising the funds to enroll in Clayton Studios, the opportunities that George created for himself to narrate his colleague’s books provided him a lot of practice and allowed him to become really comfortable behind the mic all while building his portfolio as an audio narrator.

“Audio has been a part of my life since I was a kid. I would record little things on my tape recorder and always paid attention to the different voice actors in animation that I watched growing up. It was something that always really appealed to me. Being a voice artist in animation is a lifelong dream.”

When George was only six years old, he produced his first audio project.

“Back in the 80s, there were little storybooks that came with cassettes of the narrator reading it. You’d get a little chime to indicate when it was time to turn the page. When my cousin Matthew was about two or three, he was recovering from cancer surgery and asked me if I could make copies of the storybook tapes I had so he could listen to them while in the hospital. I did one better—I went ahead and recorded myself reading it. I even added that little chime to let him know when I was turning the page. And it was so much fun! That’s what really kind of pulled my attention to audio.”

A really resourceful guy, George had been part of an authors’ roundtable podcast for over two years before he decided to take what he learned and launch his first solo show, Excelsior Journeys.

George, who studied theatre in high school and college, started looking at his Facebook friends and realized he knew a lot of really creative people who were all up and coming in their respective fields. He decided that they needed to be spotlighted, so the world would learn who they are and that it’s okay to focus on your passion.

“You don’t have to be a starving artist. You don’t have to live that life. 24/7, you can make it work within your life and still pursue your passion while paying the bills. I already had the equipment. And I had some podcasting experience. I had never run my own show, but at least I knew enough of the field to go for it. It turns out, I really love the interviewing and getting to talk to people who I admired since childhood.”

Between audio narration, book sales, and his latest full-time job, George has been able to keep it all together and produce and host a show that allows him the delight of speaking to, spotlighting, and catching up with his creative cohorts. Podcasting has also provided him the platform to interview some of the greatest voice actors, movie story consultants, and screenwriters in the industry.

UTR: Good Things in Life for Kids with Disabilities

UTR: A Hot Dog is a Sandwich