Neil Hughes was driven to pick up the microphone by a yearning to connect with people beyond the keyboard. With over four million article views, thousands of shares, and more than 50,000 readers a month on LinkedIn, Neil wanted to engage with fans of his writing in a unique and meaningful way. So, he created his first podcast, Tech Blog Writer.

His fans must have had the same yearning, because his now daily rebranded podcast, The Tech Talks Daily, has over one million downloads and is listened to in over 165 countries. The show features interviews with tech leaders, entrepreneurs, CEOs, thought leaders, and even the occasional celebrity about how technology is transforming their businesses and our lives.

Yet all those numbers I just mentioned do not matter to Neil. His focus is always to serve first, and he is armed with a curious mind and a couple of killer catchphrases to open and close his shows. Neil believes that “Tech works best when it brings people together.” He says it is the “education piece” that gets him.

I think it is the love of stories that drives him. 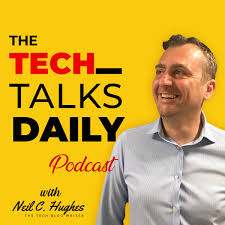 When you listen to any episode, the one component that stands out is how Neil draws the stories and the passion out of his guests. He wants to “tell the stories that need to be told” and address “the elephant in the room” when he is interviewing a guest who might not want to speak about the tough questions that call out to be answered.

As of the writing of this article, The Tech Talks Daily has 1300 episodes logged. Neil still finds time to produce, host, and manage additional podcasts for Citrix, Netgear, and a select few other top-tier technology companies.

Podcasting is his passion, and the podcasting realm he loves to hang in is not the one filled with celebrity and corporation-based shows, but rather, that of the everyday podcasters who strive to put out content even when they cannot see movement.

Neil credits David Ralph, host of Join Up Dots, for lending him a helping hand, support, and the advice that has lifted him higher in his podcasting craft. They met when Neil reached out to David as a fan of David’s top-rated show. At that time, Neil was still in a 9-5 IT job. They became friends over the years, and Neil respects him greatly.

That is who Neil is as a person—grateful for those who have inspired him and helped him and a Go-Giver in the world of podcasting. He feels it is his “responsibility to get the stories out while lifting newer podcasters up” in the same way he was.

Podcasting had always allowed Neil to meld his three passions in life: technology, music, and travel. While traveling to tech conferences around the world, he would always find a venue to listen to some live music and meet up with guests he interviewed for his show. Now, COVID-19-related travel restrictions prevent him from getting out of the U.K. as he would like (and from listening to live music in out-of-the-way locales around the world), but he still gets to share his message as he pursues his love of tech on his shows. Episode topics range from AI to fintech, NASA, email automation, robotics, the future of sports, cybersecurity, apps, and more.

What I find interesting is that, even after 1300 published episodes of just one of his podcasts, Neil’s curiosity has never waned. If anything, his curiosity and zest for learning has grown, and his questions consistently drive his interviewees even deeper into sharing as he draws out conversation beyond the surface level of the topic.

“Some days,” Neil says, “it feels like my head is going to explode, because there is so much information coming my way. But ultimately, that’s OK.”

Because for Neil, it is not just about reporting on the technology. He wants his guests to share their knowledge, skills, and failures as they developed revolutionary technologies or new ways of doing business and took their leaps from theory to practical application—and how these types of advancement affect the average person on an everyday basis. That goes back to his mission for the show: to connect how technology is changing our businesses and lives, and to demonstrate how technology works best when it brings people together.

There might not be a “noble cause” behind every guest on the show, yet one can sense Neil would love for everyone developing tech to have a noble cause in mind to change the world in a positive way.

Considering the number of people banging down his door to get on his show, I was surprised that there is one elusive guest he has not yet been able to land—Elon Musk. When I asked, “Why Elon?” his response was perfectly Neil:

“He thinks bigger. Bigger than his city, his state, his country, and even this planet.”

If you have a connection to Elon Musk, let Neil know… because he too thinks bigger, and encourages his guests and listeners to think bigger too.

Gaslight: Who Can You Trust?

Grow Your Following with Hashtags, Consistency, and Automation: Darren Bruce