Andy Kushner, executive producer and host of The Music Makers, gives listeners access to behind-the-scenes stories from some of the most influential music industry pros. For the audience, it’s a rare opportunity to go deep into the psyches of artists, record producers, songwriters, recording engineers, managers, and record industry executives.

“I’ve had record execs like Clive Davis and Jerry Moss, producers Tony Brown and Mark Wright, artists, ‘big hit’ songwriters, and major instrumentalists on the show. For example, I recently released an interview with Nathan East, who’s probably the most recorded bass player in history. I’ve also interviewed composers and publishers, as well as managers like Shep Gordon and Jeff Robinson. I just love digging into different aspects of the music business and going deep with these individuals to get their backstory, find out how they got to where they are today, and learn about the struggles they still go through.”

Have you ever considered the countless hours of work needed to make the Grammys happen each year? After all, it is “music’s biggest night.” This is just one example of the kinds of topics and the inside scoop listeners get when they tune into The Music Makers.

Robert Kraft, former President of Music at Fox Film, now President of Kraftbox Entertainment, has high praise for Andy. “[He] is one of the smartest interviewers I’ve met. As a musician himself, he knows how to pose thoughtful and unique questions and dig deep into the inner workings of the music industry.”

Andy started his first band at 15 years of age. Within two years, they were performing in front of thousands at the Tampa Bay Rowdies soccer games. Fast forward decades, and his band, SoundConnection, is considered one of the top cover dance bands in the nation.

“My parents were not full-time musicians, but my mother played piano and sang background vocals while my father sang lead vocals and played guitar. I was told that when my mother was pregnant with me, my parents used to play incredible jazz and pop music. And as I was growing up, I heard lots of music in the house. 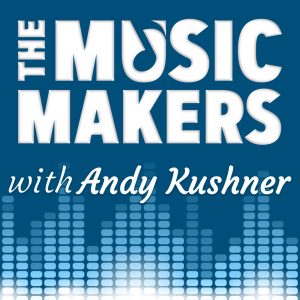 “I thought if I started my own band, I would have an opportunity to get out there and make things happen. Since I had my own vision, I was very excited about it all. To this day, I love the chemistry of finding different kinds of musicians and singers and bringing them together. It feels like there’s a chemical equation when you combine certain personalities and abilities. It’s incredible!”

With lots on his plate, Andy has come to appreciate the importance of having the right team around him, whether it’s the right kind of band members, music director, onsite leaders, or a supportive team for a podcast.

“You’ve got to find like-minded people, and I’m learning more and more that surrounding yourself with people who are at the level you would like to be at, or who share that vision, makes the journey so much more fun and so much easier. I’ve been honing my team more and more to help me pull off my vision.”

Andy’s three tips to frame a request for a big dream interview are:

The Music Makers perfectly represents what means a lot to Andy:

“I’ve always been fascinated by people’s stories, even years ago before interviewing. I always loved to meet new people and find out more about them.

“I grew up loving people who can communicate a message, whether they were lecturers, or comedians like Richard Pryor and George Carlin who got their message across through their comedy. I also love listening to Martin Luther King’s speeches and seeing Dick Gregory and Elie Wiesel. These are people who can really express themselves, and I soak that in. It has also been very important to dig into learning more about myself and figure out how to apply what I discover. I’ve learned a lot about the right questions to ask and how to communicate with people in order to elicit a meaningful response.

“Having this podcast is a game-changer, even a life-changer for me,” Andy reflected. “I think new podcasters, and I include myself here, start out afraid to take that first step, but you’ve just got to jump into the water and get wet. That’s how you learn.”

Andy isn’t resting on his laurels, so the possibilities are endless.

“My dream interview with someone I haven’t gotten yet on my podcast is Stevie Wonder, one of my favorite singers.”

In the midst of his aspirations, Andy still recognizes the importance of being centered. He credits his fiancée, Sharon, with helping to ground him. “I feel like I have a foundation beneath me that helps me go for all the other crazy stuff.

“Also, getting outside and hiking really grounds me. We’re on a planet that’s just hurtling through the sky. When you think of that, nothing is such a big deal.

“Both Sharon and I also love going to concerts, too. It’s a great way to be constantly inspired. It’s really exciting to anticipate getting out there and seeing live performances again. I can’t wait!”

UTR: You Haven’t Heard This Music

UTR: You Haven't Heard This Music