The release of this issue of Podcast Magazine® falls between two significant calendared events: Police Week in May and Father’s Day in June. Although the in-person activities of Police Week have been moved back a number of months this year due to COVID-19, I still thought this the perfect time to celebrate John Jay Wiley—a retired police officer, awesome father of two daughters, and great podcaster.

When you listen to just the first minutes of any episode of Jay’s True Crime Fighters, you quickly realize that he has a voice for radio. When I sat down with him recently, we joked about both having a face for radio, too.

In continuation of my joking mode, I asked him which was tougher—being a police sergeant or the dad of two adult-aged daughters? His response was very poignant and revealing:

“I think of all the aftereffects of the violence and trauma related to police work that have negatively impacted my ability to be a father,” Jay admitted. “Or at least, to be the father I wanted to be. [The job] definitely had a profound impact on not just my first marriage, but my time with my children and everything else. I have to put the burden where it belongs. It was my inability at times to handle things better. Granted, there are a lot more tools available now. We know a lot more than we did back then. But I have to own up to my part of it.”

Jay’s refreshing self-awareness is also a reminder of the toll police work takes not only on the officer, but on the entire law-enforcement family. The job also often nurtures an interesting sense of humor, as evidenced by Jay’s idea of “one of the great things about having children”:

“I always tell them how much enjoyment I get out of embarrassing them,” Jay confessed. “It’s just another service I gladly render any chance I get… especially in front of their friends.”

Jay approaches True Crime Fighters with the same amount of heart and passion as he has for fatherhood. He explained how the title was more than just a play on words for a podcast in the true-crime category.

“When I was in the Baltimore Police Department, we had different terms we would call each other,” Jay explained. “For instance, there was ‘good police,’ ‘real police,’ ‘hump.’ The last one was someone who did very little. You also had report-takers who were basically mobile secretaries. And then you had crime fighters.”

He went on to explain that the “crime fighter” label was a true compliment. (Unless it was used in a certain tone or context, such as, “He thinks he’s a real crime fighter.”) 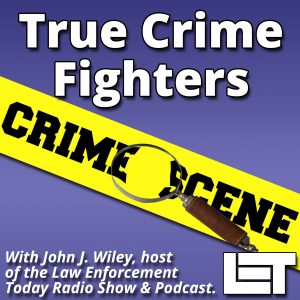 Jay went on to share his appreciation for the true-crime category, but he also feels there is not enough coverage of those who fight crime. He used the Ted Bundy case as an example.

“Everybody knows Ted Bundy. Everybody knows what a vicious killer he was,” Jay exclaimed. “But a lot of people don’t know the people who prosecuted him and put him away. Working on that case took two years out of their lives. I think that the people who fight crime should get at least as much mention as the bad guys.”

Jay pointed to some of the heroes he has featured on True Crime Fighters. “Bass Reeves was born into slavery, and he became one of the most prolific law-enforcement officers as a U.S. Marshall back in the day when they didn’t have all of the equipment they have now. He served into his late 80s.

“Miosotis Familia of the NYPD, Gail Cobb in Washington DC, Kyle Dinkheller,” Jay continued, “were all killed in the line of duty. They each performed heroically and valiantly. Someone needs to tell their stories. Let’s not just tell the stories about who killed them. Let’s tell the stories about who these officers were and what they overcame to get to where they were.”

Gail Cobb’s story was particularly intriguing to me, as she was the first female police officer in the United States to be killed in the line of duty. That was in 1974. But Jay goes even further back in history in some episodes.

After Jay’s law-enforcement career, he was a radio personality before podcaster. I asked how radio prepared him to be an expert podcaster.

“I had a love affair with radio when I was a kid,” answered Jay. “I remember when FM came around. They couldn’t get advertisers, so they’d play whole album sides. They’d have a guy who sounded like he smoked a carton of Marlboros on one match talking between sides.

“One of the things we would do was build our own radios. At night, we would listen to people talking in far-away places like Cleveland, Philadelphia, New York, and Boston. They were playing the same music, but the commentary was around what was happening there. It was an adventure. So I always had a love affair with radio.

“Then, I remember walking a footpost as a young police officer in Baltimore,” Jay continued. “I walked into a barber shop to say ‘Hello’ one day, and the guy said, ‘I love your voice! You need to be doing voice-overs. You need to be on radio. When you retire from police work, pursue this.’ That stuck with me.”

Unfortunately, due to an injury, Jay was forced into early retirement at 33. But his radio career was born when he became the Afternoon-Drive On-Air Host of WDDH’s The Hound in Ridgeway, PA. He went on to become the program director and on-air personality for WKYZ Pirate Radio Key West.

“One of the main things I hear from podcasters all the time is ‘How do I get more people to know about my podcast?’” Jay shared. “With the L.E.T. Podcast Network, we put them on lawenforcementtoday.com, which is a huge website. It gets lots of traffic. It’s also heavily advertised on my syndicated radio show.

“I root for the underdogs,” Jay continued. “It’s about trying to give someone a leg up. There are a lot of big players in this field and a lot more of them coming into it every day.”

It’s clear that Jay understands the business of podcasting and driving more listeners to his shows. That is one reason for his looking closely at the current format for True Crime Fighters.

“The idea was to do a short-form, narrative-type podcast that tells these important stories in 15-minute, easy-to-consume episodes,” Jay mentioned. “But sometimes, it sounds like lecturing, and it loses some of that human feel. The reality is, I want my wife to get involved. We may do a duo.”

It’s not like she doesn’t have the experience—she was Jay’s co-host on radio. “She has a great voice, and she is a wonderful person. We’ve been happily married for over 20 years, and it’s one of the best things that ever happened to me.”

We talked about how the discussion between two hosts would only add to these stories. “We’re going to expand into prosecutors, more civilians, and more officers who died in the line of duty as well. There are some tremendous heroes out there. Someone should tell their stories, and I’m not opposed to someone doing it with me.”

Jay is clearly passionate about three things: being a husband, being a father, and continuing to tell the stories of True Crime Fighters. Personally, as a fan of the true-crime genre, I am looking forward to the future of this podcast as it tells both an intriguing and important part of the narrative within this category.