The bantha in the room—or the Zoom, to be exact—was how a podcast about podcasting can be considered a technology podcast. (With podcast host Mark Asquith’s love of Star Wars, we couldn’t talk about the ‘“elephant” in the room, so I of course needed to find a reference from that world!)

Mark and I quickly went down the rabbit hole of how the reduction in podcast categories by Apple made it more challenging to determine categories for shows that might not fit the usual and accepted definition of a particular category.

True to the nature of the disruptor he has become, Mark is even shaking up podcast categories as we know them to find the right fit for his podcast—The Podcast Accelerator. Finding it in the technology category might seem like “square peg, round hole” as he puts it, but it works… just like the multi-color nail polish he let his niece paint on his nails shortly before our interview.

Mark, aka “The British Podcast Guy,” is guided by two things when it comes to business decisions: instinct and pop culture. First, he has learned to trust his intuition when it comes to seeing opportunities and what can be done with them. Second, if “pop culture” isn’t top of mind when you think of Mark, just take a look at his company name: Rebel Base Media. 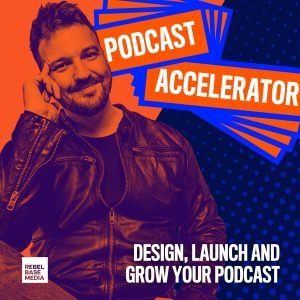 Rebel Base Media is an apt name for a company run by a man who is determined to disrupt the media and podcast industry by making it easier for the unique voices that make up independent podcasters to create content and, if desired, find a way to monetize it.

Interviewing him via video illuminates several other pop culture references in his office, and they’re not just related to Star Wars.

How did this rebel get into podcasting? Back in 2013, he and a friend were doing a blog about DC Comics when his friend said, “Let’s do a podcast.” Mark initially declined, because like many others in the UK at the time, he had an image of podcasters as guys who sat in their basements in their underwear talking about Superman and Batman and other topics, because as he said, “That’s how podcasts were painted in the UK, because we were so far behind.” But eventually, he relented, and that podcast led to his co-hosting the Spark of Rebellion, A Star Wars Show with Garry Aylott.

And that podcast led him to start a podcast about business, The 7 Minute Mentor, because as a successful owner of a design agency in a “tiny mining town that no one had ever heard of,” he was asked a lot of questions about business.

When I asked him how all the dots came together to get him where he is today, Mark said, “I am a ‘do-a-thing-first-and-think-about-it-later’ kind of guy. It’s like being a kid who climbs a tree and doesn’t worry about falling. When I started in podcasting, I was that kid. I saw an opportunity that was ripe for new solutions.”

Mark is definitely a solutions guy, too. When he sees a problem, something inside of him lights up, and he dives right in to solve them. He loves to research and go “all in” to learn what is out there, what is needed, and what people don’t even know they need yet. One might even say that is his “superpower.” (Yup, I had to go there. I mean I started this article out with a reference to banthas, so why not hit the superhero reference, too?)

And make no mistake… to many podcasters, Mark is a superhero.

After investing tens of thousands of pounds (remember, Mark is from the UK) and years researching the medium by attending and speaking at conferences and asking lots of questions of existing podcasters and the vendors who support them, Mark launched the first-ever growth-oriented host platform, Captivate. As a marketer and tech geek, he wanted to make sure that Rebel Base Media solves the problems he sees happening in the industry.

The suite of products he has since created help change the way podcasters create, produce, and distribute their content and how listeners find the shows they want to hear.

But that is not his only superpower. Mark is all-in when it comes to the industry of podcasting. He doesn’t care if you sign with another company to host your podcast. He feels it’s important to “Find someone you get on with, because you’re going to be working with that person every day.”

Mark’s motto: “Whatever I can do to help.” Why? Because relationships matter to him. All those years of researching the podcast medium taught him two things: that relationships are what drives him, and that the trick to finding out what the problems and struggles are is to ask.

Mark said he loves being able to “talk to any founder of any given hosting platform over a beer and act like friends, talk like friends, and be friends, because that’s the type of industry that podcasting is. It’s a genuinely personal business.”

I love that thought as well. With each new announcement of a show joining a podcast publisher, or a publisher being bought by a distribution platform, I think of Mark’s words I shared with you in this article and Todd Cochrane’s in my feature article in the November 2020 edition. I am thankful that Mark and others are there to keep the independent voice creating, and to keep that personal relationship between podcasters, their peers, and listeners alive and vital.

UTR: In Machines we Trust