After several years of friendship, Jen Smedley and Kristin Hensley found themselves on stage doing an improv comedy skit together, and they understood for the first time why the universe connected them.

A “great” comedy duo is the exception, not the rule, among comedians. “Martin and Short,” “Laurel and Hardy,” and “Martin and Lewis” all had something special. To be successful, the two comedians must not only have amazing chemistry between them, but also share that same chemistry with the audience.

Born from that improv moment on stage, Jen and Kristin’s comedy duo show, I Mom So Hard, was released on Facebook via a simple [2:40]-second video. It was intended to be an introduction of themselves and the show they were about to begin.

Except Jen had a moment—one all moms share, understand, and can laugh at. And in a way only best friends can do, Kristin poked fun, and they laughed together at the utter ridiculousness of motherhood. Then, the viewers answered every question Jen and Kristin had about the viability of their show idea. In just a few hours, their brand-new I Mom So Hard Facebook page grew to 170,000 fans. 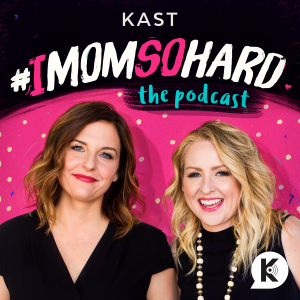 Whether they’re trying on swimsuits, going through the contents of their purses, or comparing the health benefits of spin class vs shopping with kids, their ability to find the humor in every moment of motherhood has earned them 2,000,000 fans every week.

A comedy duo with chemistry like theirs must come from a lifelong friendship stemming from childhood, right?

Jen and Kristin grew up in Nebraska, both with the dream of marquee lights in their future. From an early age, they wanted to be on stage, making people laugh.

In high school, while other kids were in band and soccer, Jen was part of a comedy group that played comedy clubs and other venues. Meanwhile, Kristin organized a clown troupe and actually booked gigs for the group.

Both of them had this maturity about themselves, their own abilities, and where they wanted to go in life at a very early age.

After high school, they both attended the University of Nebraska in Lincoln. And then, after college, still maintaining their goal of being on a stage, they left Nebraska for the entertainment capital of the world, Hollywood.

Kristin’s career in Los Angeles began with acting in commercials, teaching comedy improv, getting parts in sitcoms, and any comedy work she could find. Similarly, Jen worked with Second City on comedy, landed parts on TV shows, and did voice-overs for cartoons like Bob’s Burgers.

A few years after moving to Los Angeles, Jen’s comedy team put on a performance, and Kristin was in attendance to watch. The show was great, and everyone hung out after the show.

That’s when Jen and Kristin met for the first time.

You read that right. Both grew up with similar dreams. Both grew up in Nebraska. Both attended the University of Nebraska at Lincoln. Both moved to Los Angeles to pursue their careers, yet neither had ever met.

But by the time the night they met was over, they had discovered all those coincidences, even learning that they lived two blocks apart and drove the same kind of car.

The Universe had spoken.

I Mom So Hard is now fours year old. In our interview, Kristin said, “If we ever did a TED talk, it would be titled, ‘You’re Always Going to Do All the Work.’” Why? Because their work partnership has produced more in four years than most achieve in a lifetime, and they have been behind every step of it.

Shortly after their success on Facebook and YouTube, Jen and Kristin put together a 72-city stage show tour that took them all over the U.S. and Canada. They followed that up the next summer with a 53-city tour and are already planning one for 2021.

During that time, they got a Harper Collins book deal that resulted in a 2019 New York Times Best Seller.

Did I mention they caught the attention of TV producers who got them a show development deal and recorded a pilot episode?

They also had their stage show professionally recorded and available on Amazon Prime.

Now, they’re back to figuring out how to produce regular content while protecting their families from Covid. And maybe, just maybe, they have a children’s book coming out in 2021.

All this while juggling two very young children each, “whatever their names are.”

Now, you can catch the I Mom So Hard podcast on every major podcatcher. If you start listening today, today’s the day you’ll have two new best friends.

UTR: We Got This! with Mark and Hal