When Not Real Art co-hosts Man One and Scott Power came together, they brought with them a wide variety of experience and various levels of attainment in the visual communication space. Coming from different backgrounds—Man One with the pure contemporary fine art background and Scott steeped in the agency commercial art and marketing side—they knew right away they’d make a great team.

When they met, Man One owned and ran a gallery, and Scott had a minor part in that operation. From that initial collaboration, they developed a shared ethos centered on the following questions:

How do we help artists?
How do we celebrate and elevate artists?
What do artists really need to be successful?

“Sometimes, artists think they know, but oftentimes, they really don’t. And we’re arrogant enough to think that we actually know better. One of the things we’ve always noticed is that artists really need help telling their story and promoting their work. The issue is that supply outstrips demand—there’s way more art out there than demand for it. So, how can we stoke demand for art and storytelling in the entertainment media? In our view, this is a great way to help artists in a meaningful way.”

Man One chimes in:

“We’ve known each other since the early 2000s. Scott is originally from the Chicago area, and he had signed up for a conference I was speaking at but couldn’t make. So one day, he just rang me to say he was really interested in what I was doing. I was working with a lot of brands at the time and as a graffiti artist in LA as I tried to get my art out there and do stuff for brands. We began working together, and everything kind of just evolved. We basically became brothers the day we met. It was just a natural progression.”

In its ten years, the Crewest Gallery produced 100 shows representing 2000 artists from 20 countries. Even though it was an incredible experience for Man One and Scott, there came a moment when it was clear that it had served its purpose.

Thus, Crewest Studio—a full-service creative agency—was born. The guys began working with brands again and more closely with artists. Drawing on their lifetime of connections and amazing network of artists, they realized they could connect the dots in interesting ways, which led them down the art-licensing road, where they began representing artists as licensing agents.

Having recognized that they and their “crew” of artists are part of the $2T creative economy and that artists are underserved by mass media, they decided to start a media company as the foundation for their branding work. They have a vision for becoming the go-to media company—a trusted destination for people who work in the arts from a media perspective.

“If you’re a sports fan, no matter which sport, you go to ESPN to scratch that itch. What if you’re a creative? Someone in the creative arts—an artist, arts enthusiast, or somebody who is just really interested in creativity—where do you go? We thought we could be a player in that space.”

Over the years, these creative collaborators have engaged in such deep phone conversation with each other about topics ranging from one end of the spectrum to the other that both of their wives commented on how they talk too much. They certainly weren’t going to shut up, though, so naturally, they decided to start a podcast. A few years ago, when they began looking at the medium, they became involved in helping produce a couple shows. But at the end of the day, those shows weren’t their own… and that’s when they launched Not Real Art. 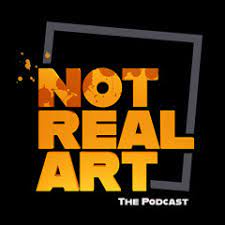 What’s really cool is that Not Real Art isn’t just about a podcast. Scott and Man One wanted to create an ecosystem of symbiotic programs that supported one another, thereby creating a virtuous cycle. Incorporated into the brand is both their artist grant program as well as an artist’s conference, which work in concert with the podcast.

“When Scott came up with the idea for Not Real Art, I loved it immediately. I said, ‘That’s it… that’s the name. Let’s do it!’ I told him that I want to keep doing it as long as it’s fun. Once it starts becoming work, I don’t want to do it anymore.

“Scott does all the prep work, editing, and all the hard stuff. I just show up and riff off the top of my head, bringing whatever I have… which is not much, sometimes, but it makes for fun conversations.”

The Not Real Art podcast mirrors the guys’ telephone conversations in that they talk about everything culture, music, and art under the umbrella of their experience being artists and growing up in the art culture, where everything moves 100 miles per hour.

“Of course, we didn’t know what we didn’t know! We got excited, went to Guitar Center, and my wife saw a $500 charge for a podcasting kit come through in real time. She jumped on the phone to ask why I was buying stuff from that store. I simply said, ‘We’re starting a podcast.’”

122 episodes later, it’s been a great ride. These friends have learned a lot and helped a lot of artists in the process. All they do is about empowering artists…. helping them learn the things they weren’t taught in art school while giving them an opportunity to network, grow, and learn from a business perspective.

Scott and Man One celebrate, empower, and elevate artists—even and especially those whose work might be judged erroneously as “Not Real Art.”