Just before lockdown in March of 2020, Brett Stanley launched The Underwater Podcast as a “purely selfish way” of getting to speak to other photographers, cinematographers, talent, and stunt people in the industry while exploring anything to do with underwater cinematography and photography.

Over the last year, it has become so much more.

Not only does Brett have the pleasure of sharing an insider’s view of this highly specialized niche in the photography world with his audience, but he’s also discovered that he is now positioned on equal ground with people he looks up to as “heroes” in the industry.

“It was this kind of leveling-up situation where I suddenly felt amongst peers—others of my kind. Being able to speak to them and talk with them about the technical things that I thought no one else is really interested in was just really, really cool!”

Outside of podcasting, Brett runs an underwater portrait studio, and it’s just as it sounds—people come to him and pay him to shoot them underwater. He’s been both an underwater photographer and cinematographer for almost ten years, which has taught him to be proficient in calming people down and helping them feel relaxed, safe, and comfortable underwater, becoming perfect subjects for his magnificent photography.

In general, the people listening to his podcast aren’t likely to become his portrait clients, though; rather, the majority already shoot underwater and are looking to better their skills.

When the COVID-19 lockdown killed a lot of his main business, Brett started delving more into that educational aspect of underwater photography in his podcast and subsequently received a lot of work providing mentoring and workshops, which was something he wanted to do anyway. The podcast has given him a bit more of an audience to offer those types of services to, and it’s growing with every episode.

When contemplating how to monetize the podcast itself, Brett didn’t really want to get into selling advertising. Even though the show is highly niched, he didn’t think he had the kind of listenership that advertisers generally look for to make the sort of money that would allow him to sustain the show and turn it into a business of its own. 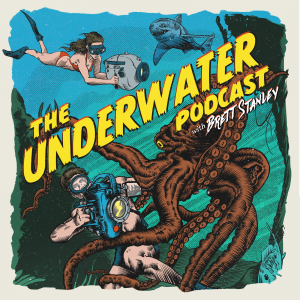 “For me, the podcast was always a vehicle for making people aware of the other services I offer. You know, rather than trying to force-feed advertising down their faces, it was more about just putting an awesome show out there. And then it’s like, ‘By the way, I do these things, as well.’”

Some of the key things that he has learned as a result of hopping behind the microphone?

“I’ve learned to be able to listen and have a conversation with someone that has value. We’re not just having a chat about the weather. My podcasts are very organic. I don’t tend to write questions; we just kind of end up where we end up. And I quite like that, and being able to have a conversation with someone who other people want to listen to… that other people find fascinating. And then other people tell me, ‘Oh, no, you asked all the right questions.’ That was something that was really eye-opening for me. It made me feel really good about growing that skill set in myself.”

As with anything new, Brett has come up against a few challenges, including booking some of the bigger names who have been doing underwater photography for decades. Often, it’s a process even figuring out how to contact them. Booking and managing guests were things he’d never done before, so learning the process of trying to track someone down and then pitch the idea of appearing on his show were all surprises.

“When you’re first starting out, it’s very hard to approach someone and say, ‘Hey, come on the show’ when you haven’t even recorded an episode yet. I was quite lucky, because I know a lot of people. Many were very surprised that I wanted to talk to them. I think they were kind of like, ‘But why?’ So getting them booked and then having the chat and all that sort of stuff ended up being really good for them, as well, because they realized they have things to say that people want to listen to.

“Last year, because of the whole lockdown, I was fortunate to get access to people who would normally be on location or working, but who really had nothing else to do but talk to someone like me on the Internet. So it was really good. I think I got a lot of people interested because they weren’t working. But on the on the flip side, I had other people who were wanting to schedule a year later, because they were too busy homeschooling their kids during the pandemic.”

When travel opens up again, Brett will likely get back out on the road for location shoots on films, so he’s figuring out now what equipment (in addition to his underwater photography and cinematography gear) he’ll need to be able to keep The Underwater Podcast in momentum. One thing he’s considering is doing interviews on location with colleagues and peers and talking about what’s happening as it’s happening—kind of like what he does when he works in the water—having conversations that are in the moment and in the flow.

About being an underwater photographer, Brett says:

“The main thing the water has taught me is a way of letting things go. It goes back to that calmness, because you don’t want to fight the water. If you try to, you’re never going to look as good as you do if you just let the water take control. And so there is that element of letting go… of just giving in and trusting that things are going to be fine. It’s when you start to struggle that things get a little dangerous.”